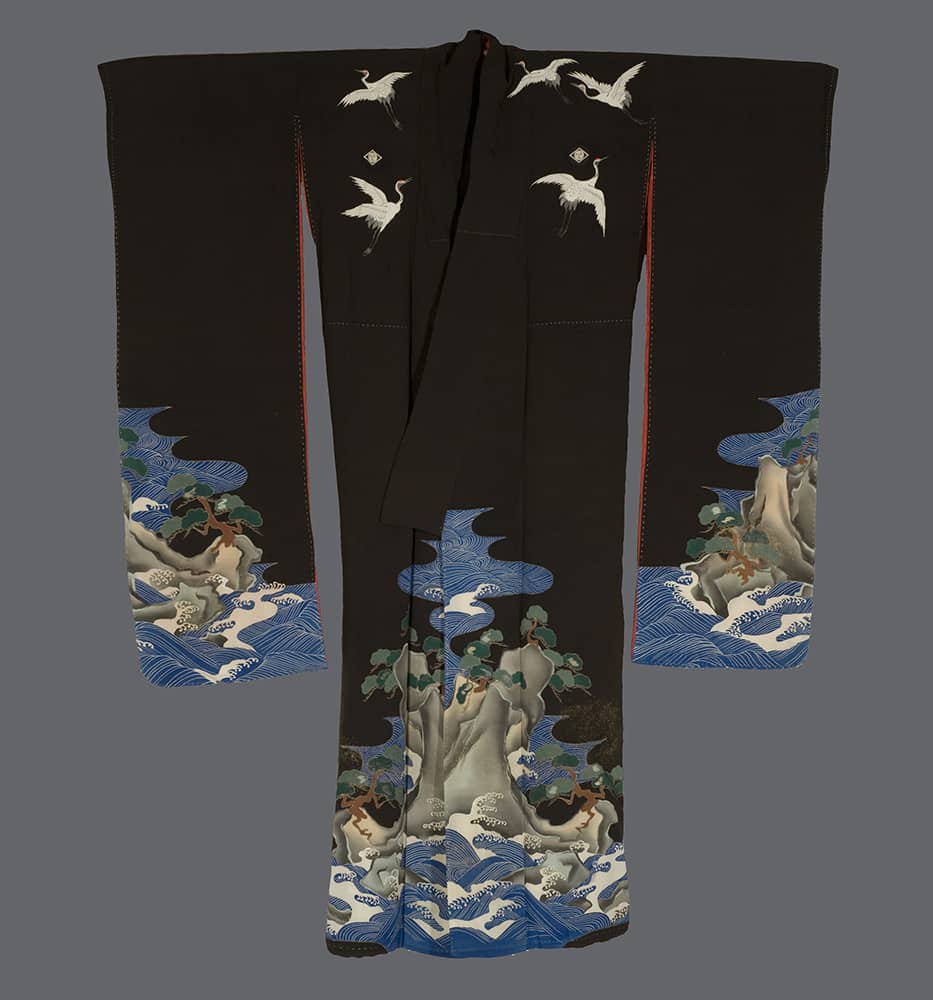 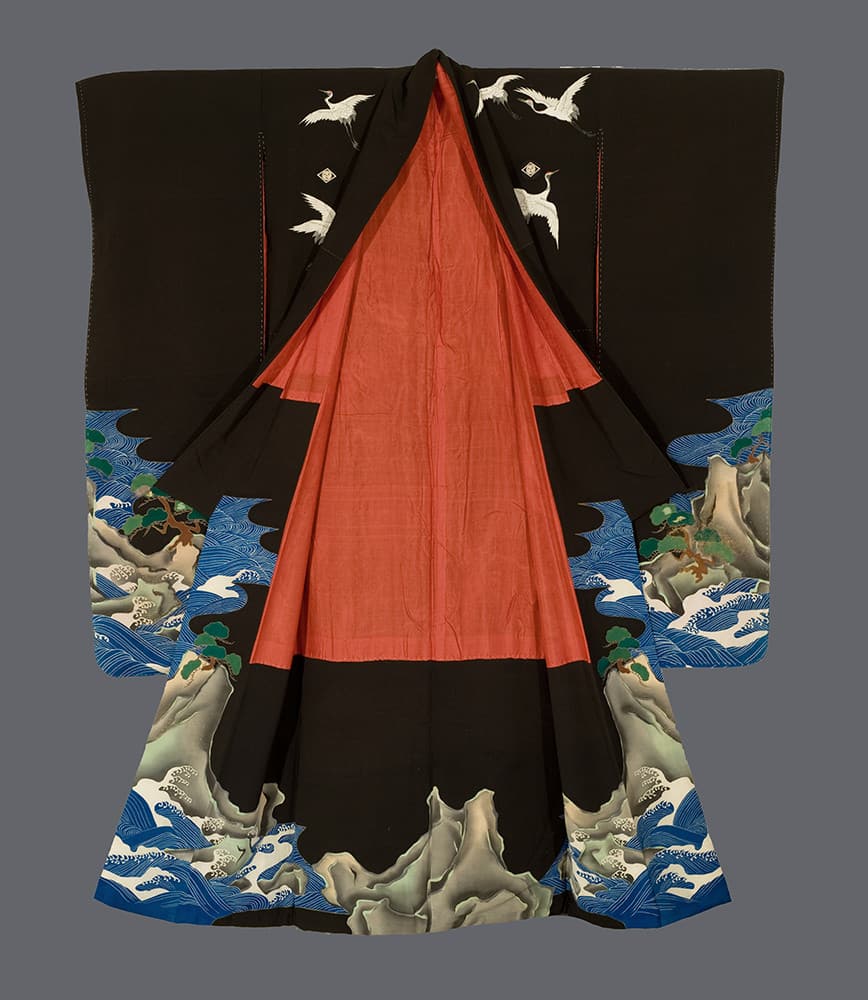 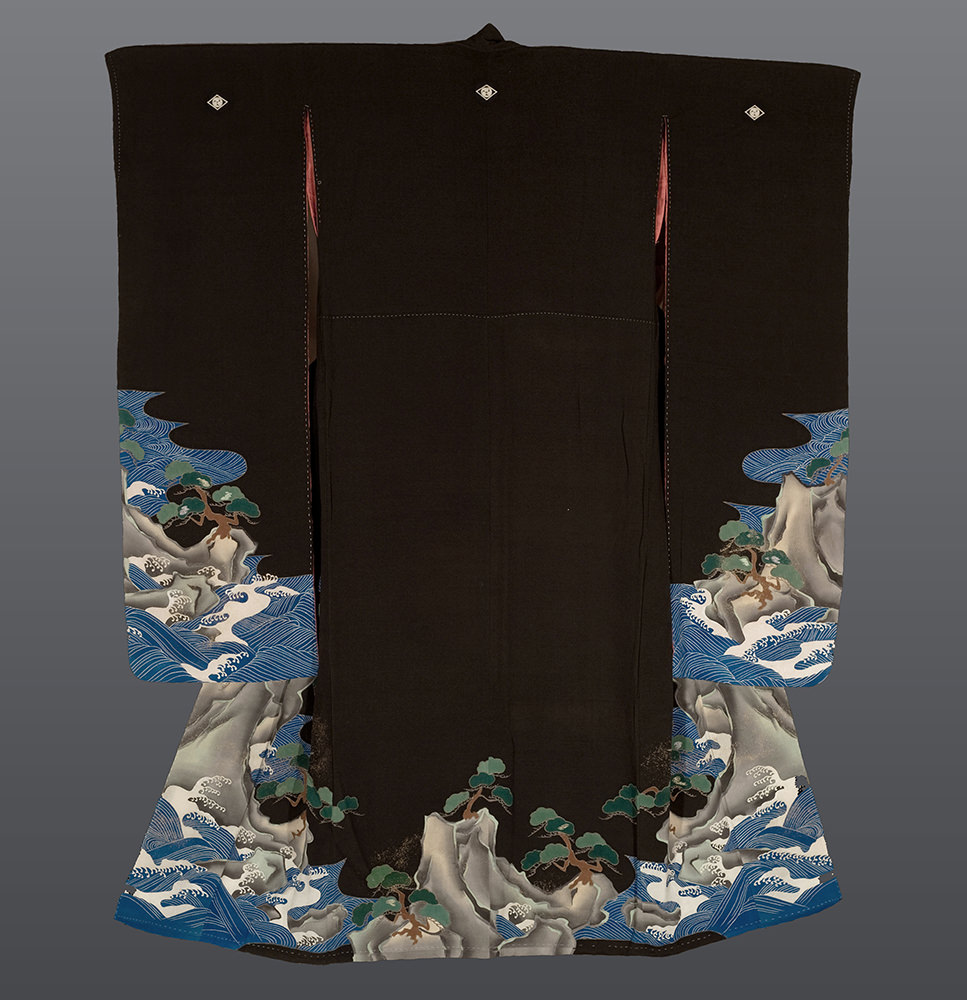 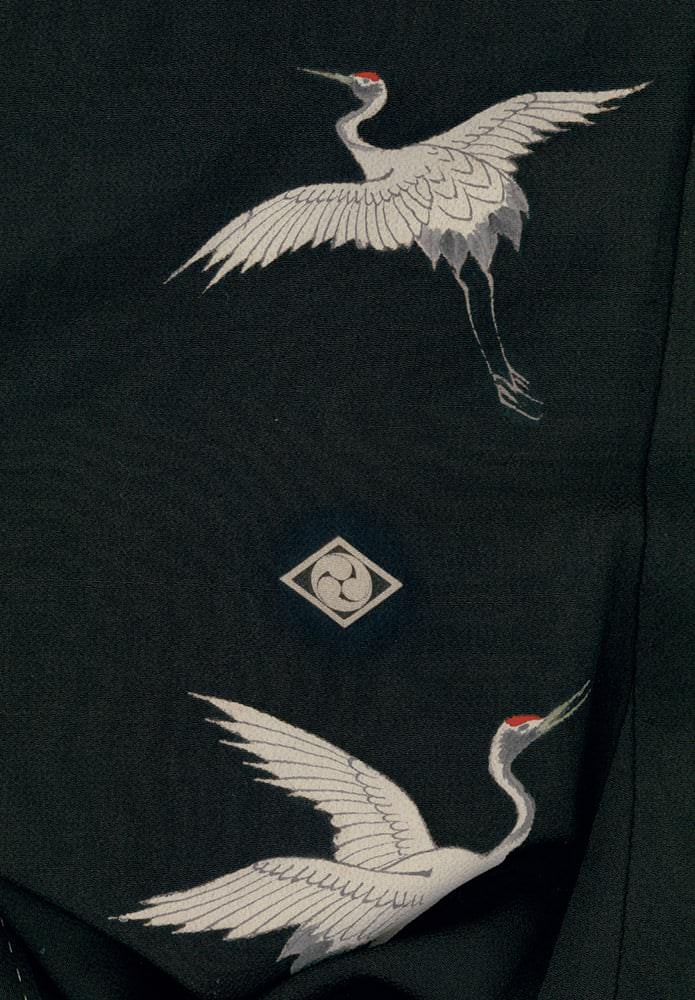 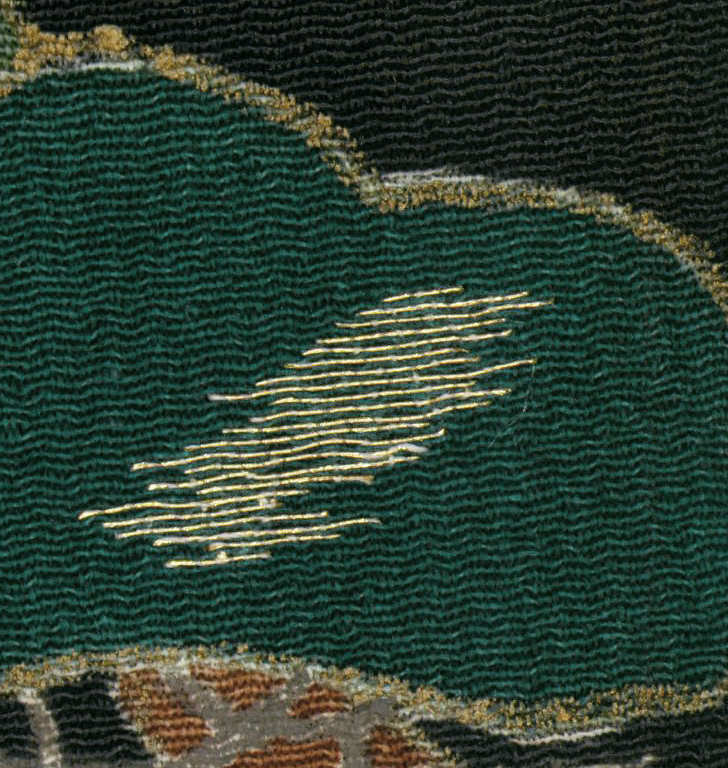 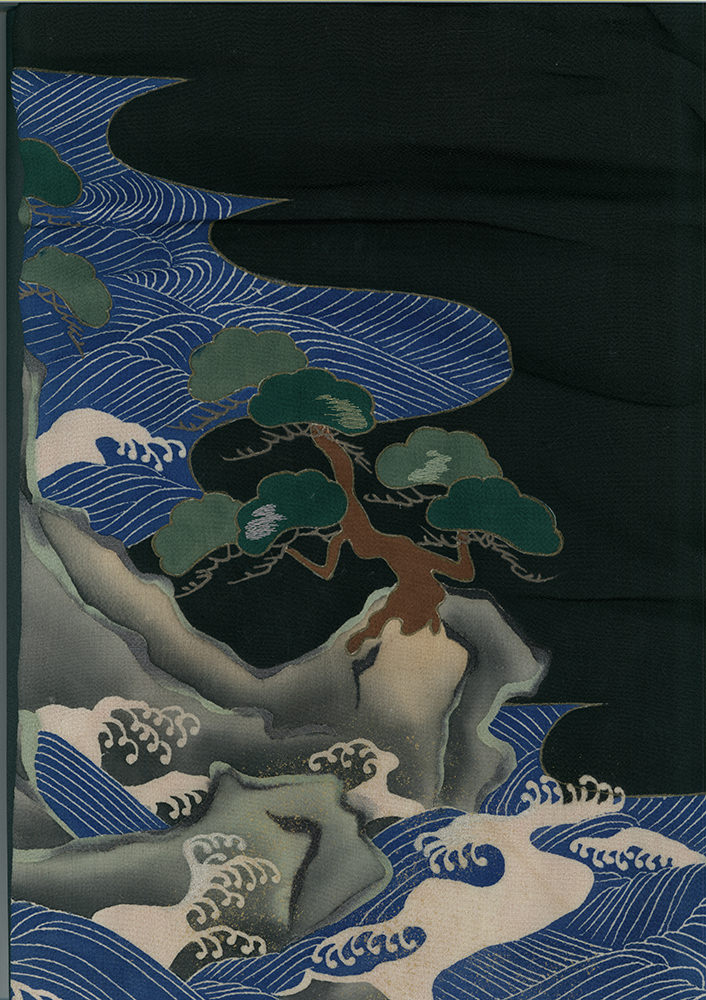 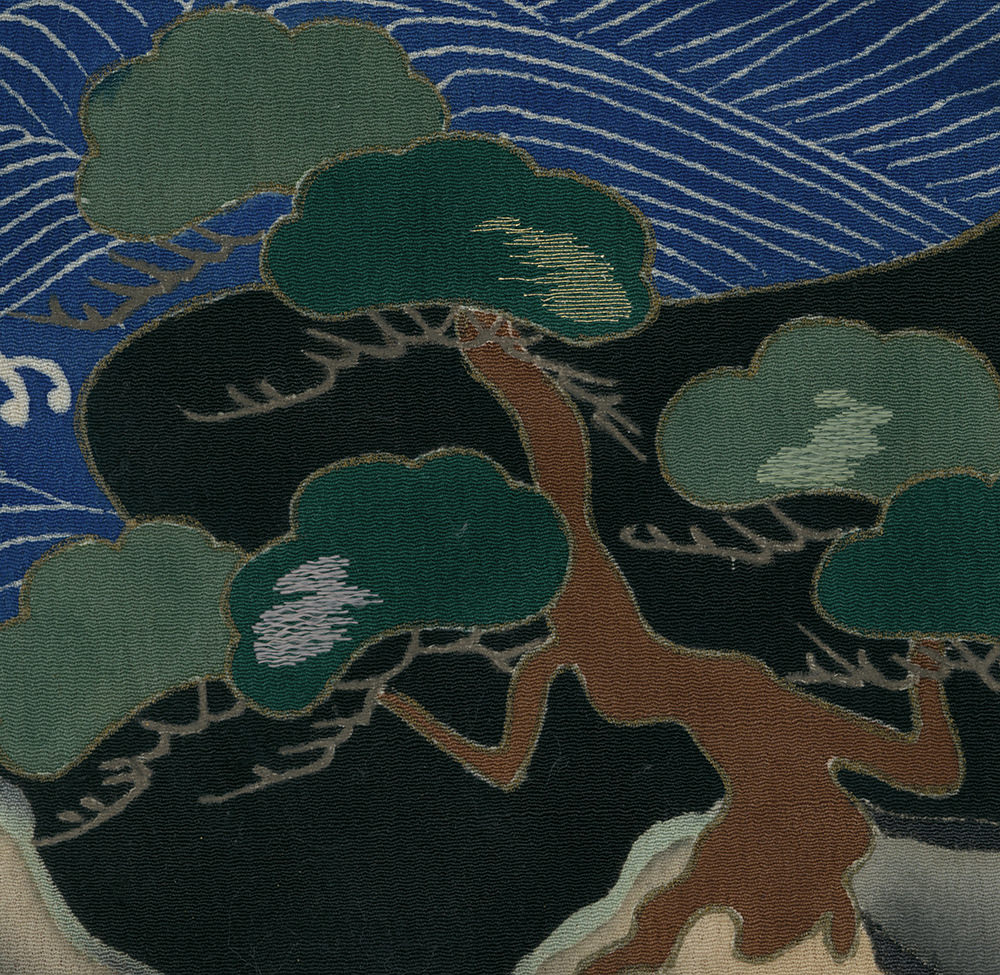 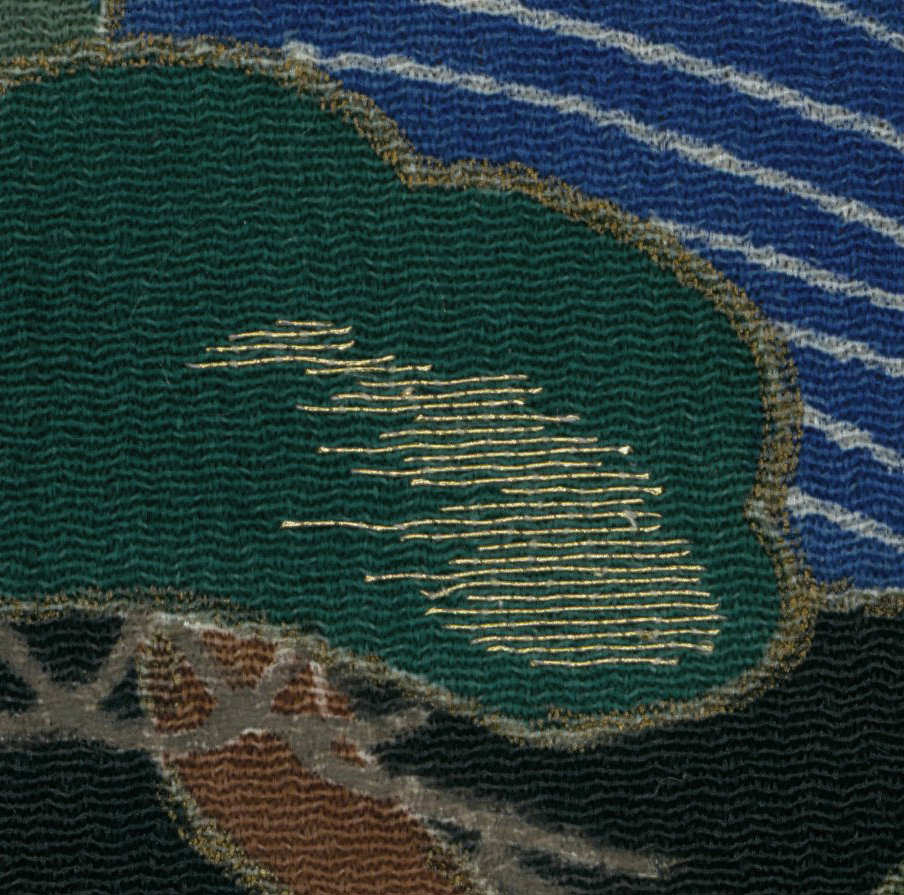 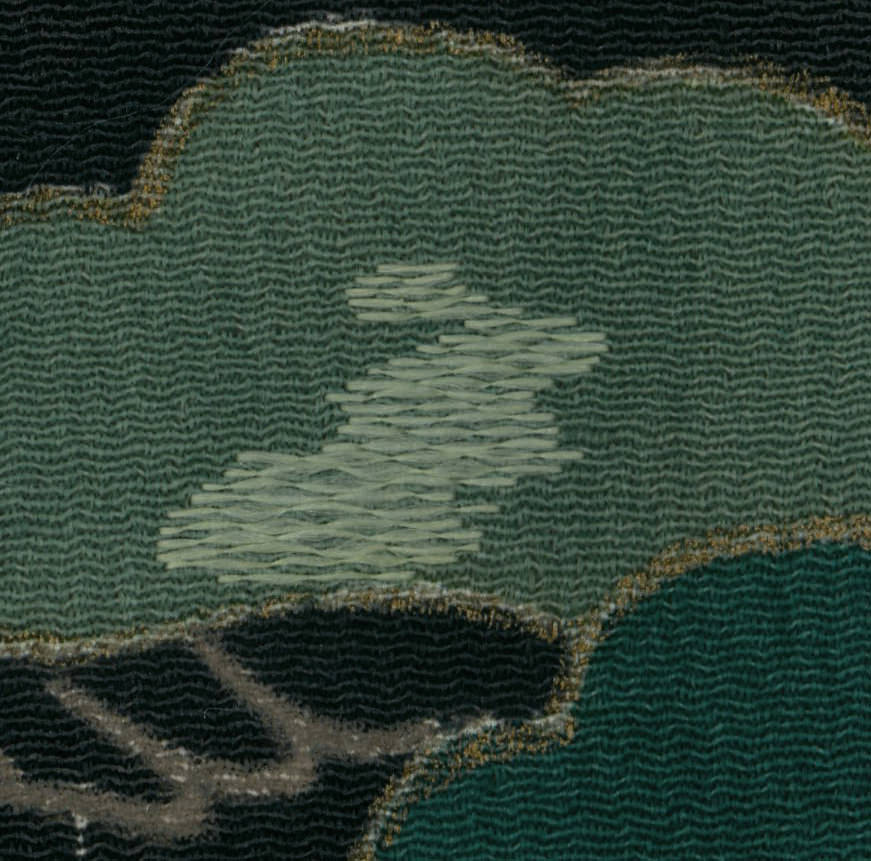 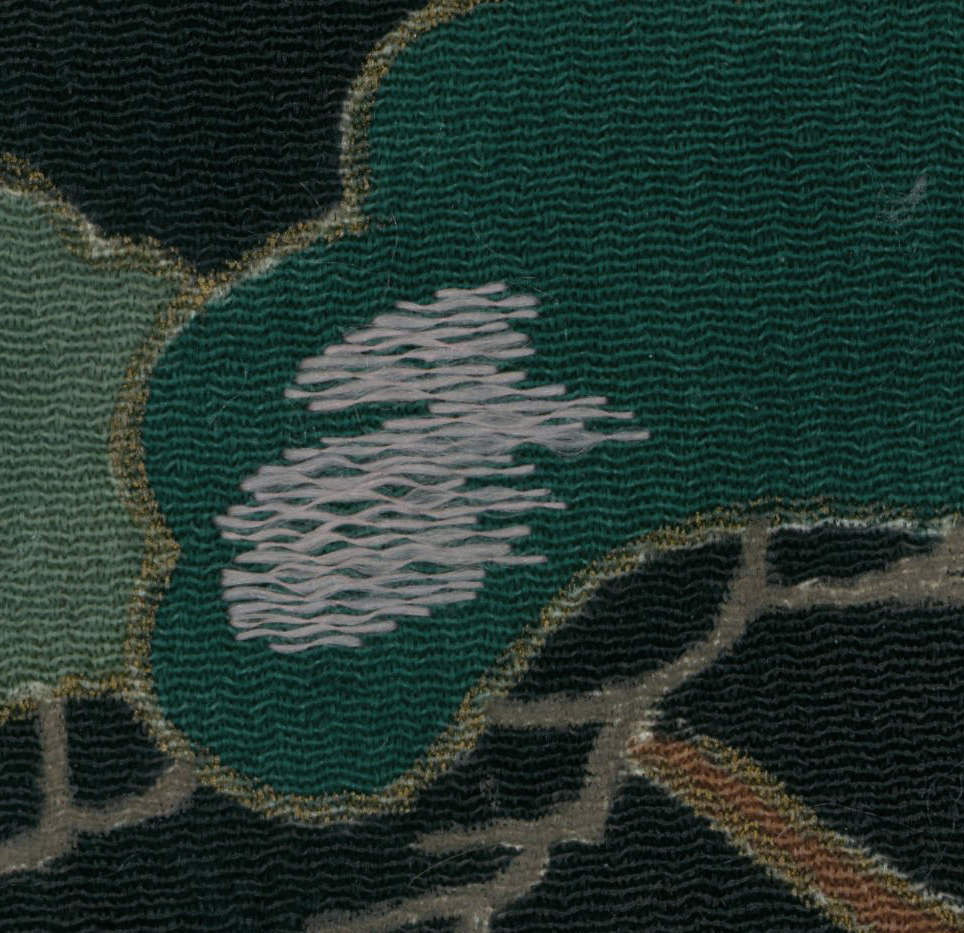 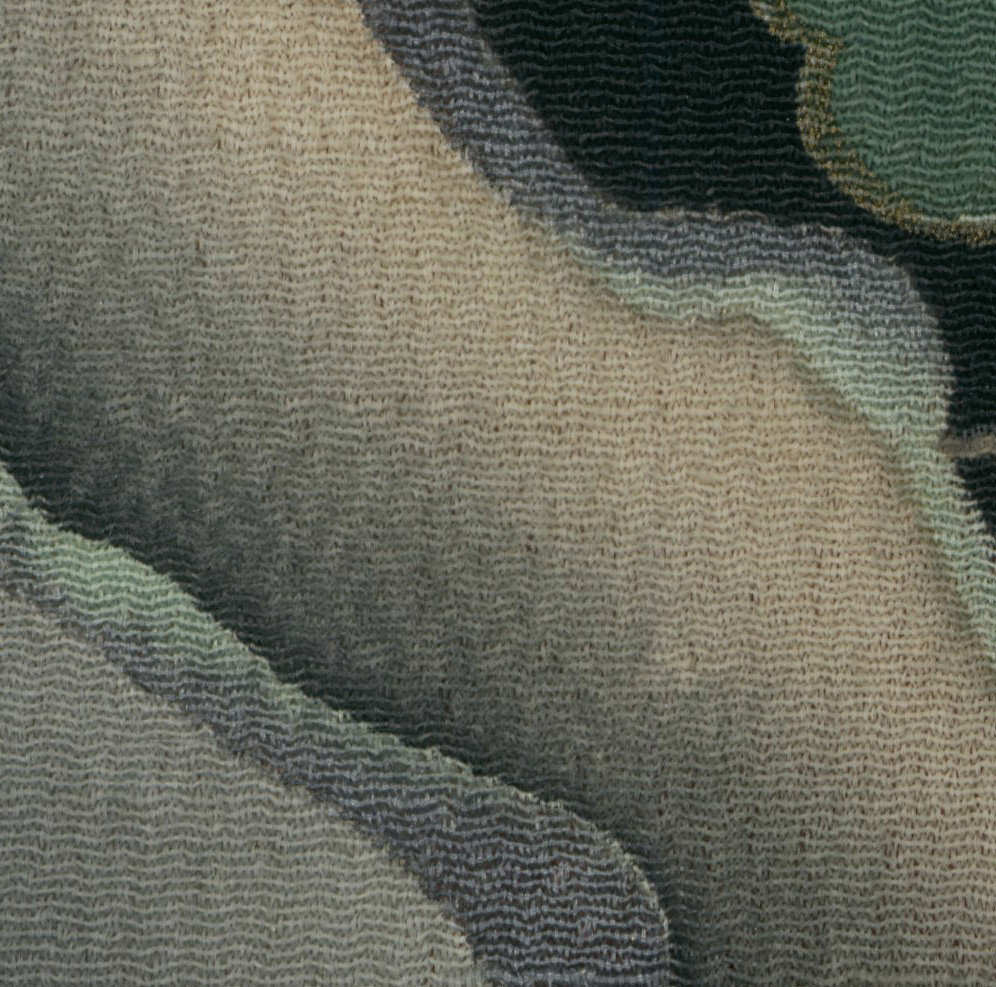 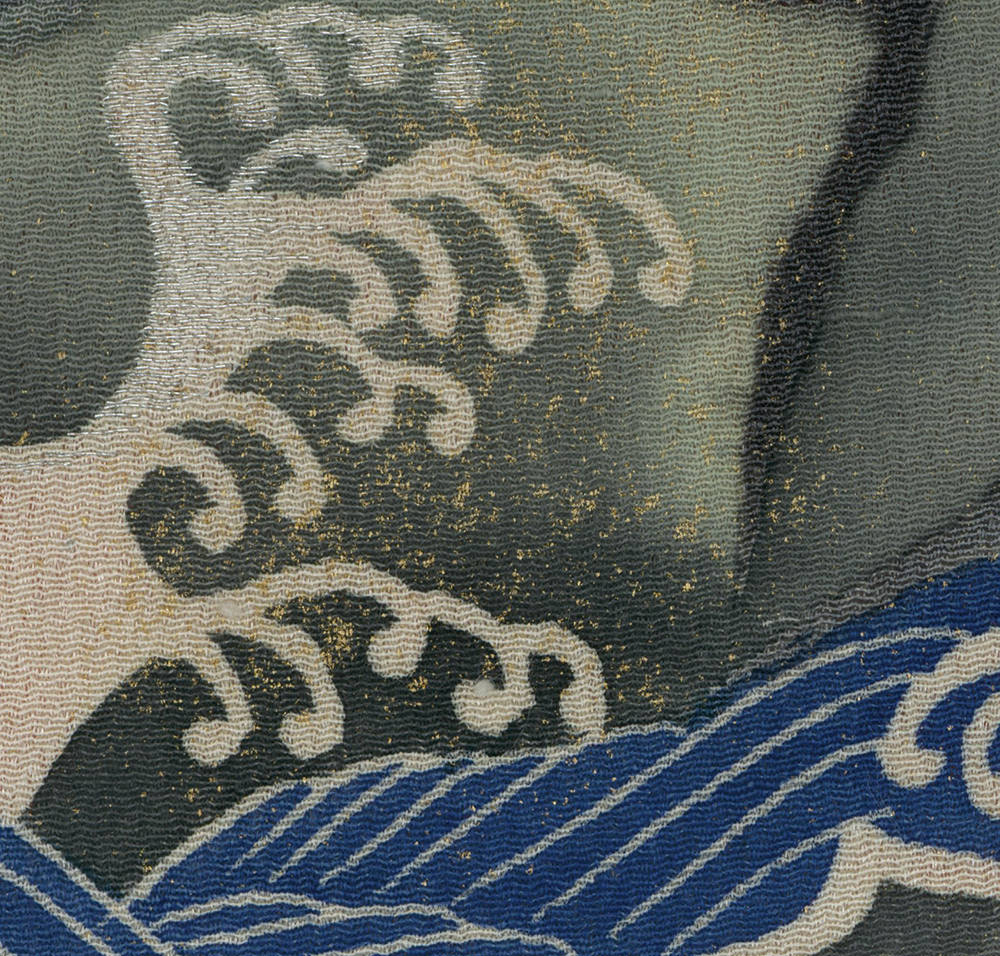 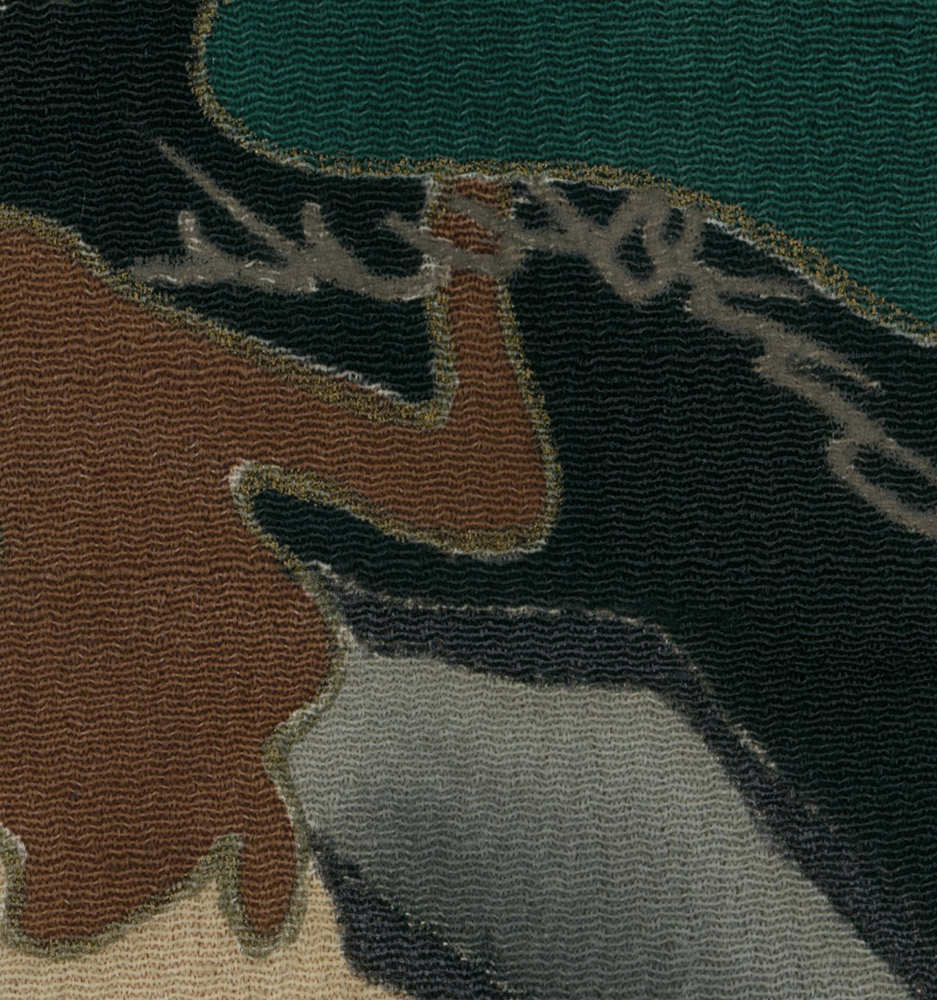 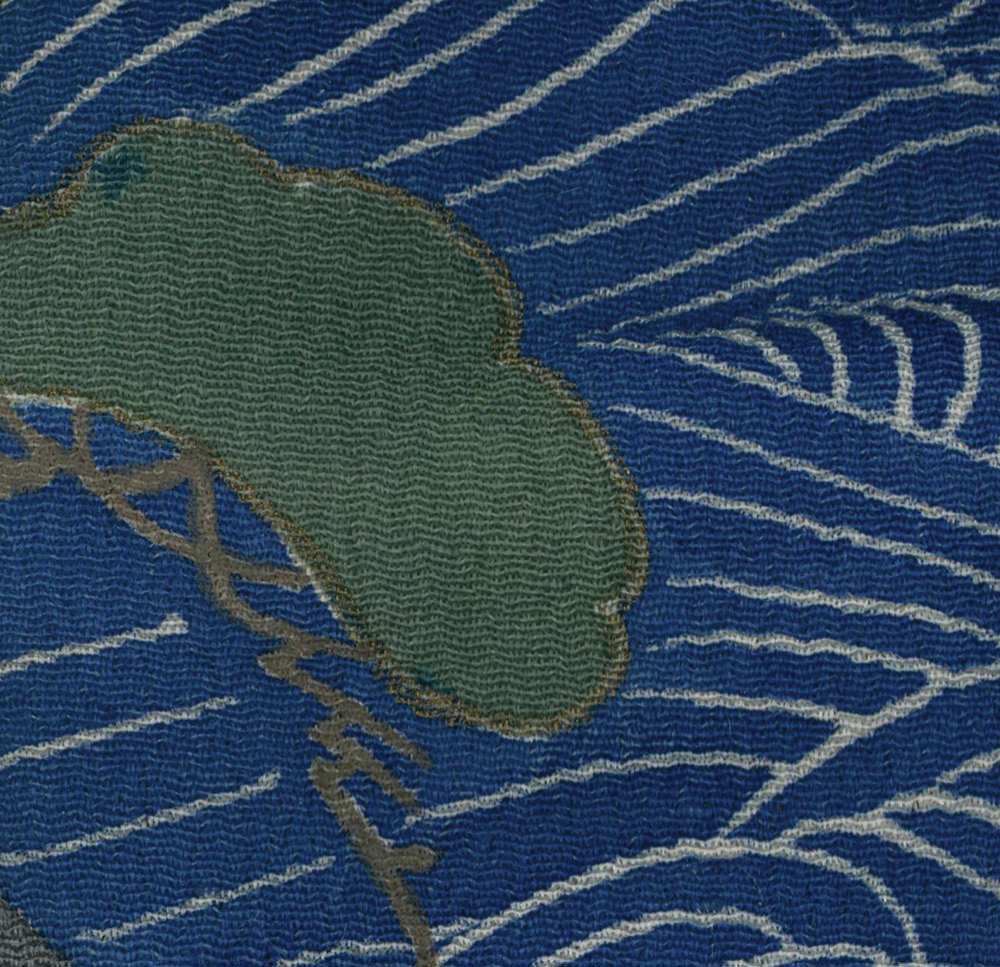 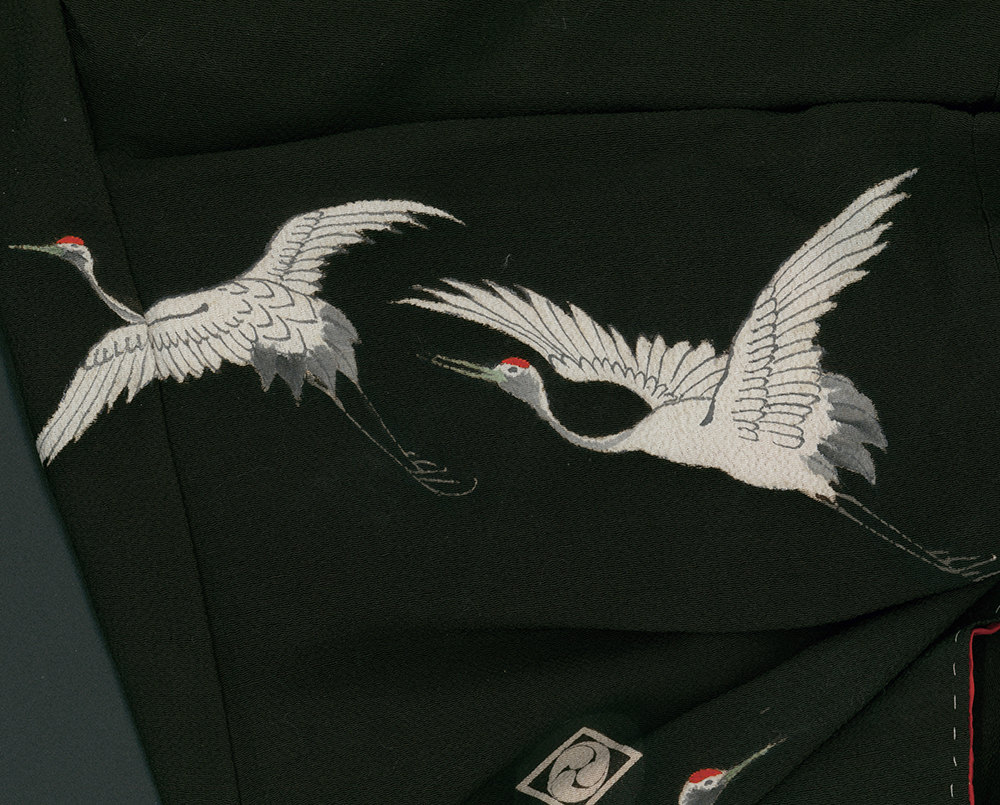 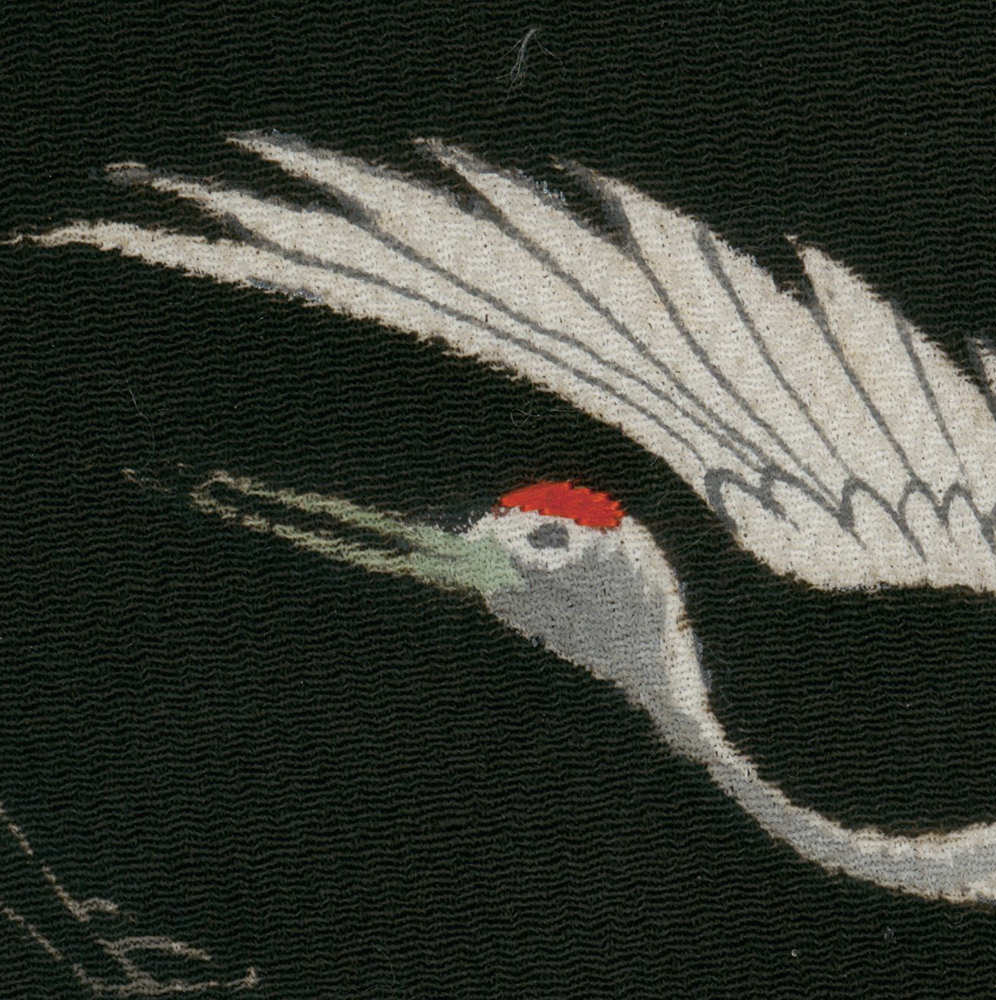 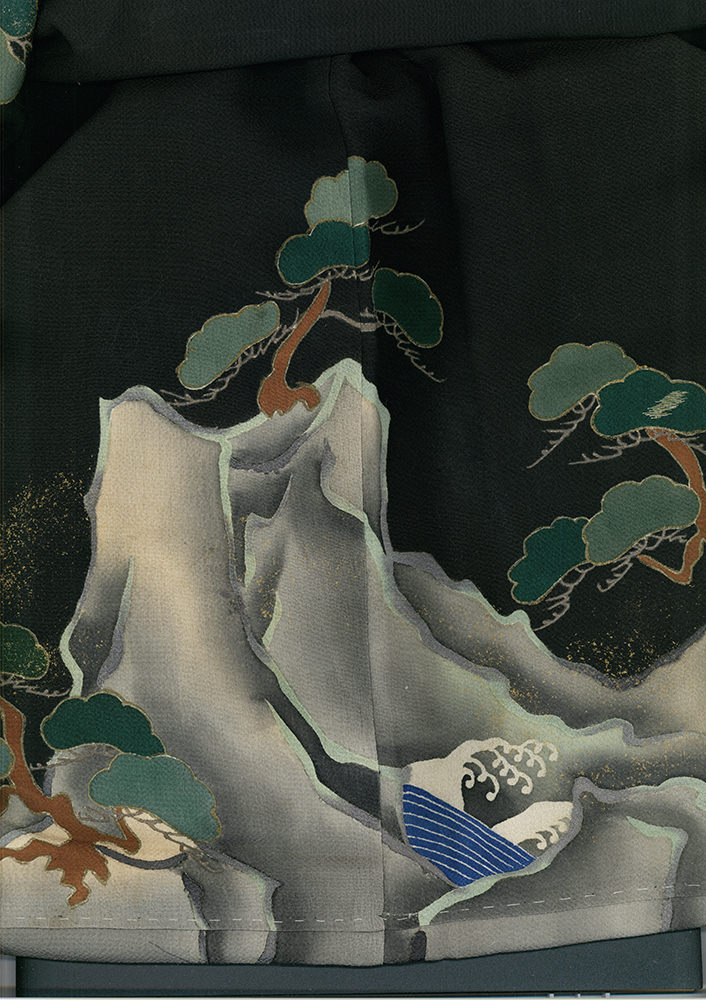 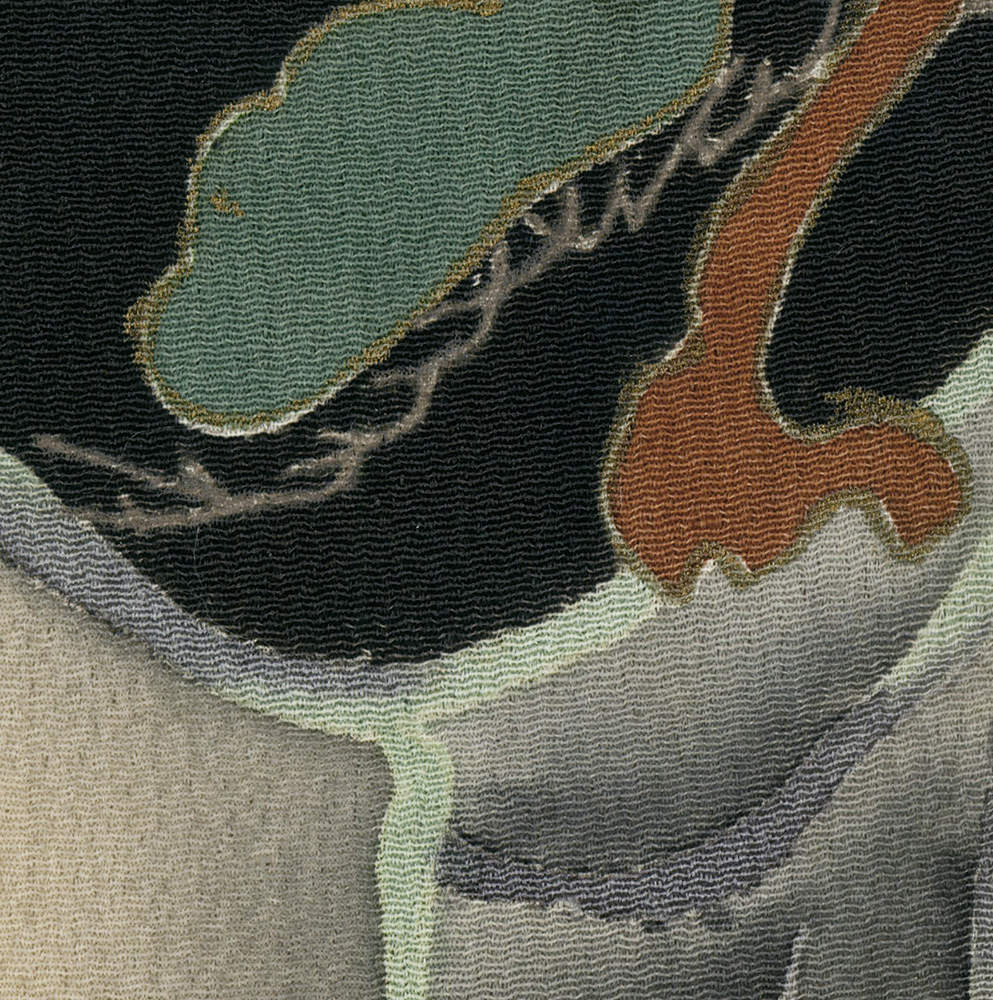 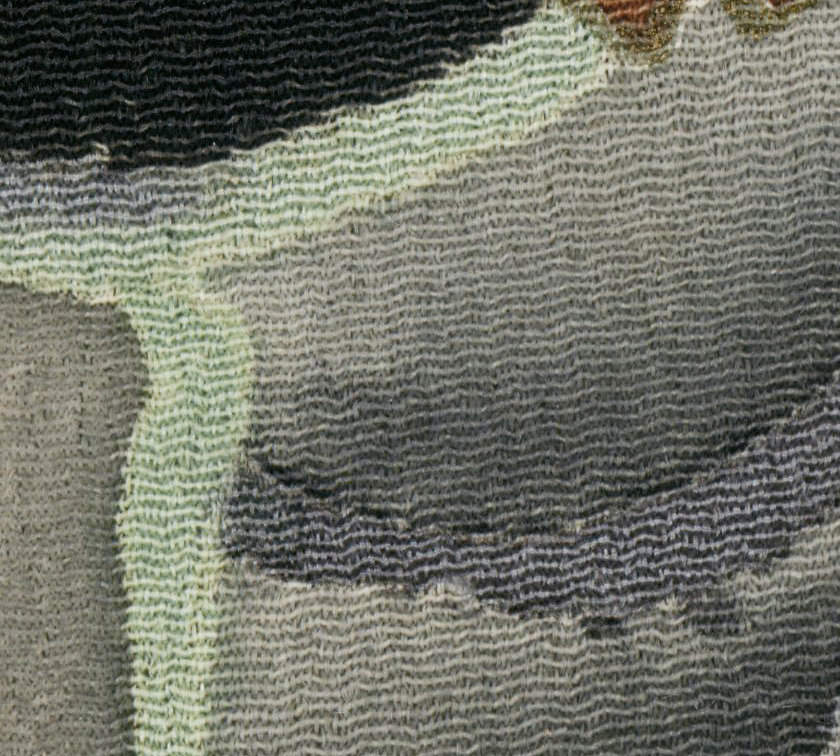 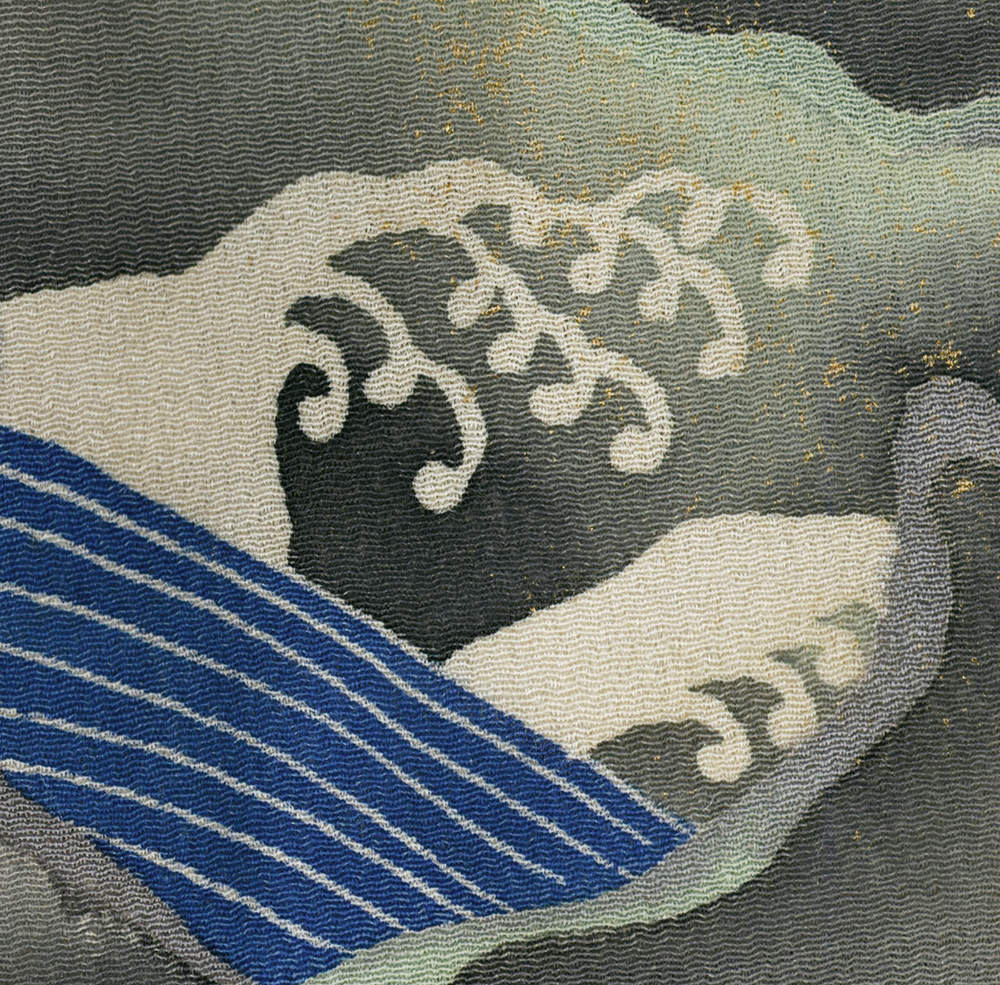 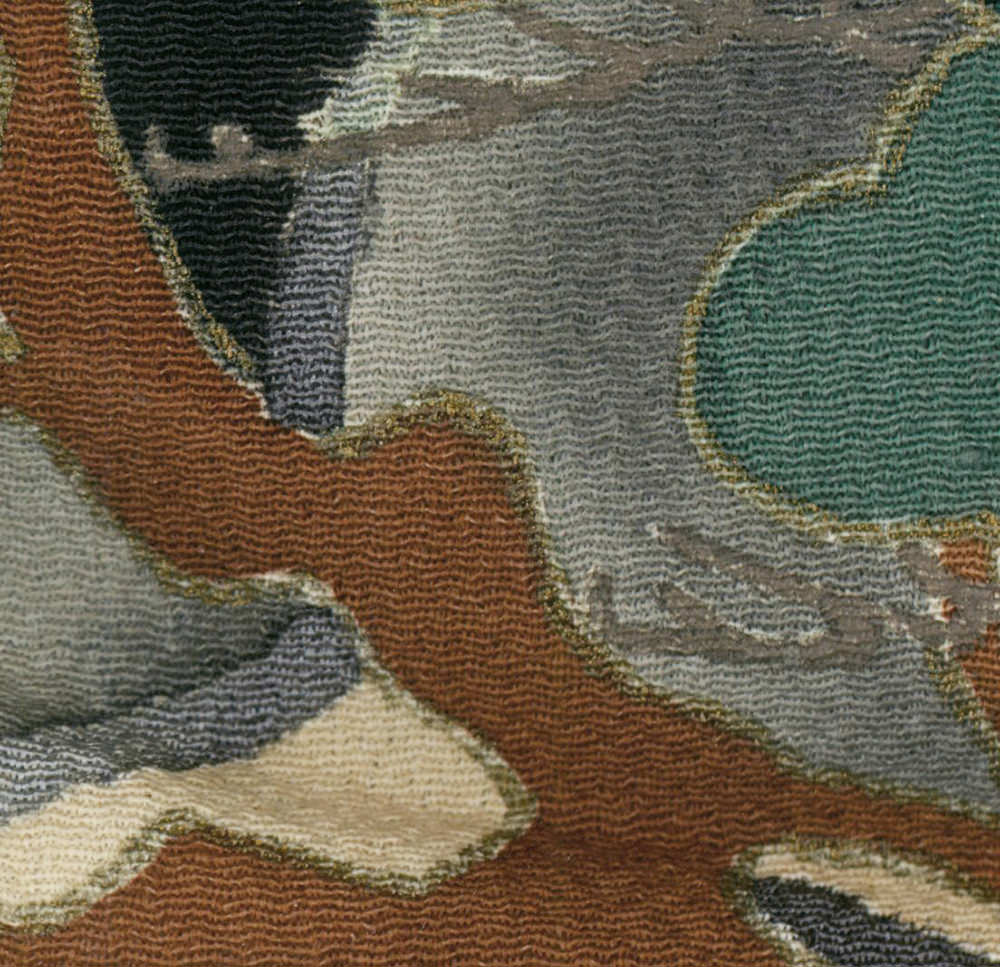 A remarkable chirimen silk furisode featuring a yuzen-painted Mount Horai scene, with ocean waves beating against shore rocks with pines, while cranes fly far overhead. Some embroidery highlighting. 49" across the sleeves x 62" height. The crane is one of the three major mystical animals, together with the dragon and the tortoise. Its chief symbolic meaning is long life. With their lifespan of some thirty years, cranes were thought to live not just decades but thousands of years, becoming virtually synonymous with immortality. At Japanese weddings it is a symbol of loyalty. Also associated with the qualities of honour and wisdom, cranes were believed to be intermediaries between heaven and earth, a messenger of the gods to humans, thus symbolizing the spiritual ability to enter a higher state of consciousness. Furthermore, the crane also represents a lasting soaring spirit, health, and happiness. Their white bodies stand for purity and their red heads denote vitality. In Japan, the pine tree is considered one of the most beautiful trees. Several pine trees in Japan are over 800 years old. Over time the climate and other natural causes, as well as pruning and trimming, form the picturesque pine tree. It is one of the most auspicious symbols in all Japan of fortune and nobility. The pine is considered sacred, a belief that may stem from ancient Shinto ideas of trees and other plants as representations of divine spirits. In Japan, entrances to houses are often decorated with pine branches to welcome the Gods of New Year; its needle-shaped leaves are believed to have the power to drive away unwanted demons and protecting good fortune. The long life of this tree and the fact that they are evergreen make them a symbol of strength, longevity and endurance. Considered to be the most aristocratic of all trees, the imperial gardens of Japan are full of pines. Befitting its status, the samurai as well as other nobles and aristocrats commissioned artists to paint pine trees as a means of wishing long life and auspiciousness. With regards to the five 'tomoe'-design family crests on this garment: during the period of feudal strife in Japan, the tomoe design came to be regarded as the personal symbol of Hachimon, god of war. The design also became the most popular decoration under the eaves and on the tiled rood edges of temples, apparently in the belief that the design represented a whirlpool and would serve the talismanic purpose of waterproofing the building. As a heraldic device, the tomoe was thus not merely and elegant design in its own right, but also possessed desirable religious and martial qualities.  All the artwork on this kimono represent a simplified version Mount Horai.  The Taoists believe that Mount Horai was a paradise located in the Eastern Sea (Sea of Japan).  Considering that the silk of this kimono is rather course and warm, and the Mount Horai subject matter,  suggests  this furisode was created for a winter wedding, perhaps by the bride's unmarried sister, or alternatively by the bride herself prior to the main wedding ceremony.