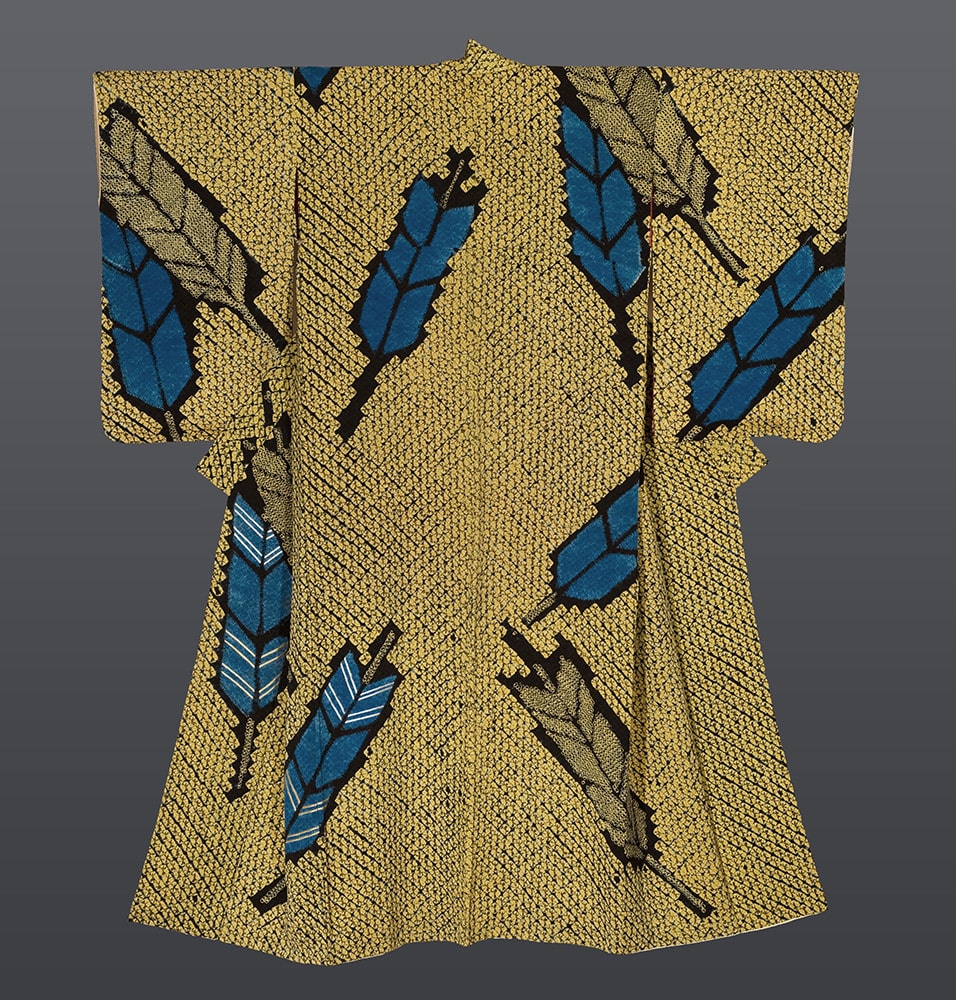 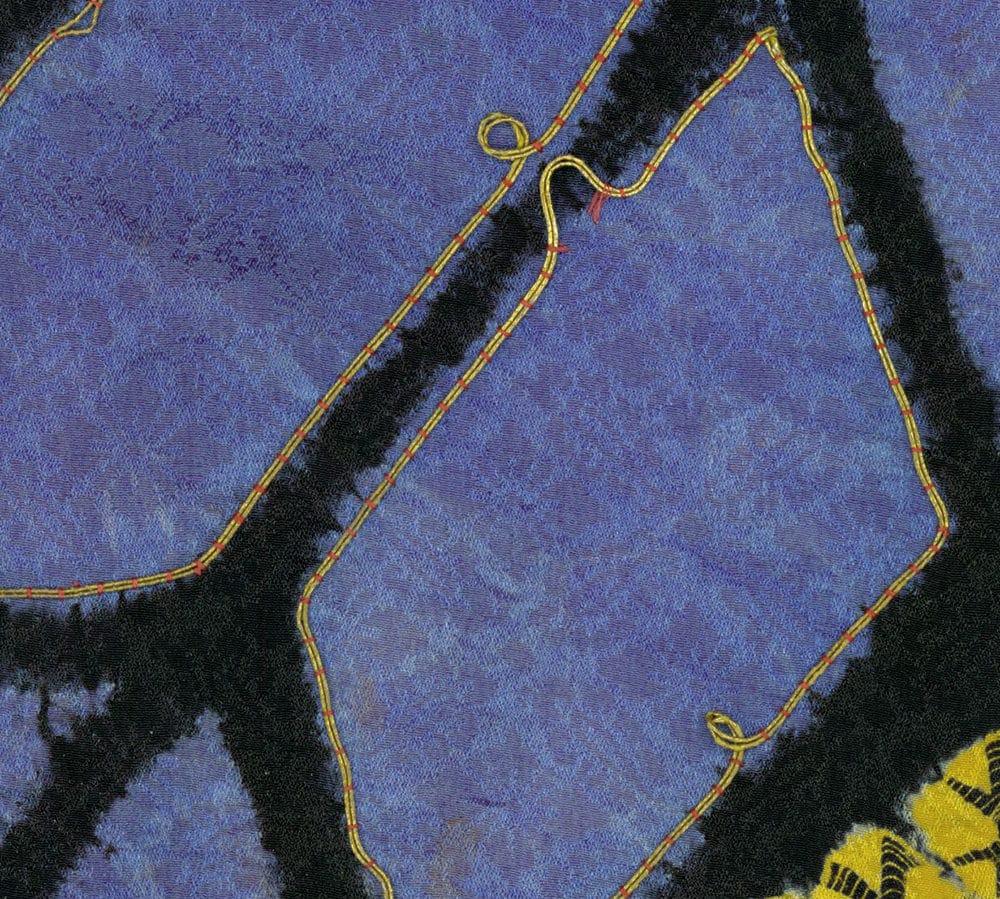 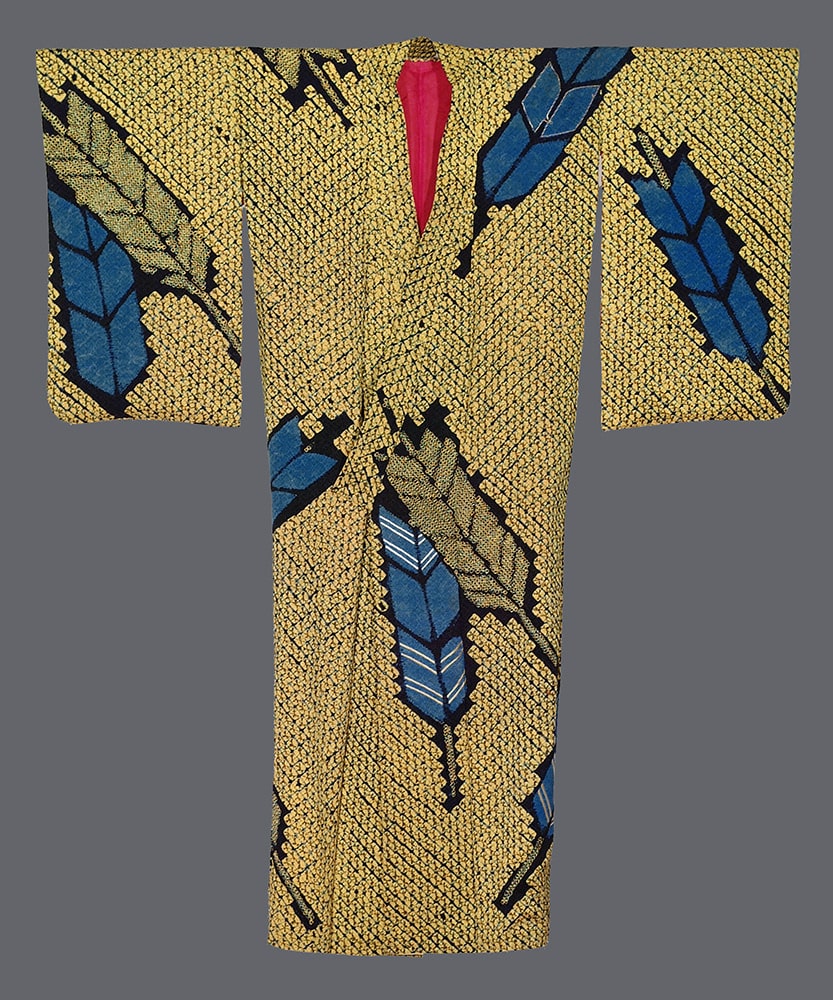 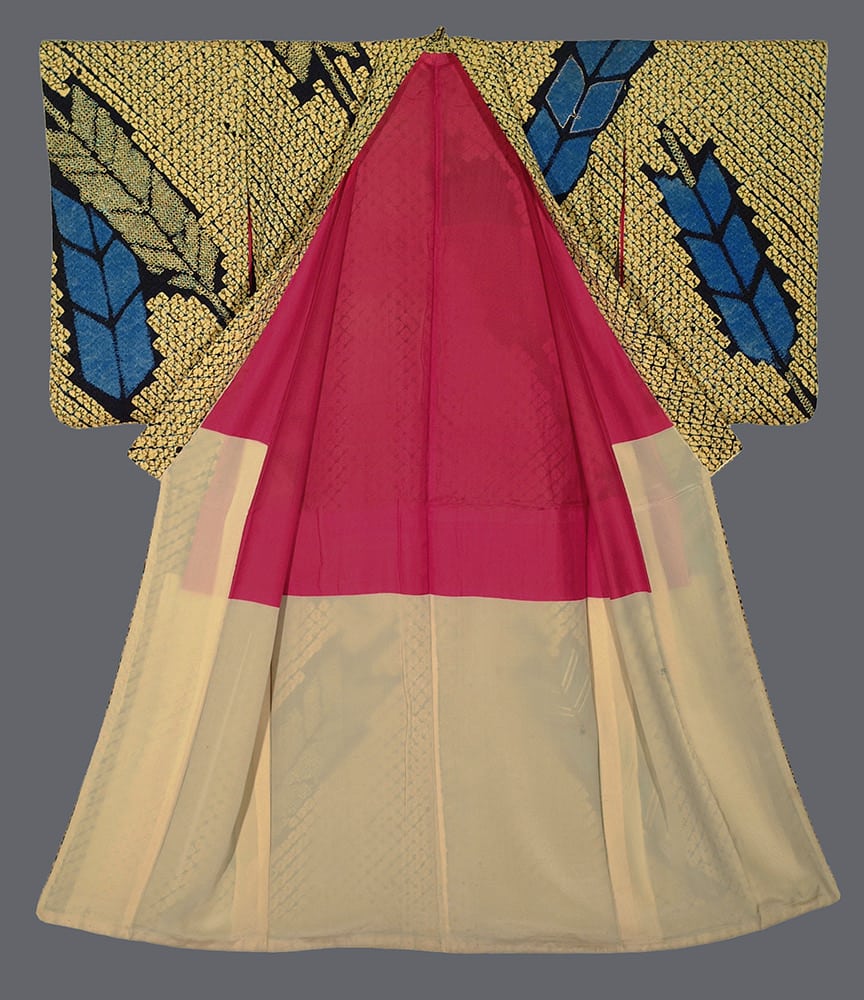 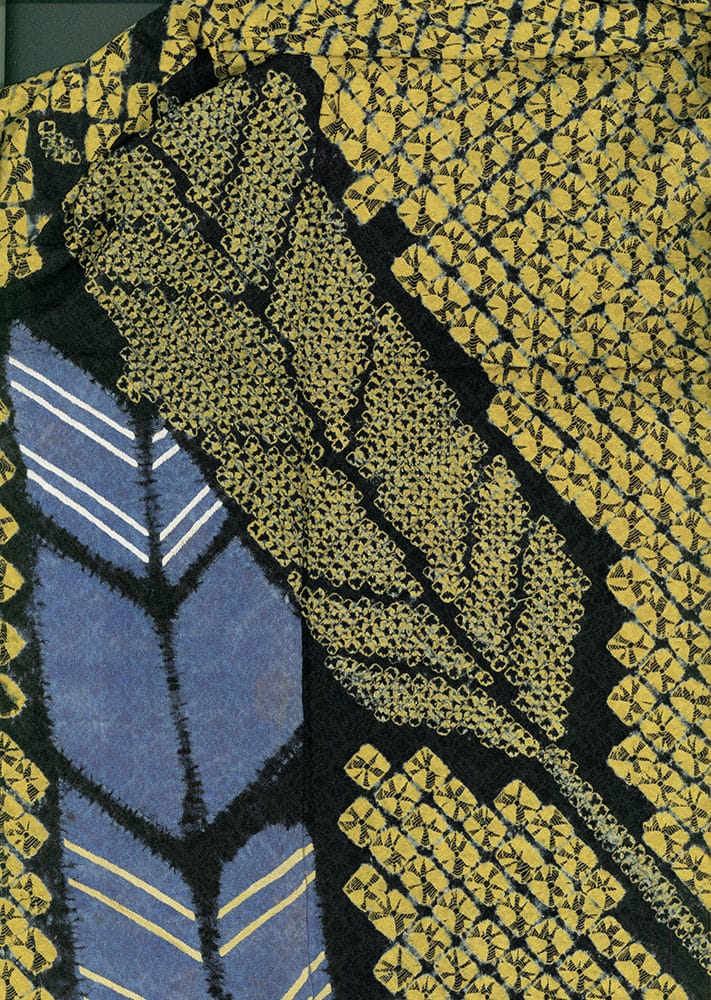 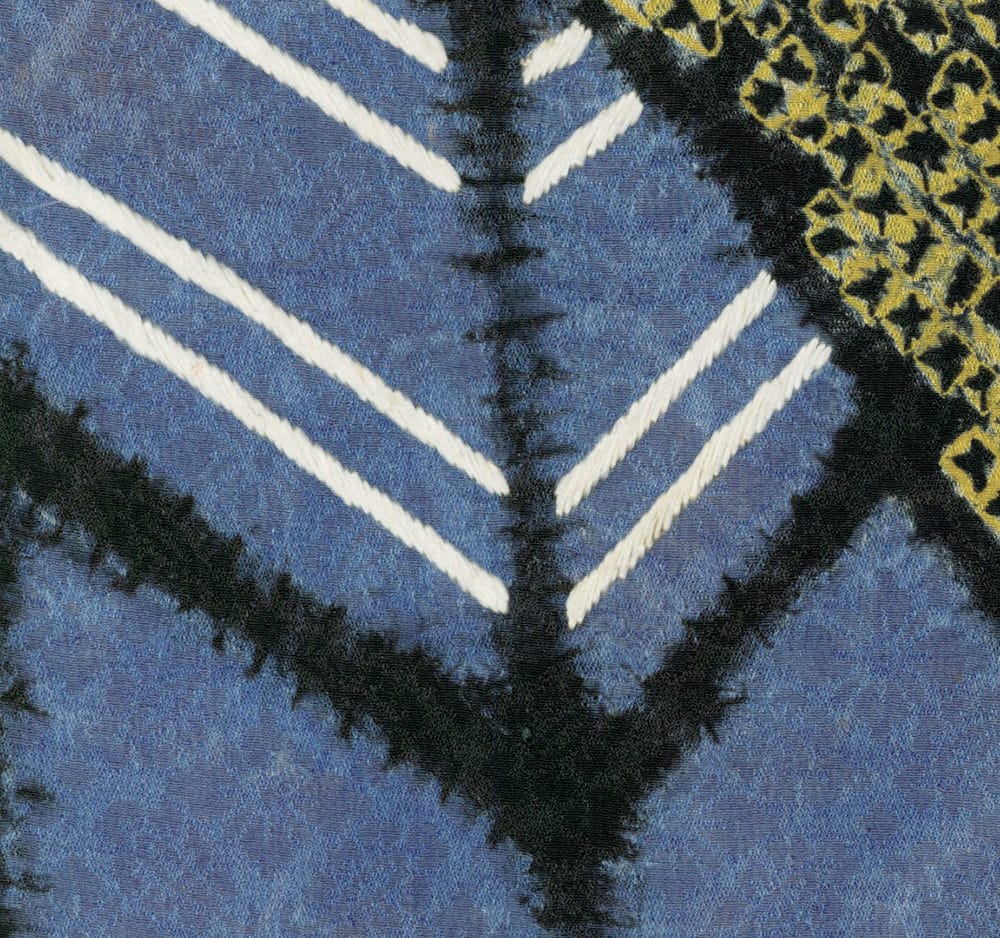 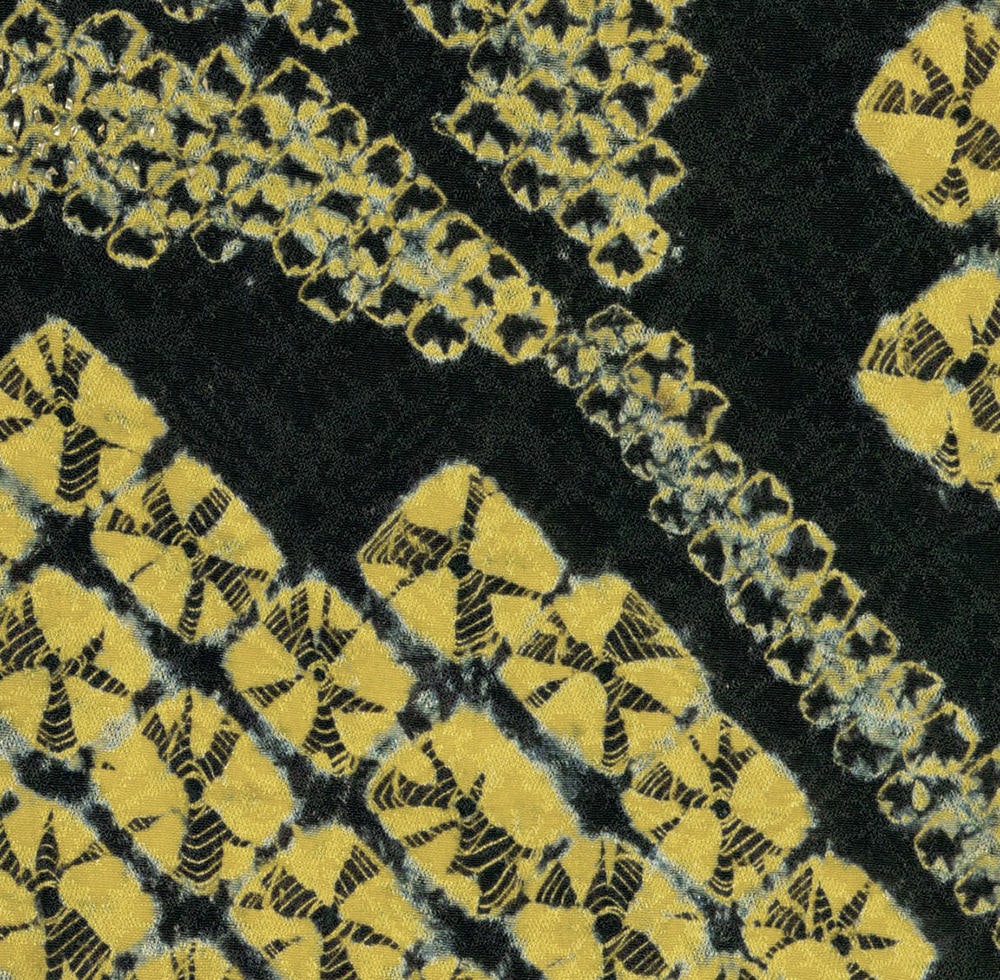 A silk shibori kimono featuring large 'yabane' (arrow-feather) motifs of shibori with silk and metallic thread embroidery highlights. 49" from sleeve-end to sleeve-end x 57" height. This kimono is patterned entirely in fine shibori (tie-die). The arrow feather (yabane) motif first became fashionable in Japan as early as the Heian era -- initially with martial connotations -- and during the Edo era it was often used on kimono for ladies in waiting. The motif was very popular on schoolgirl and teacher kasuri (ikat) kimonos of the mid to late Meiji period. During the Taisho and early Showa periods the yabane was a popular woman's kimono motif, created via shibori, stenciling, or yuzen-dyeing. The arrow-feather motifs were most often vertical, but sometimes created at an angle, as in this example. The Yabane pattern , like most geometric motifs, is all-season, however, it has an auspicious association with weddings -- like an arrow shot from a bow a bride does not return to her parents' house. This kimono would have been very expensive to create - the shibori work itself would have taken a few months to complete. The white silk embroidery on the two arrow-feather motifs situated on lower left of the kimono is very visible from a distance, and provides a tasteful change from the other plainer motifs. The motifs are randomly scattered throughout the kimono 'canvas', resulting in a casual relaxed atmosphere. The "speckled" appearance of the yellow background color is an accomplished effect: many thousands of tie-dye knots were once placed here to be able to achieve the slightly puckered yellow dots on black background speckled look.

Price:
$
12,000.00
US
Available: Inquire
GalleryOrderingContactAbout UsGallery StatementNewsGlossary
Copyright © 2023 Yorke Antique Textiles
Thank you! Your submission has been received!
Oops! Something went wrong while submitting the form.