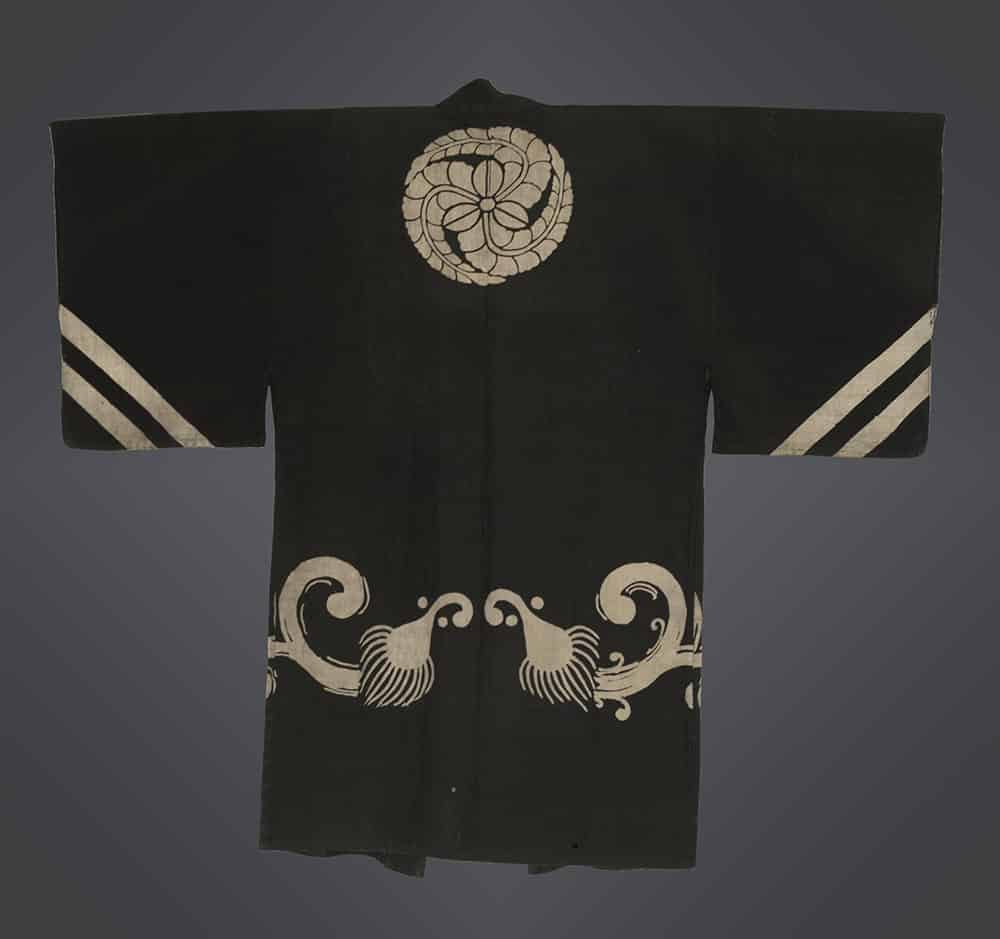 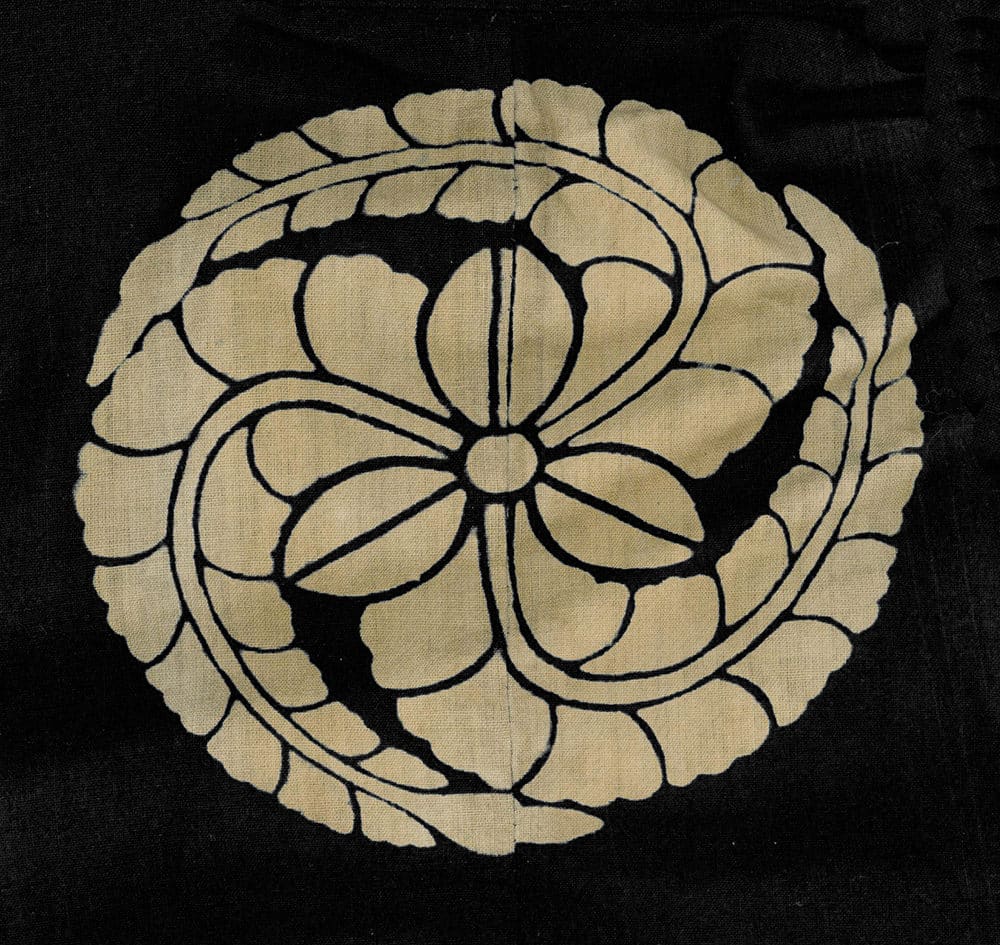 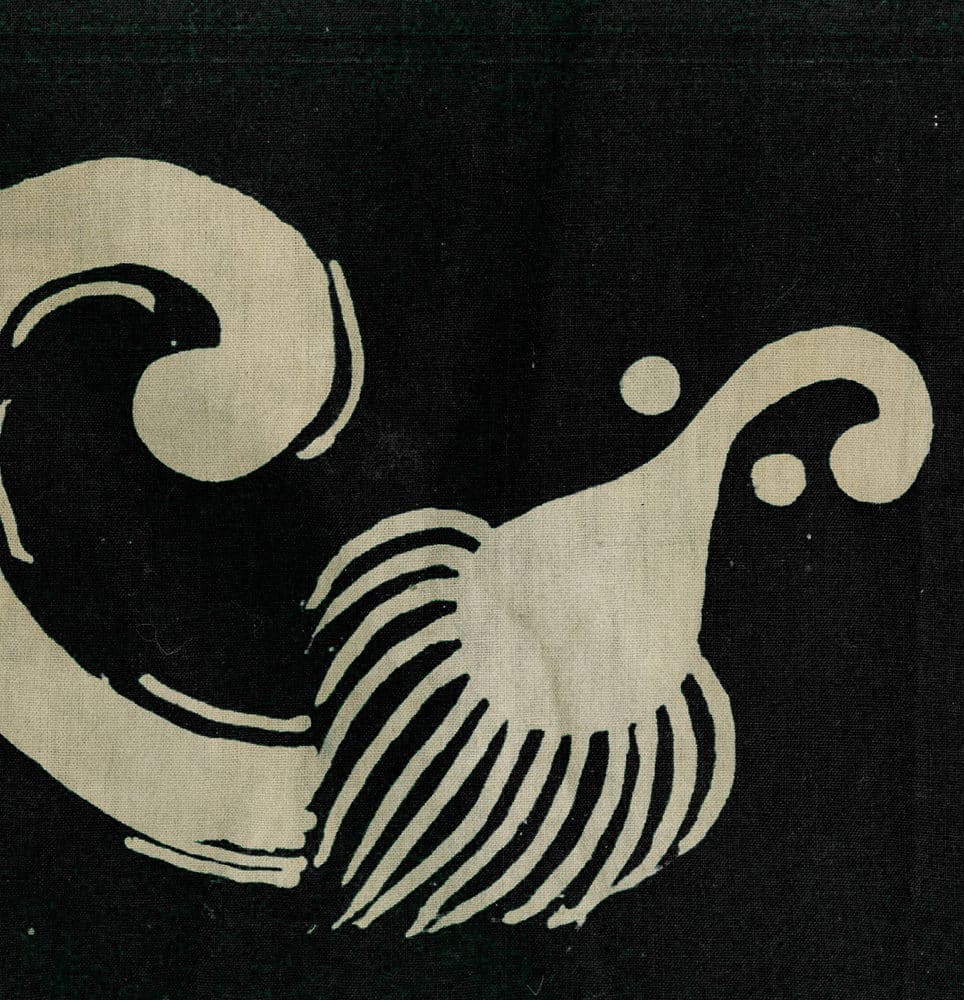 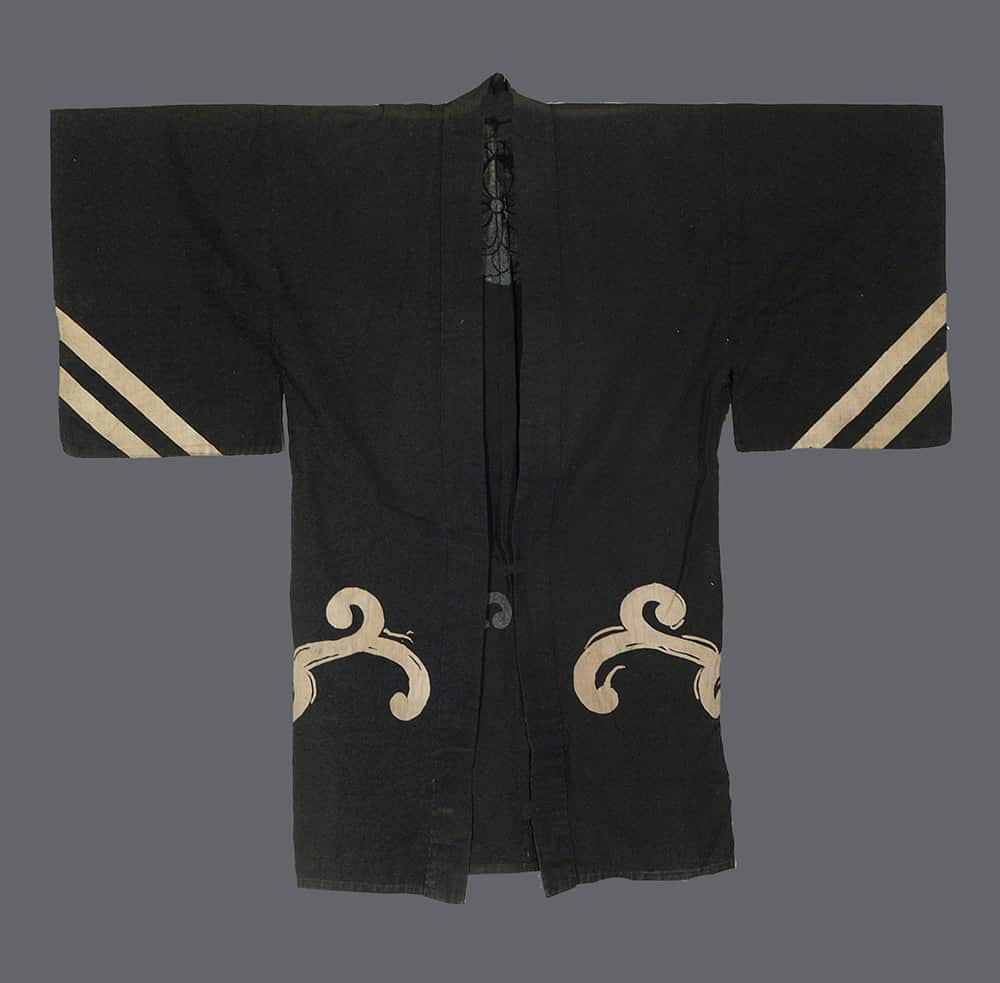 A rare cotton palanquin-bearer hanten, patterned with a large family crest, stripes  and rain-dragon motifs.  The motifs were created utilizing the tsutsugaki technique.  Very good condition (obviously seldom worn), with minor fraying where one sleeve is attached to the main garment, and two discreet small holes near the bottom rear.  42" from sleeve-end to sleeve-end x 48" height.  The family crest is the wisteria, a motif associated with Japanese aristocracy.  At the waist-level of this hanten, the two facing dragons are specifically those of the rain-dragon, 'amaryu',  auspicious motifs that connote wisdom and strength. The Western word 'palanquin' is a general term referring  to a covered litter carried on poles by two or more male bearers.  In Edo-period Japan, there were various types of palanquins, however, this jacket would have been associated with a 'norimono', an elite palanquin carrying a territorial lord or 'daimyo'.  This jacket was created by such a lord as a uniform displaying the lords' family crest.  As the population of Japan increased, less and less land was available as grazing for the upkeep of horses. With the availability of horses restricted to martial uses, human powered transport became more important and prevalent. Norimono were often used in Japan to transport the warrior class and nobility, most famously during the Tokugawa period when regional lords were required to spend a part of the year in Edo (Tokyo) with their families, resulting in yearly migrations of the rich and powerful to and from the capital along the central backbone road of Japan.  The British traveler Kaempfer witnessed during the mid-Edo period some of these  Daimyo (lord) processions: "the norimono', or palanquin, in which the lord sits, carried by six to eight uniformed men, who were often relieved by an equally large party of men. But there is a big difference between the palanquins of eminent people and those of the lower orders.  The former are magnificent and precious structures and are especially referred to as 'norimono', while the latter are inferior and called by the common name of 'kago'.. They [norimono] are carried by two, four, eight or more porters according to the persons rank, resting on the porters shoulders, but when the passenger is a territorial lord, the porters hold the palenquin up high with their hands.  These bearers (who all wear the same uniform with the crest of the lords family) are often relieved by others walking beside them". Following is an account by Hildreths of the same type of procession (from the late Edo): "The norimono-men, who have their sleeves tied with a string as near the shoulders as possible, so as to leave their arms naked, carry the pole of the norimono either upon their shoulders, or else upon the palms of their hands, holding it above their heads. Whilst they hold it up with one arm, they stretch out the other, putting the hand into a horizontal posture, whereby, and by their short, deliberate steps and stiff knees, they affect a ridiculous fear and circumspection".  Finally, an interesting observation by Felice Beato, an Italian-American photographer who visited Japan during the very late Edo (early 1860's): "The bearers of the Norimonos of Daimio's [Daimyo's]are selected for their symmetry of shape and muscular development, they are also chosen of uniform height, and are trained with as much care as are the favorite thoro'breds of a European State Carriage".