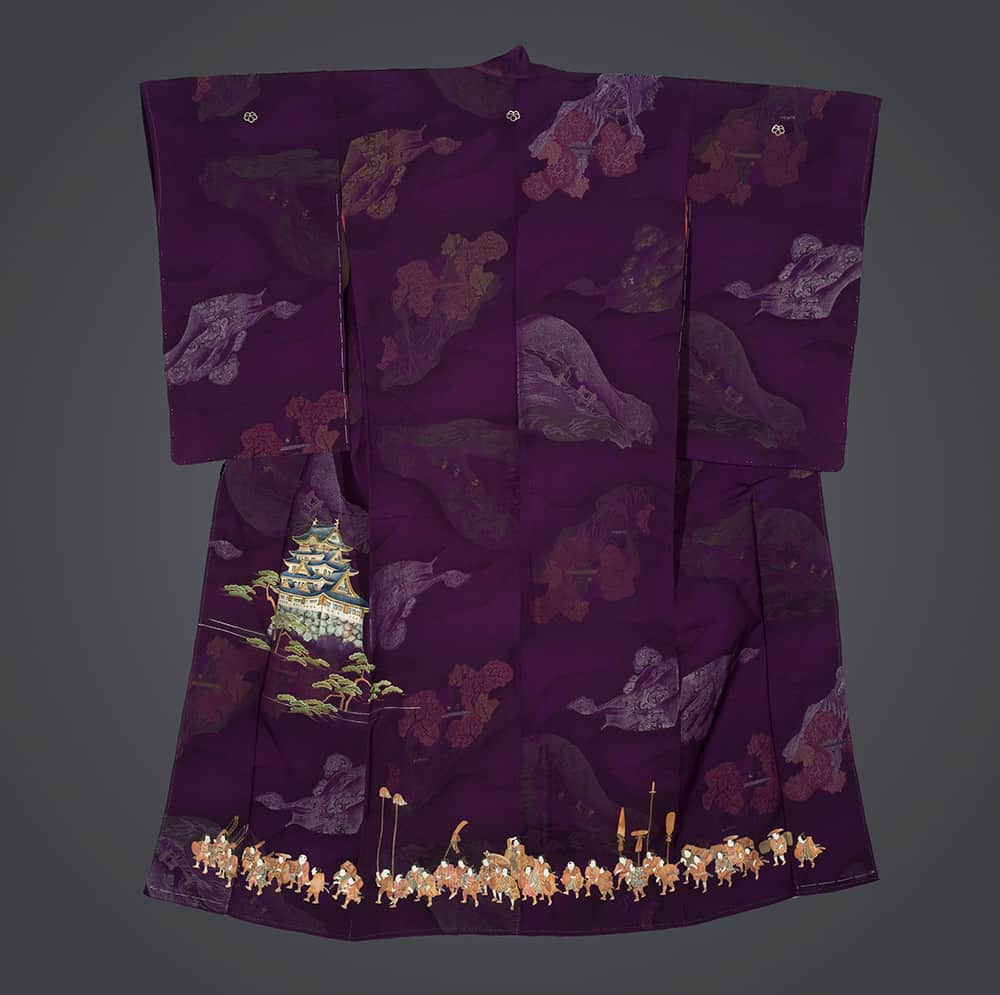 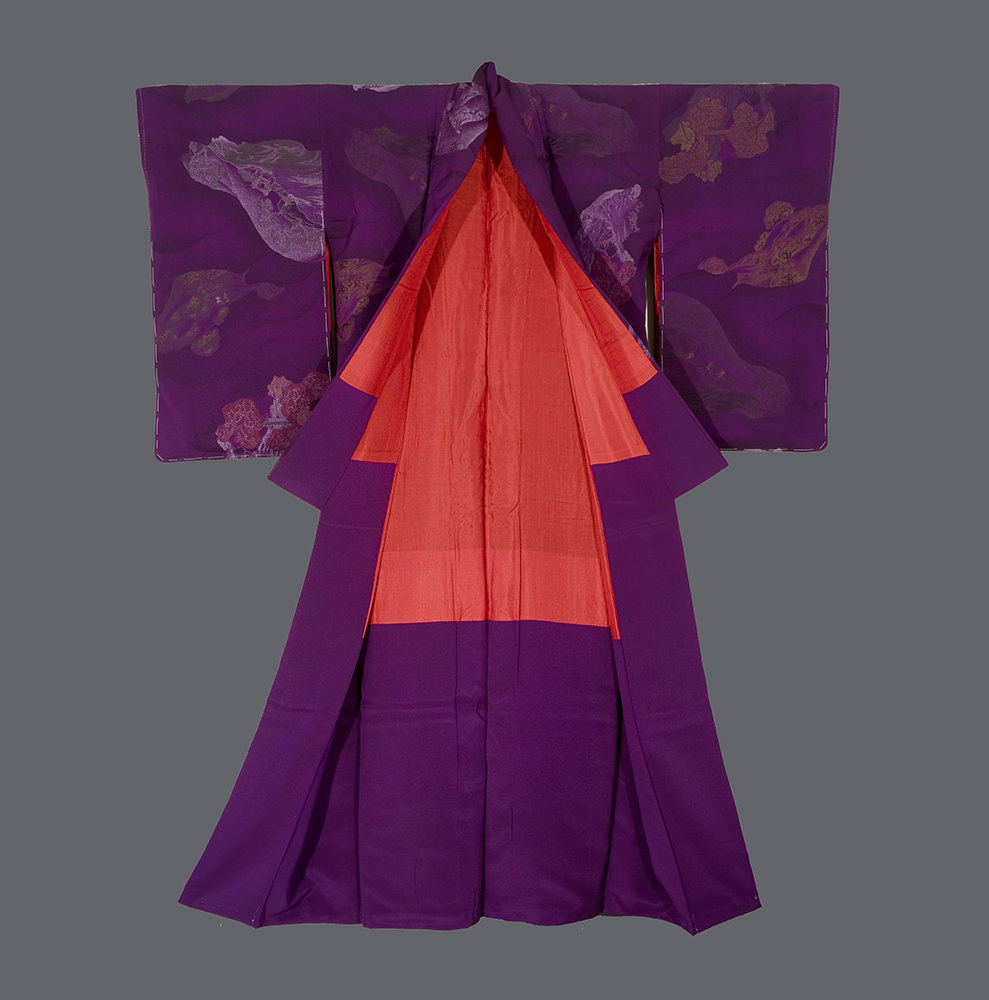 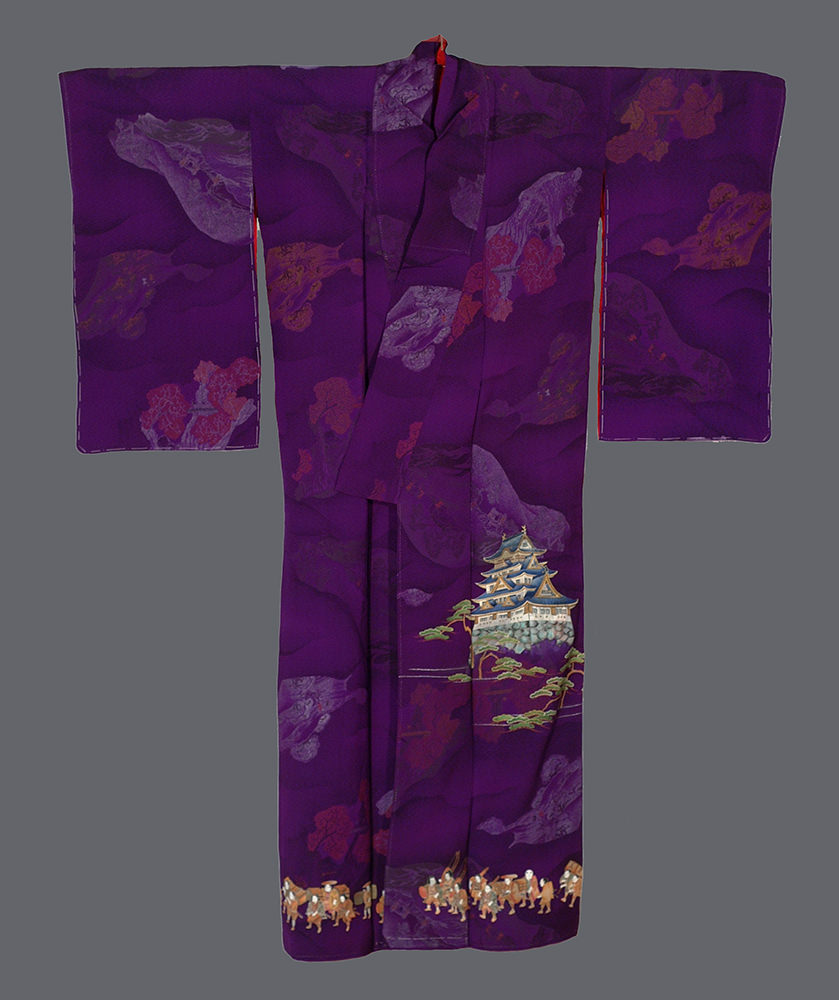 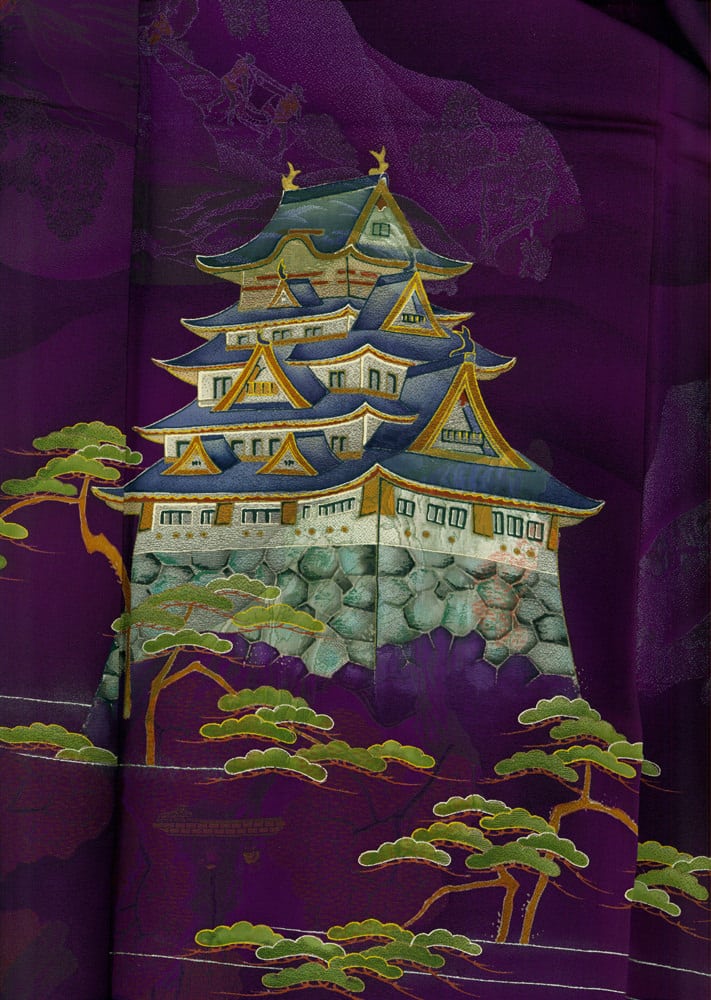 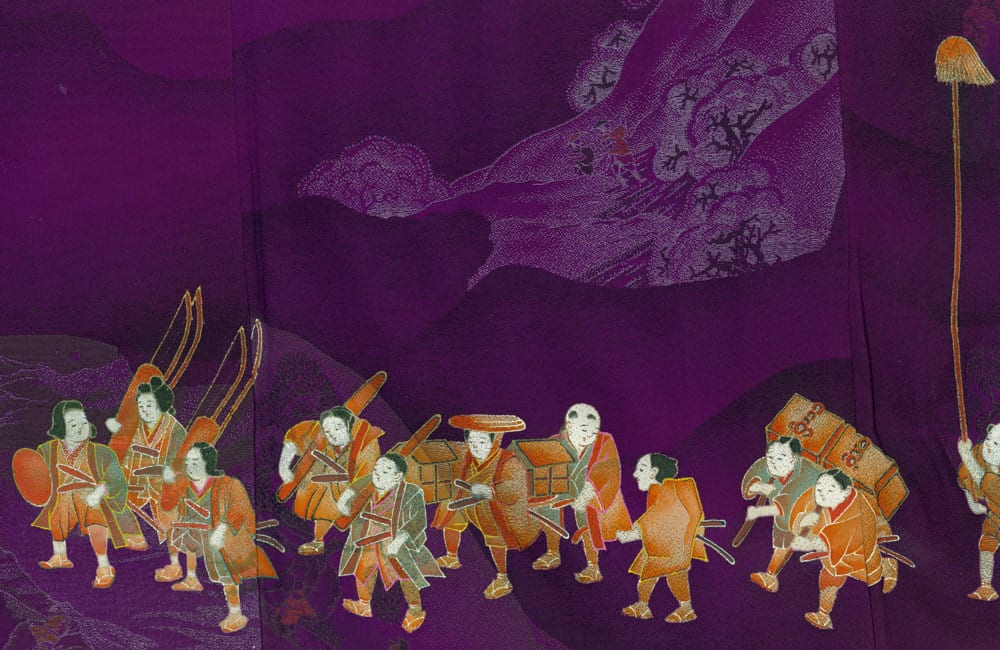 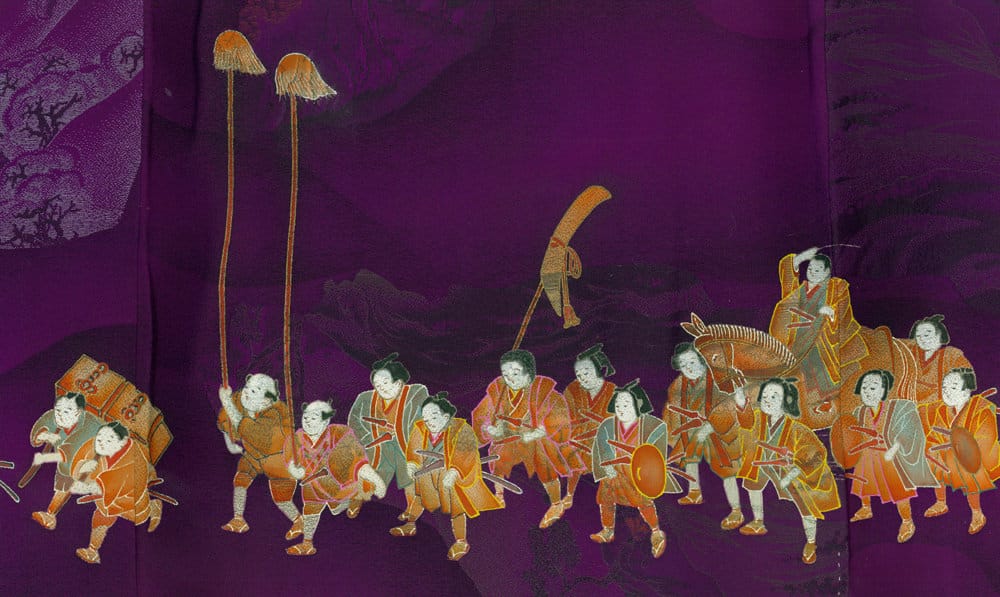 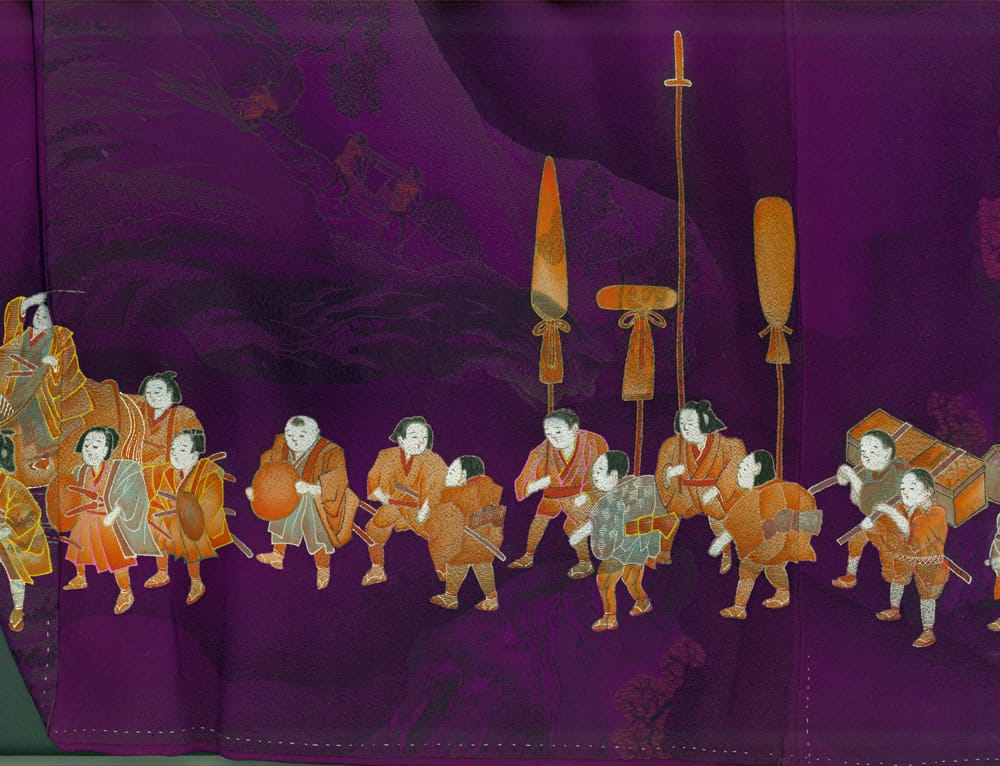 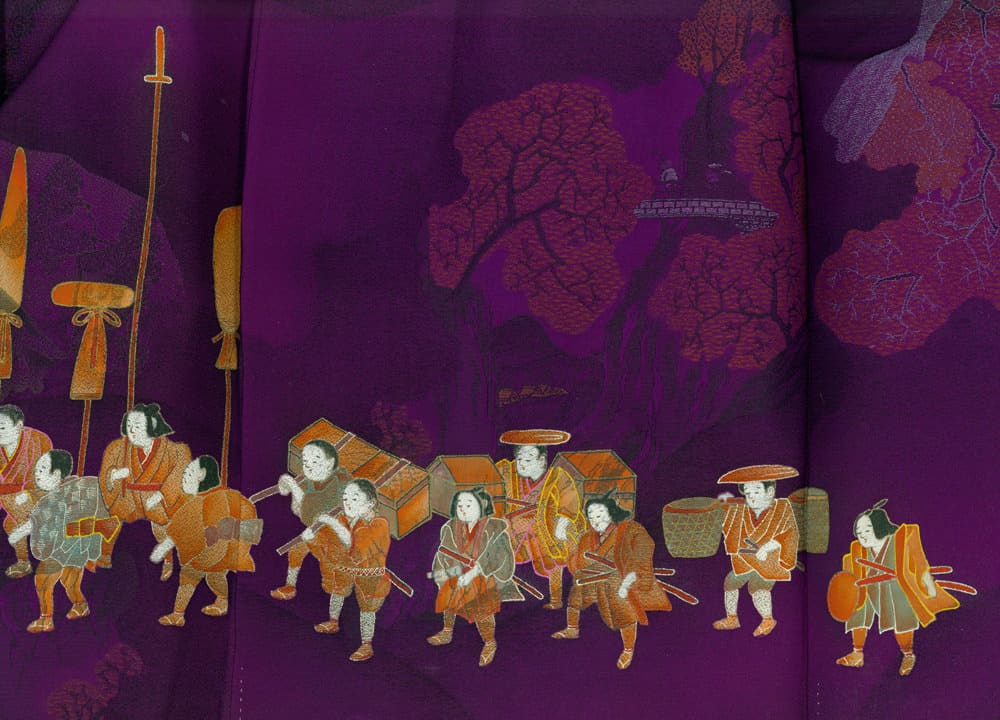 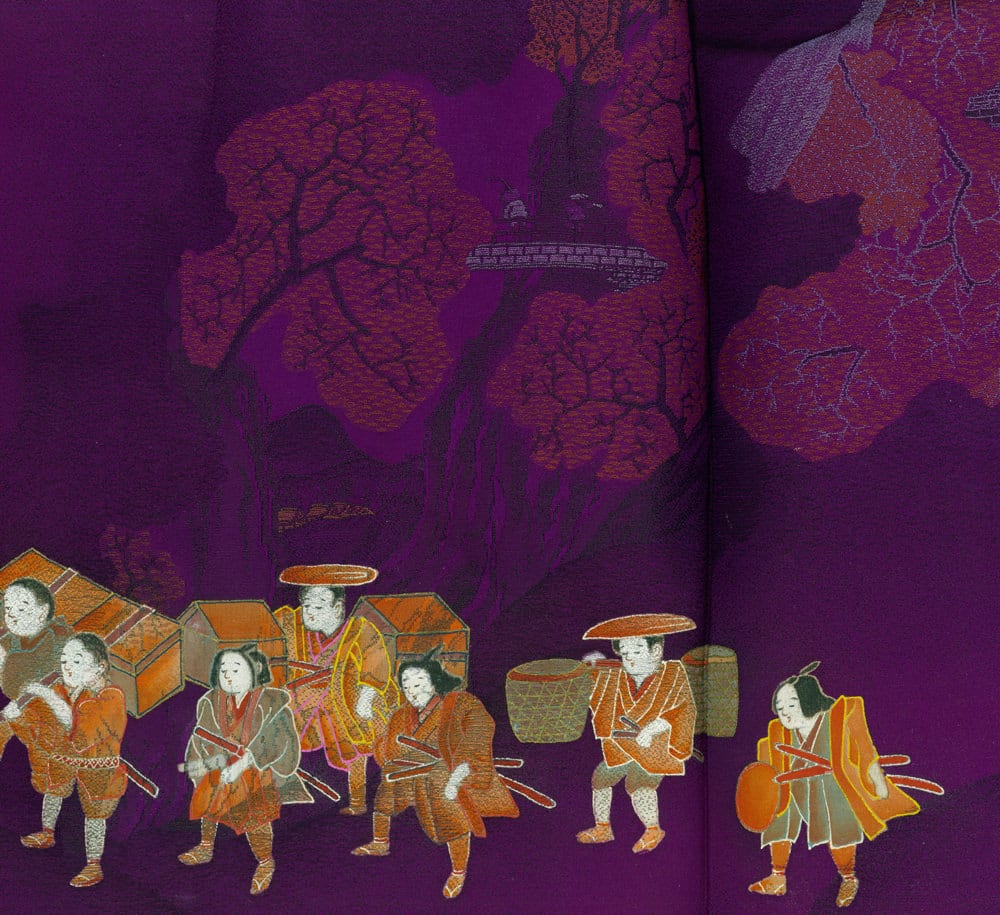 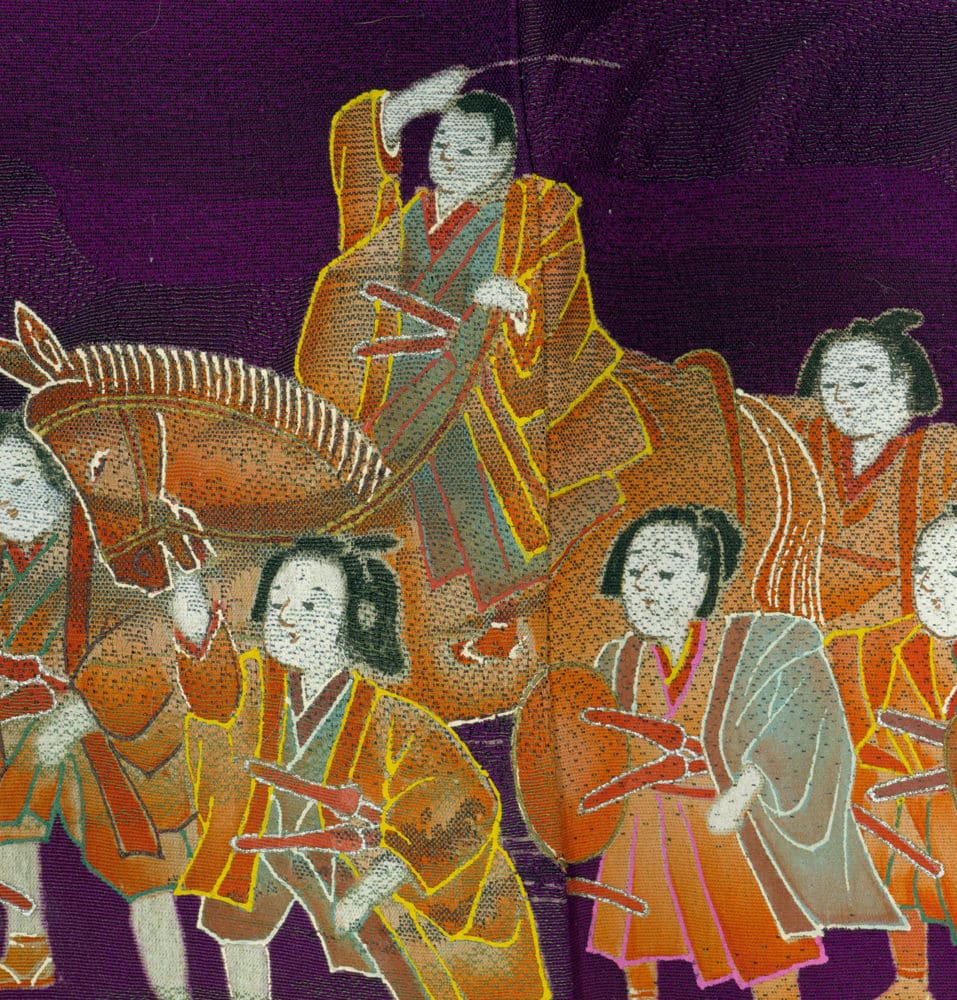 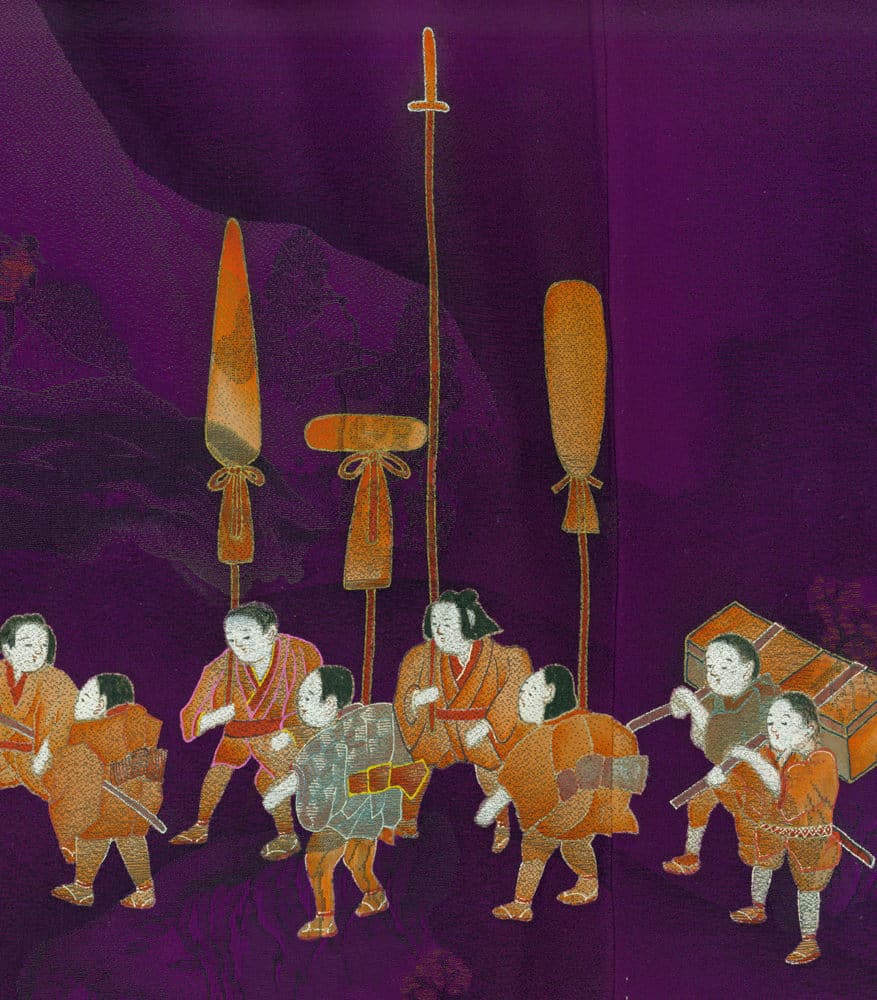 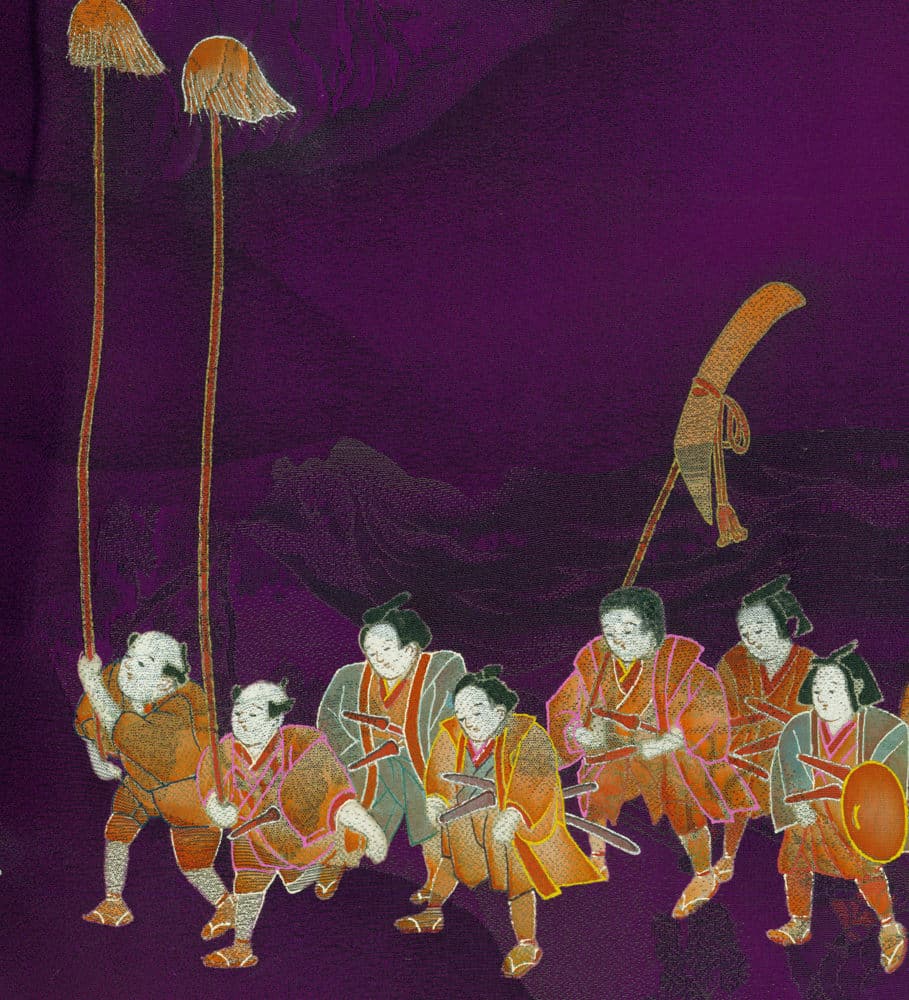 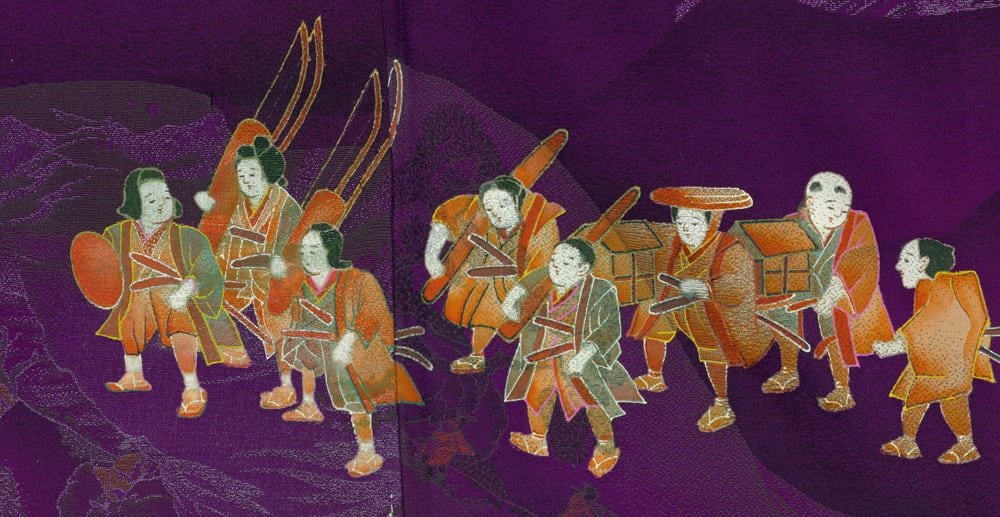 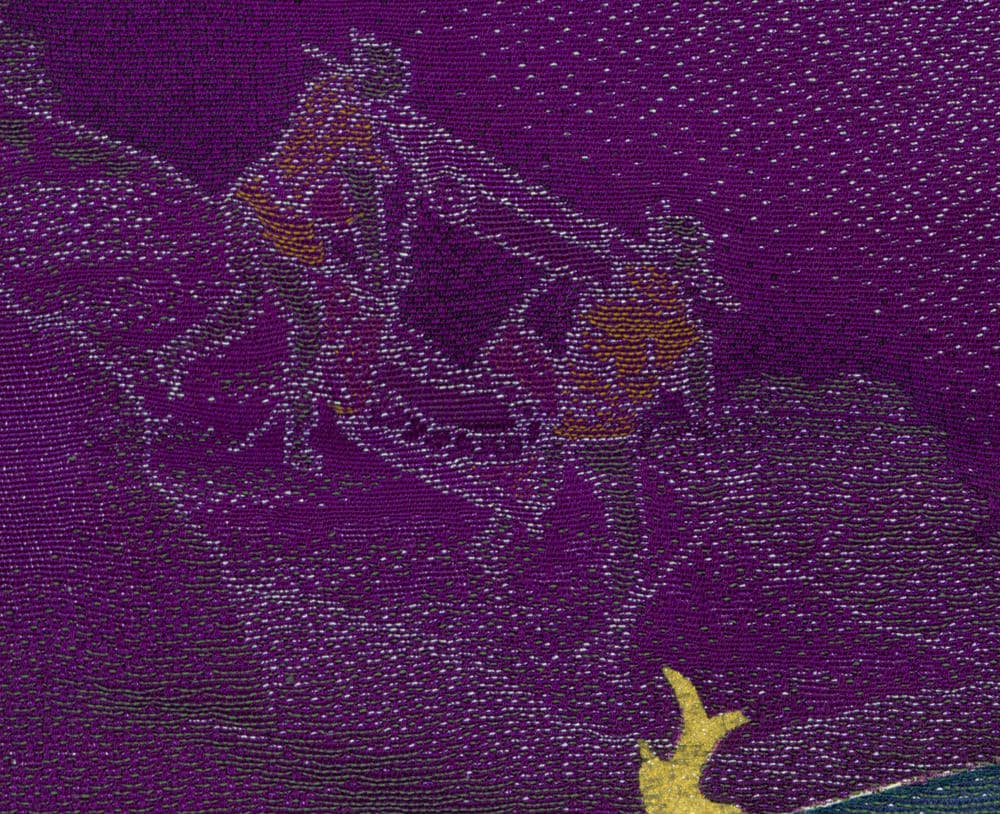 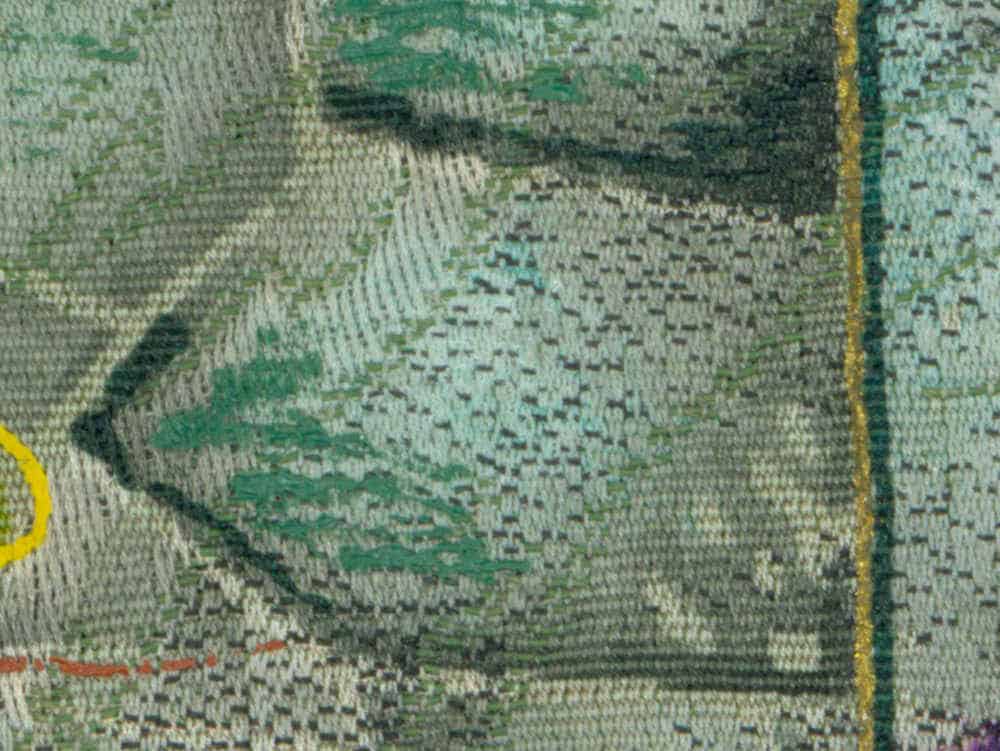 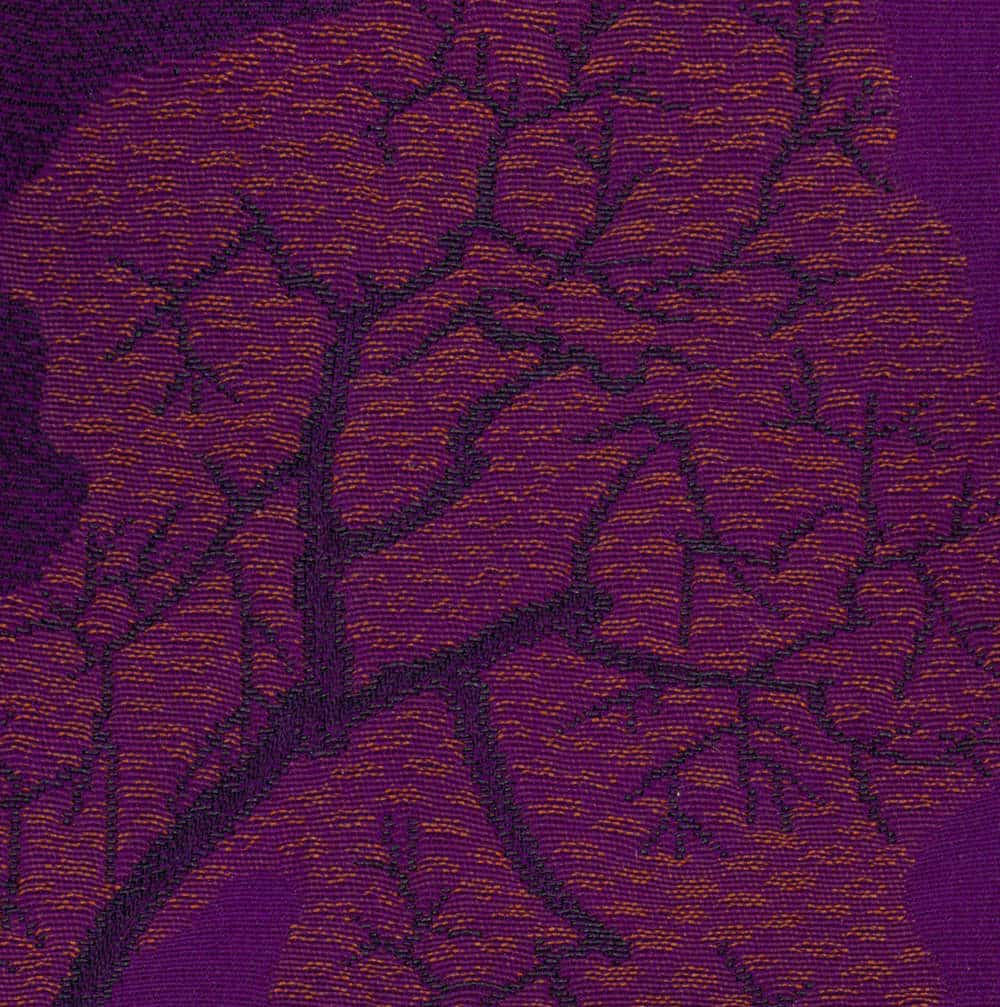 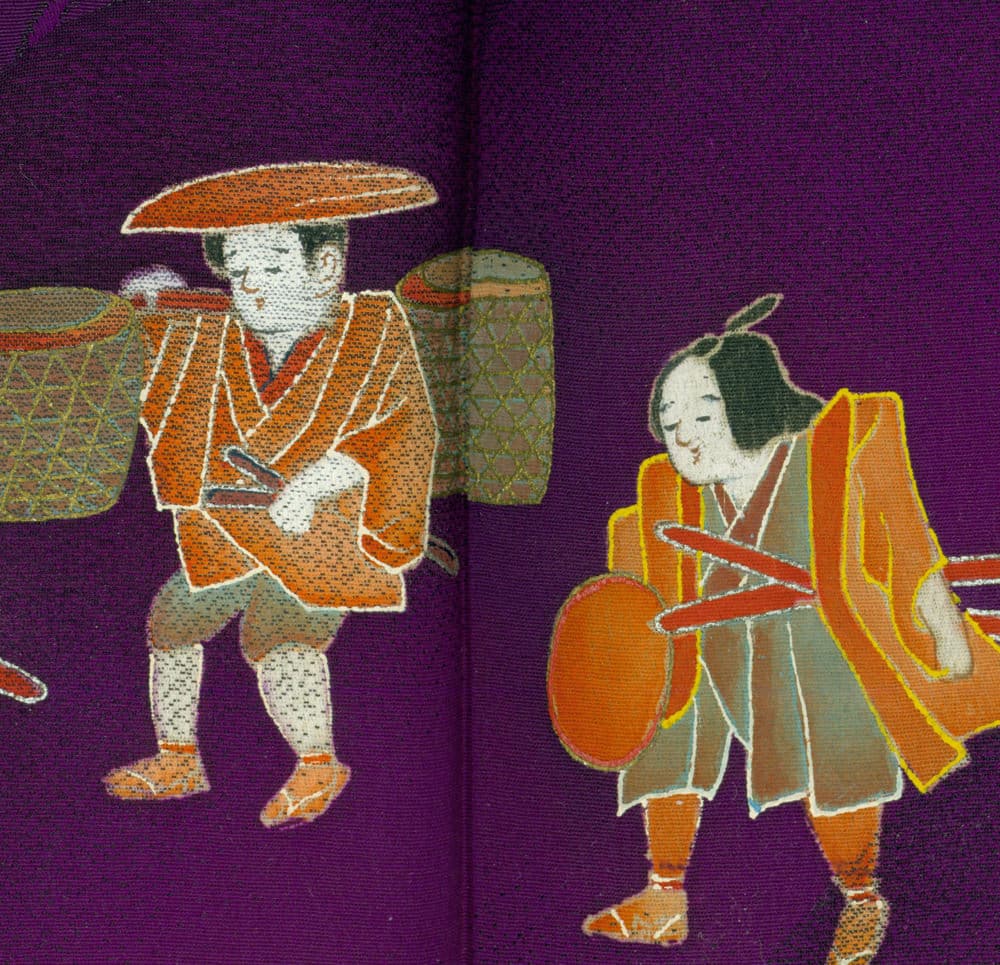 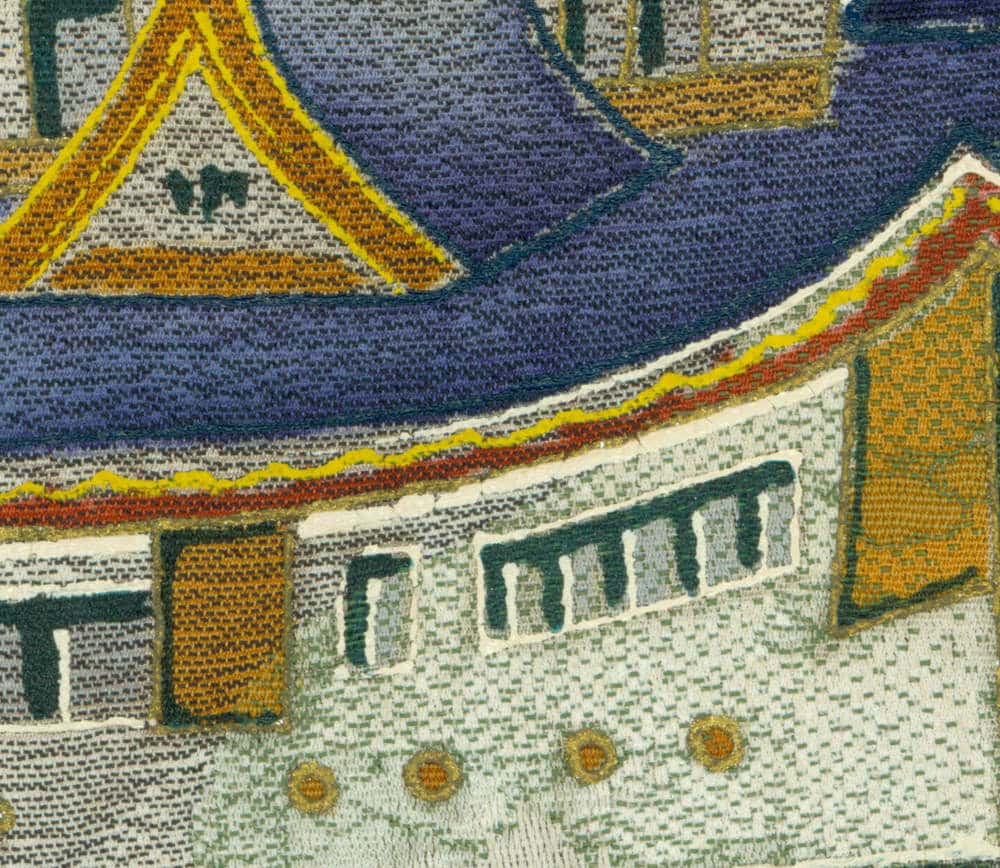 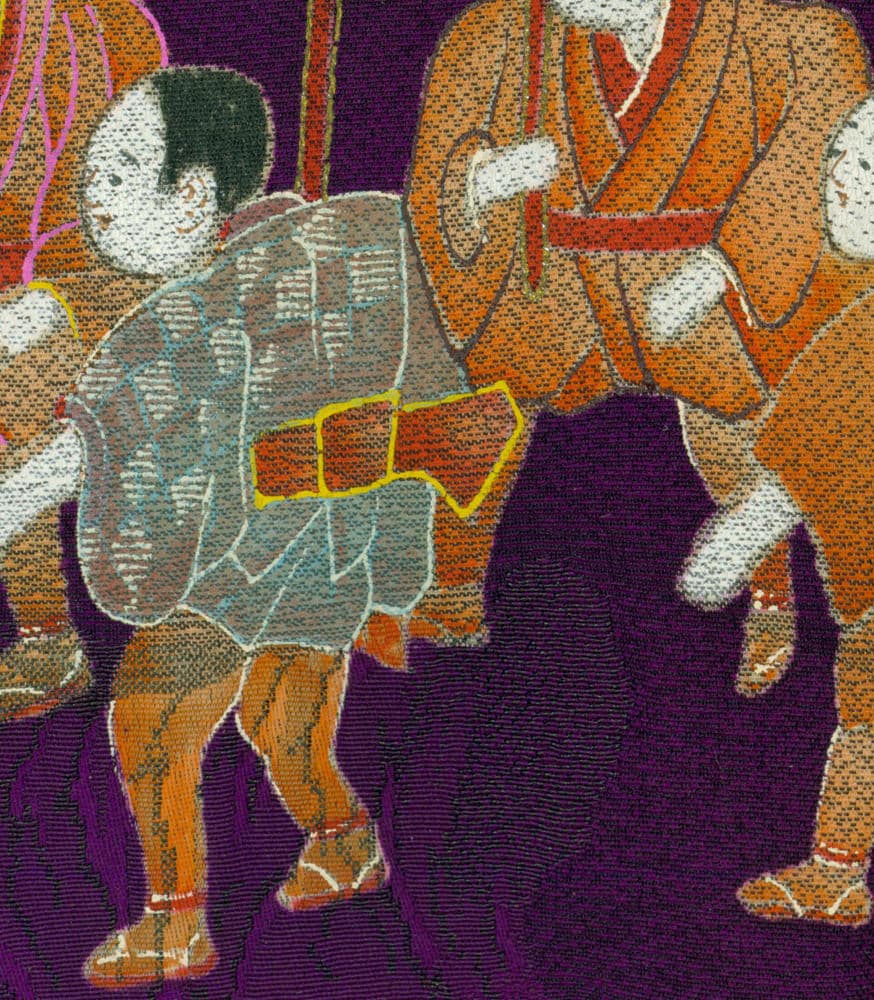 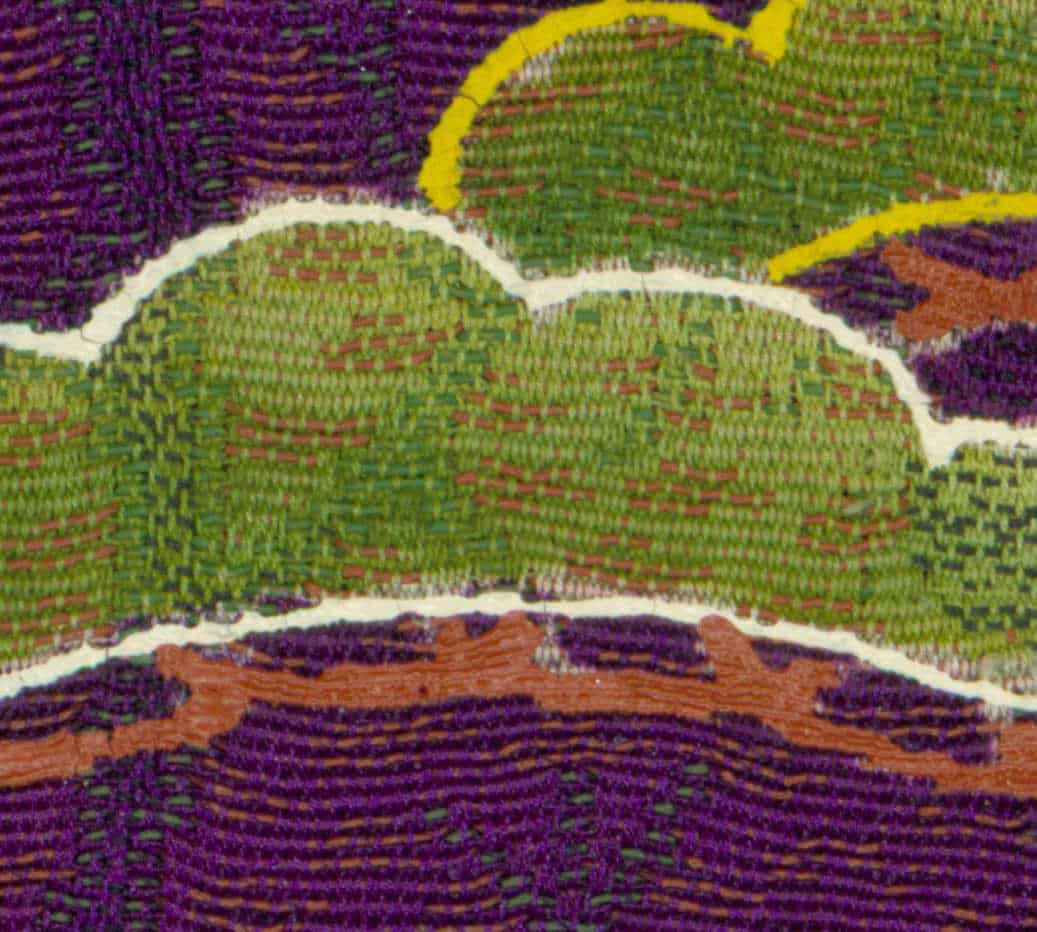 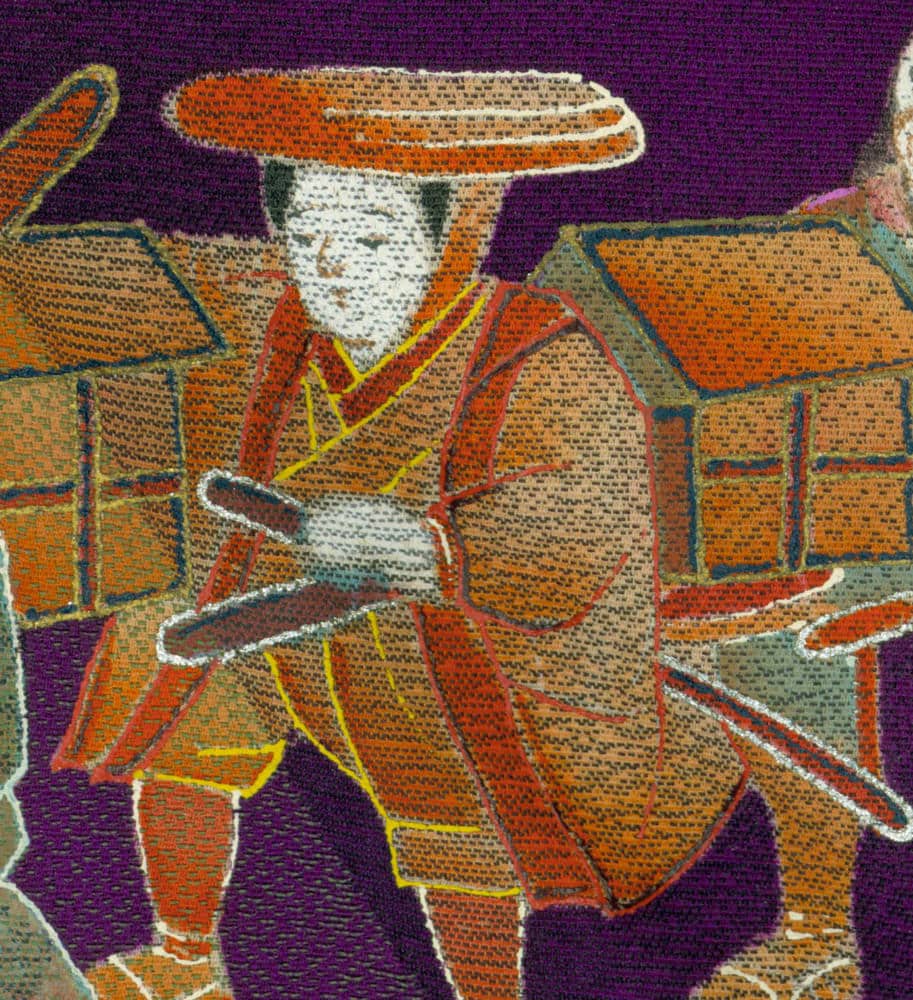 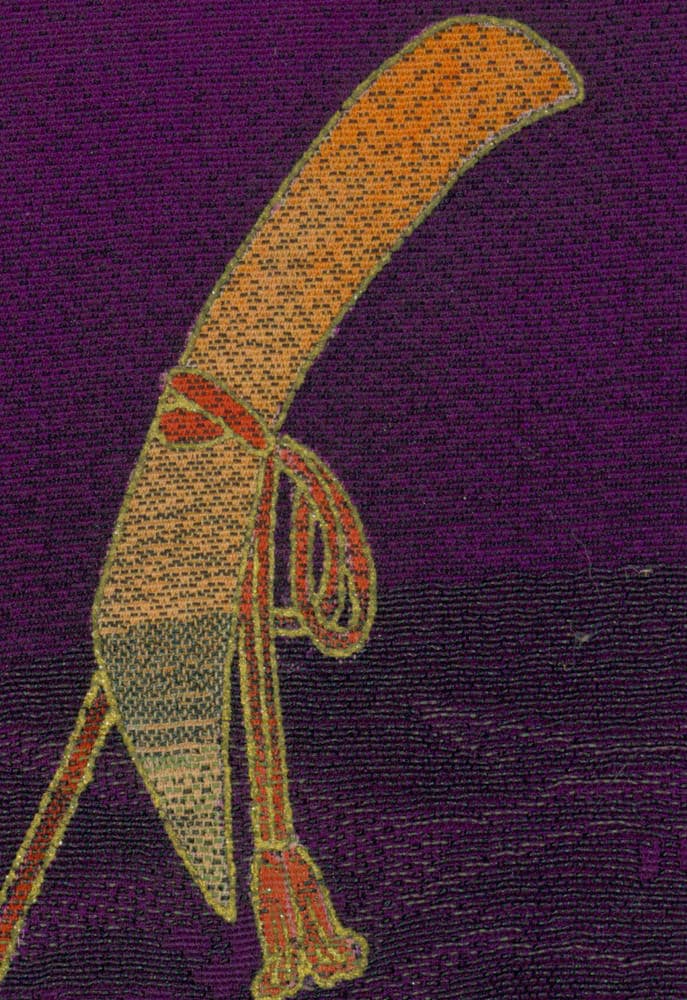 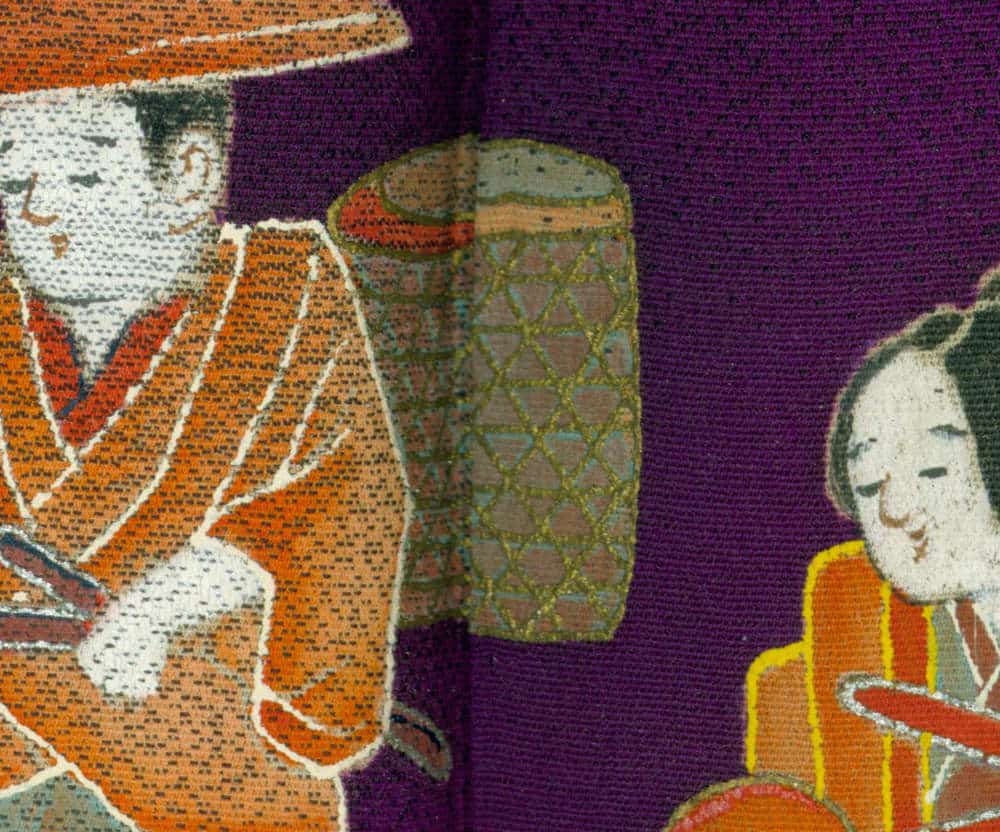 An extraordinary and very unique silk kimono featuring a daimyo procession to Edo Castle. The dark background motifs were created with woven urushi-coated threads, while the castle and thirty-two persons that make up the procession were created utilizing a combination of yuzen resist-dyeing and painting. This would have been a very laborious and expensive garment to create, and was obviously executed by master craftspeople. Red silk lining. Near-perfect condition. 51" from sleeve-end to sleeve-end x 61" height.Edo Castle, also known as Chiyoda Castle, was built in 1457, and is located in Chiyoda in Tokyo, then known as Edo. It was the residence of the shogun during Edo times, later becoming the Imperial Palace by the 20th century. The daimyo, or regional lords, of the Edo period were mandated by the Edo government to periodically come to Edo castle. When traveling, these daimyo, who had considerable wealth, would bring with them many of their servants. With hundreds of daimyo entering or leaving Edo each year, processions were almost daily occurrences in the shogunal capital.Such daimyo processions were often grand spectacles that attracted muchattention, and often formed the backdrop of many woodblock prints and picture game boards, thereby evidencing their hold on the popular imagination. It is said that the most popular form of sightseeing Edo were firstly watching the daimyo processions in front of Edo Castle; secondly, sumo wrestling; and thirdly the theatre.In Tokugawa Japan the richness of color and material in these processions, together with the artifacts carried, were intended as displays of wealth, rank, military power and authority. Just as the size of the procession and the attire of the men in it wereindicators of a lord's status, most of the regalia displayed, which were precisely dictated by bakufu regulation, publicly proclaimed the lord's place in the political universe. These were visual elements of political power, reflections of a lord's position in the daimyo hierarchy, his relationship to the Tokugawa and the family's past military achievements.While images of these daimyo processions were created by artists for woodblock prints and several other mediums, this kimono is the only textile example I have seen that utilizes this imagery. Why would a woman have such a kimono created during the early part of the 20th century, several generations following the demise of the daimyo? My best guess would be that this kimono was created for a wealthy descendent of a daimyo family. Reasoning: in 1869, the year after the Meiji Restoration and the end of feudalism in Japan, the daimyo formed a new aristocracy, the kazoku. In the wake of this change, many daimyo remained in control of their lands, being appointed as prefectural governors; however, they were soon relieved of this duty and called en masse to Tokyo, thereby cutting off any independent base of power from which to potentially rebel. Despite this, members of former daimyo families remained prominent in government and society, and in some cases continue to remain prominent to the present day.