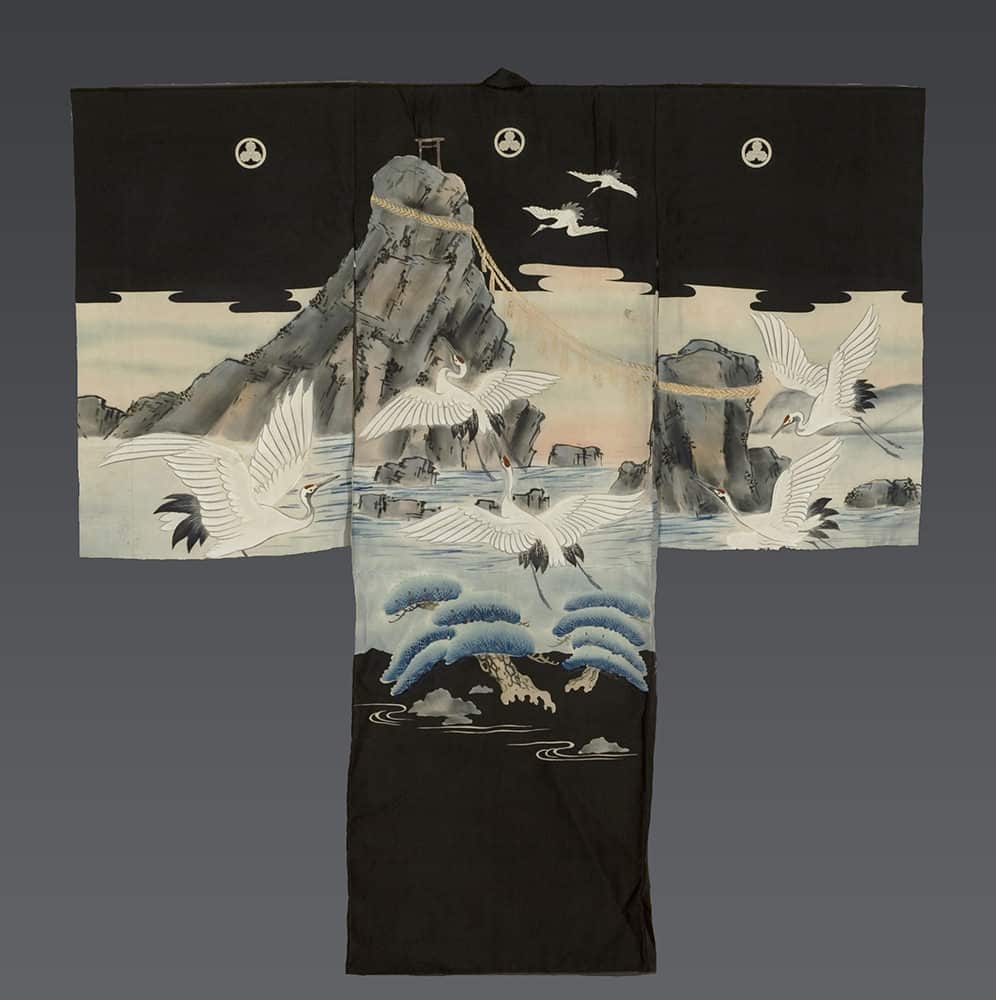 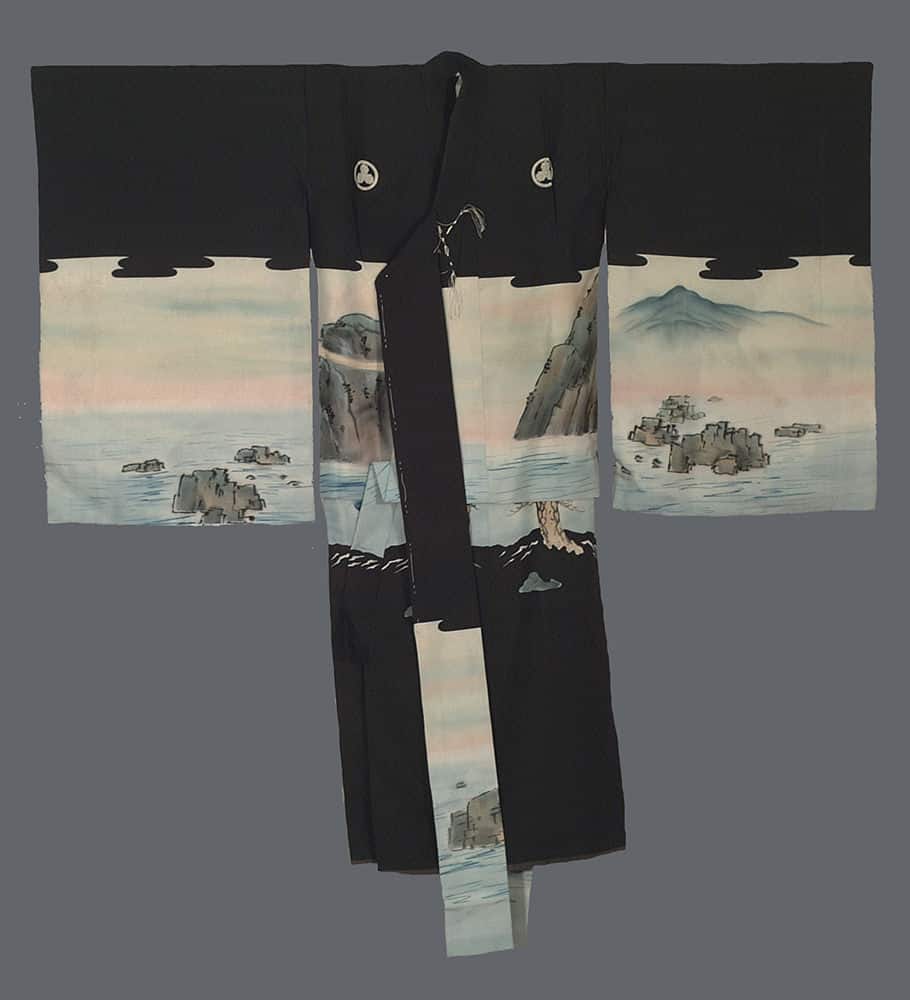 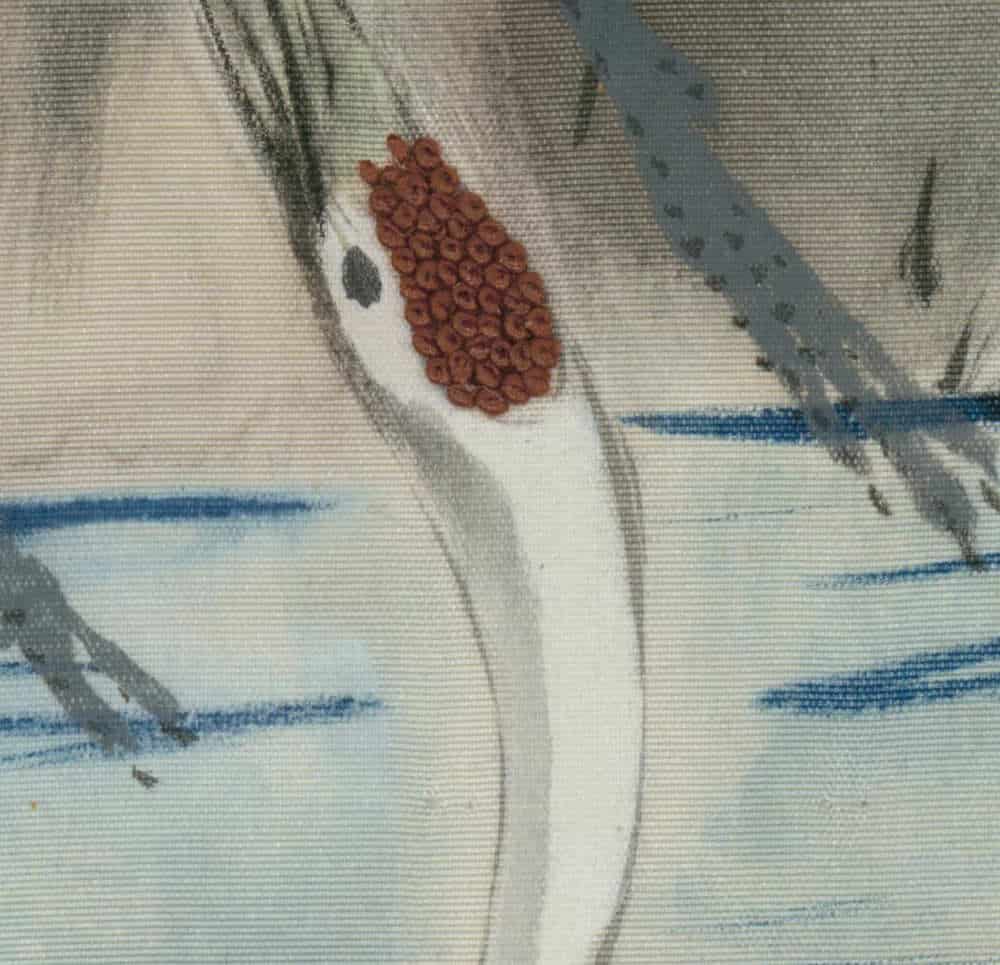 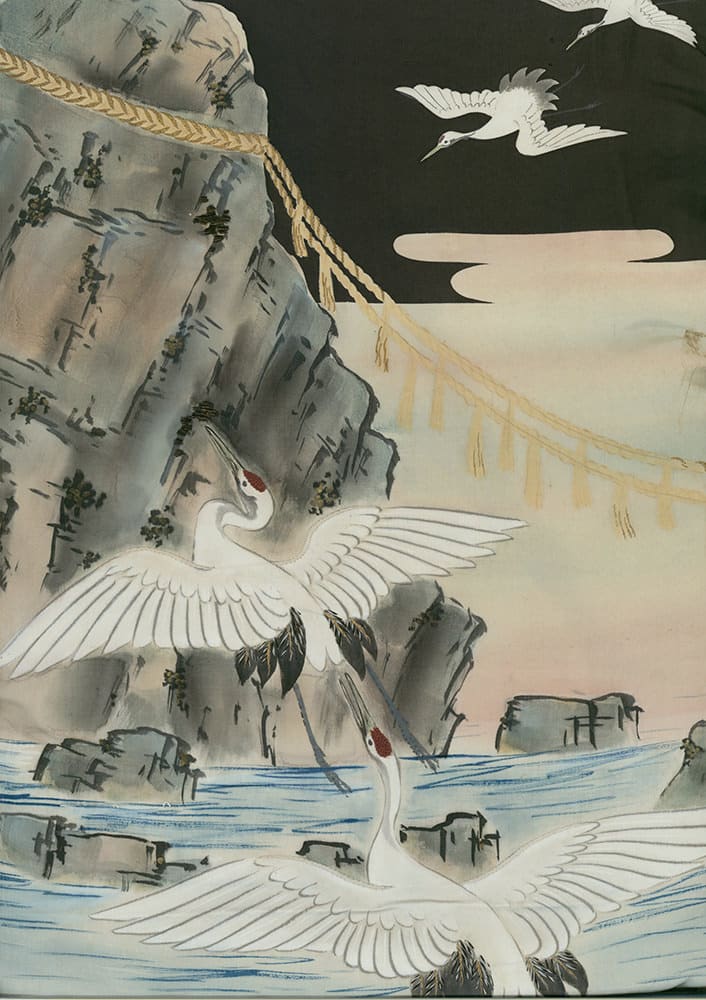 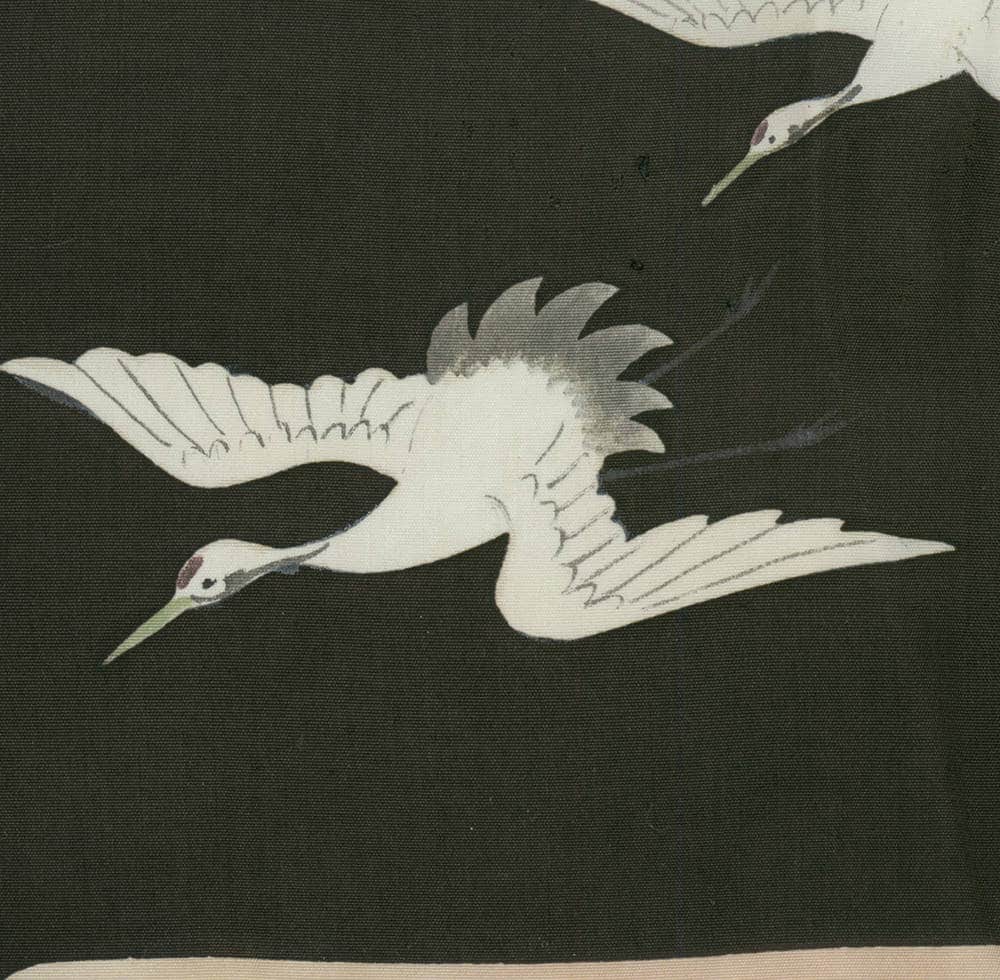 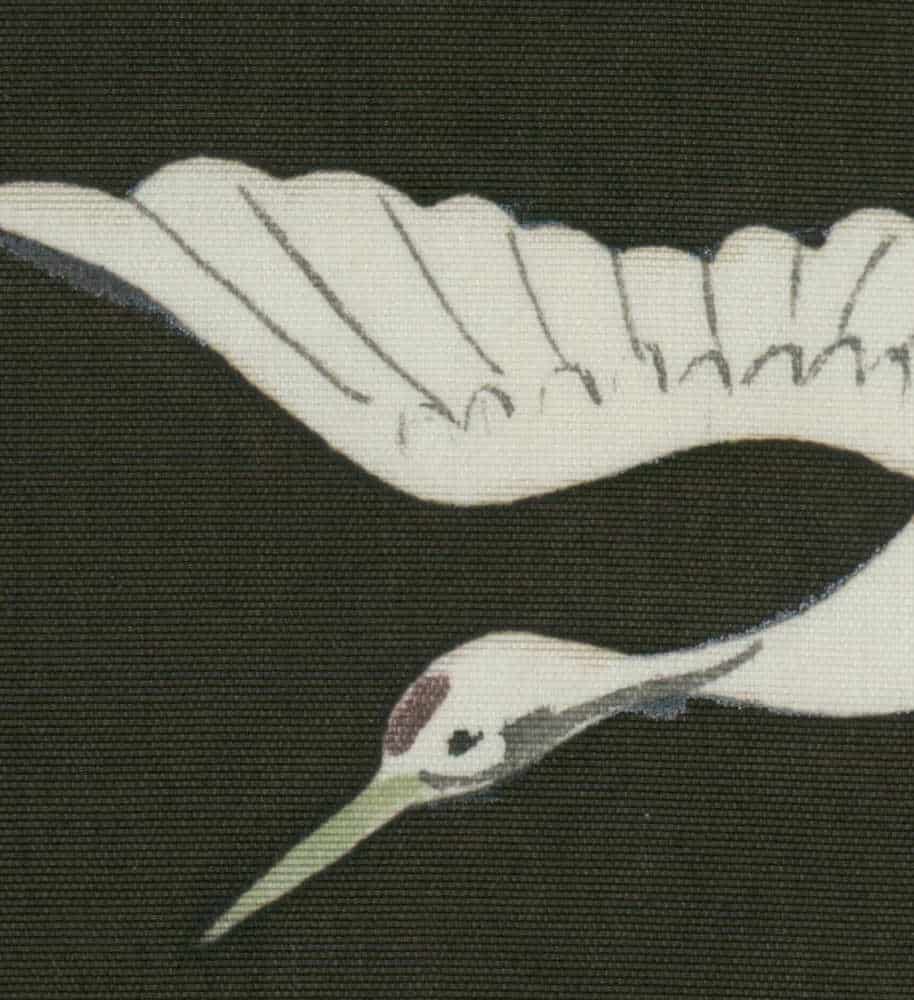 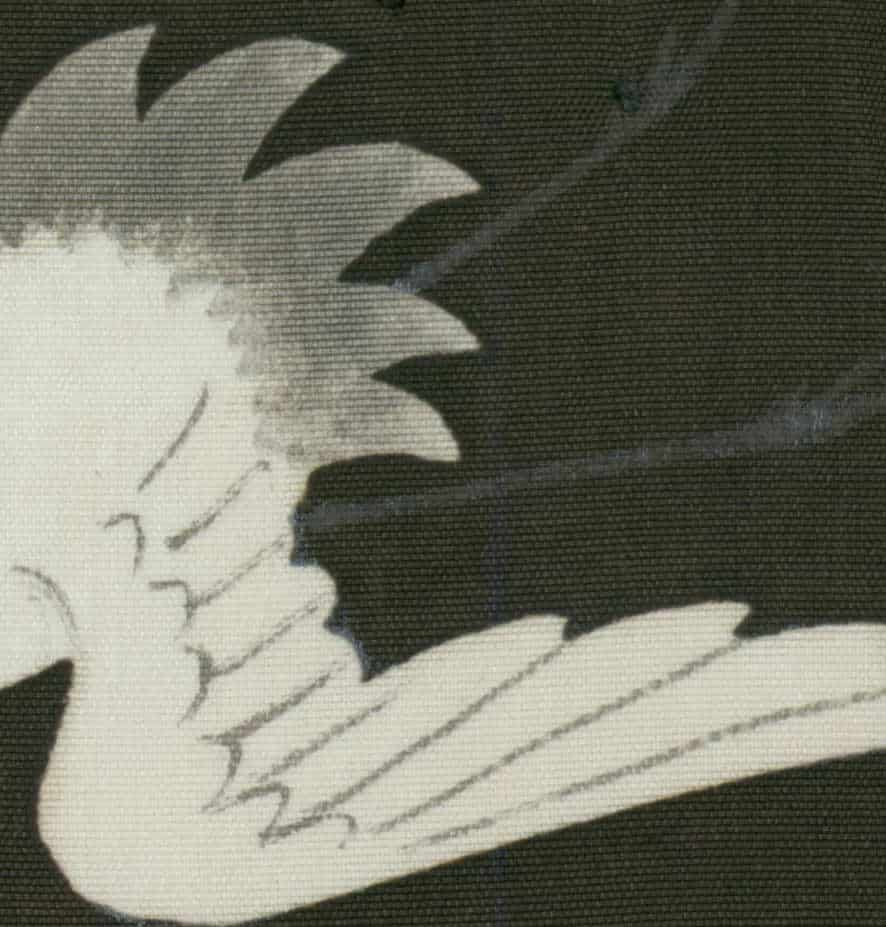 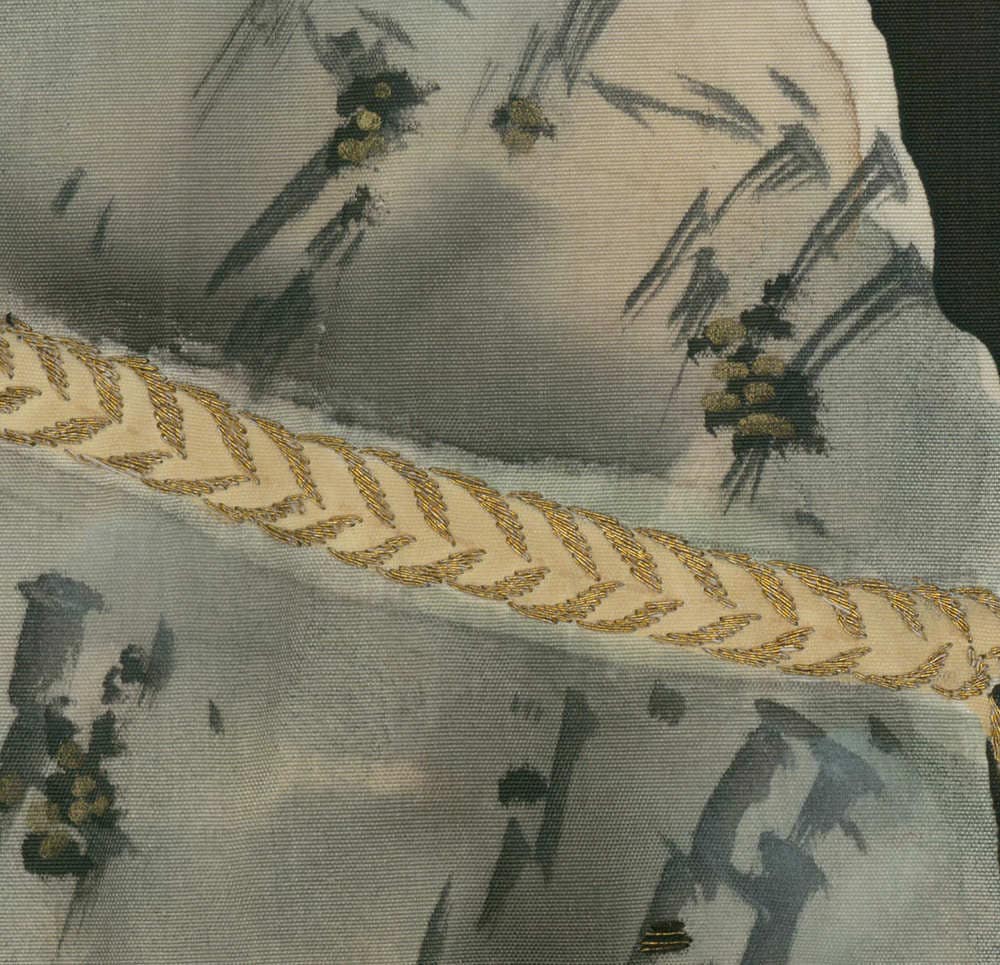 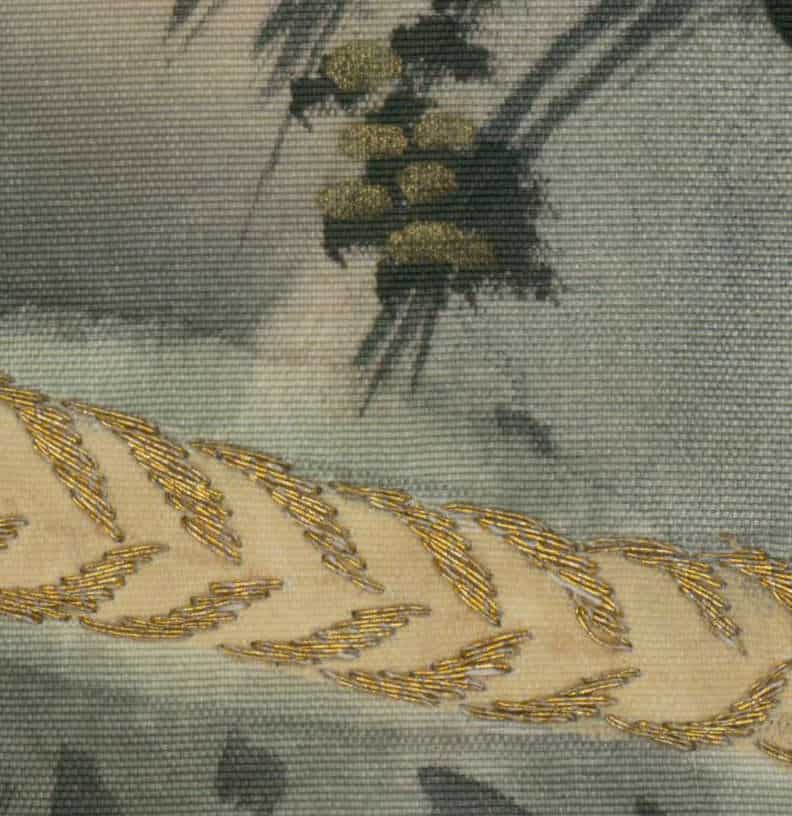 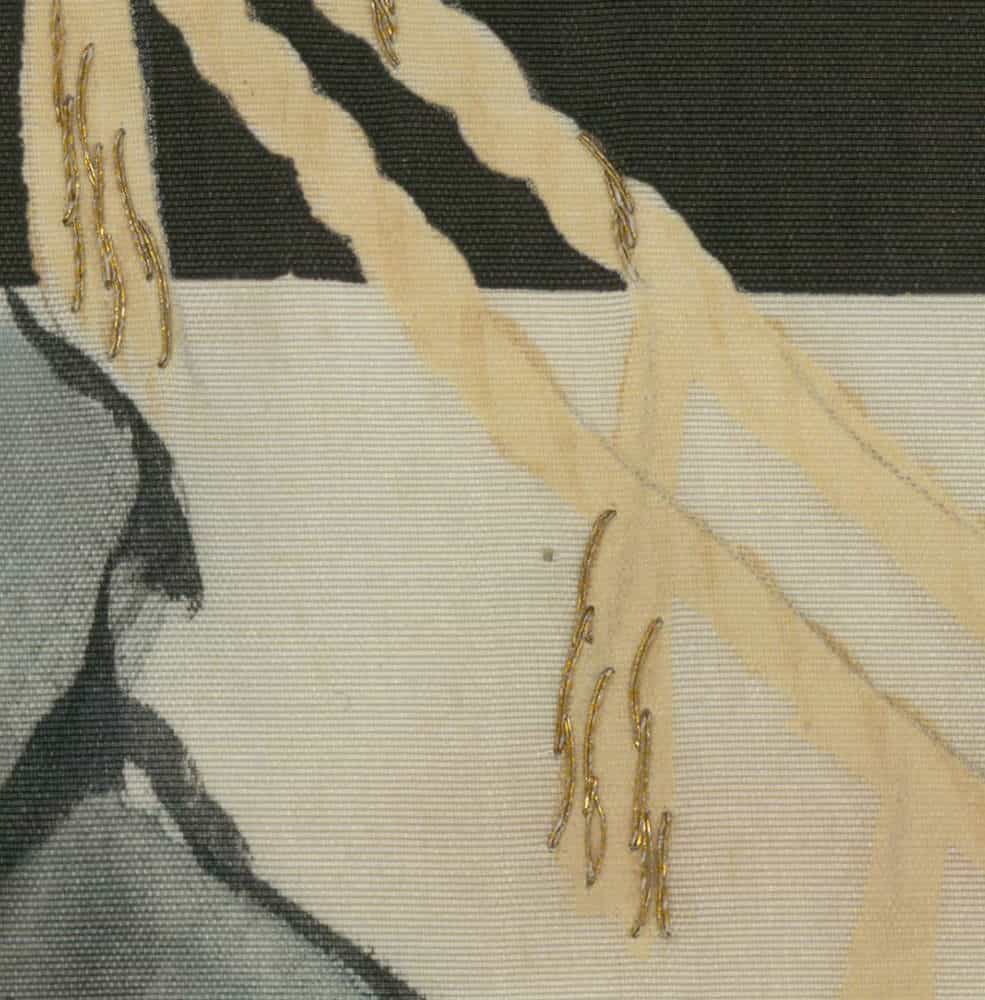 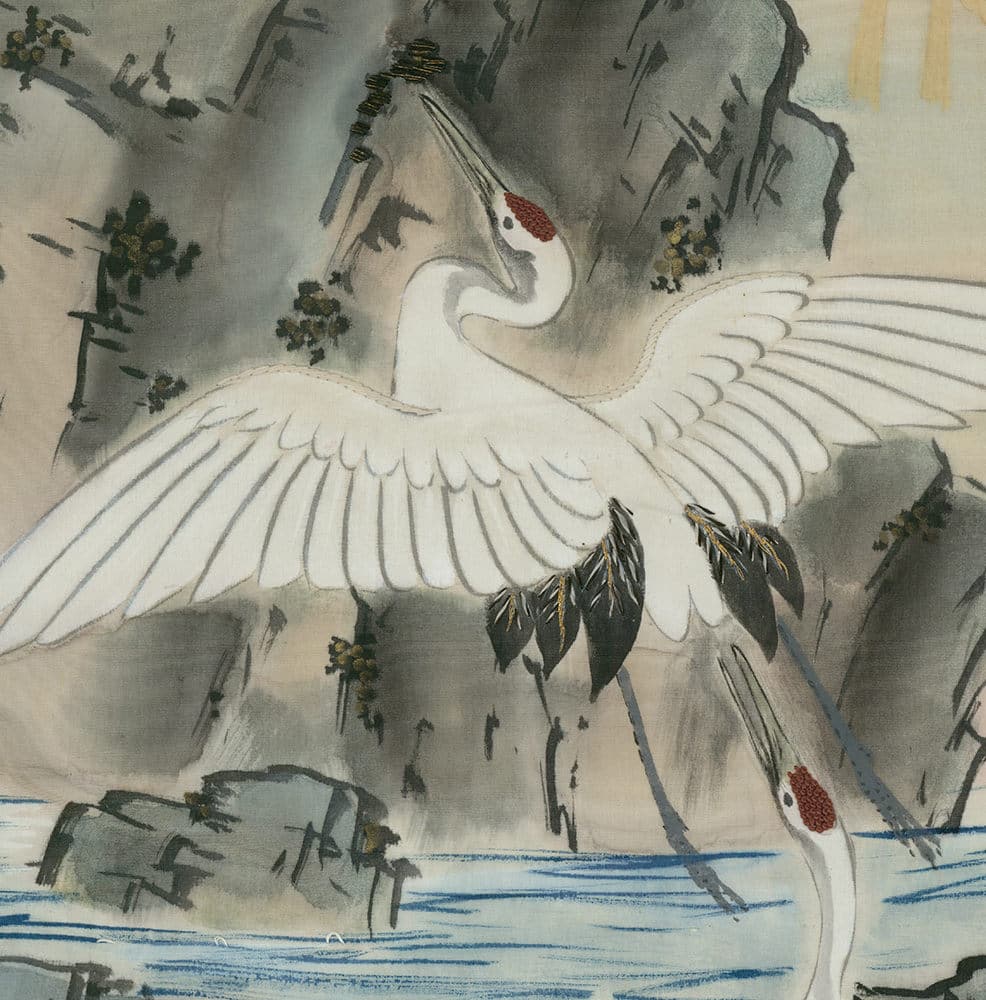 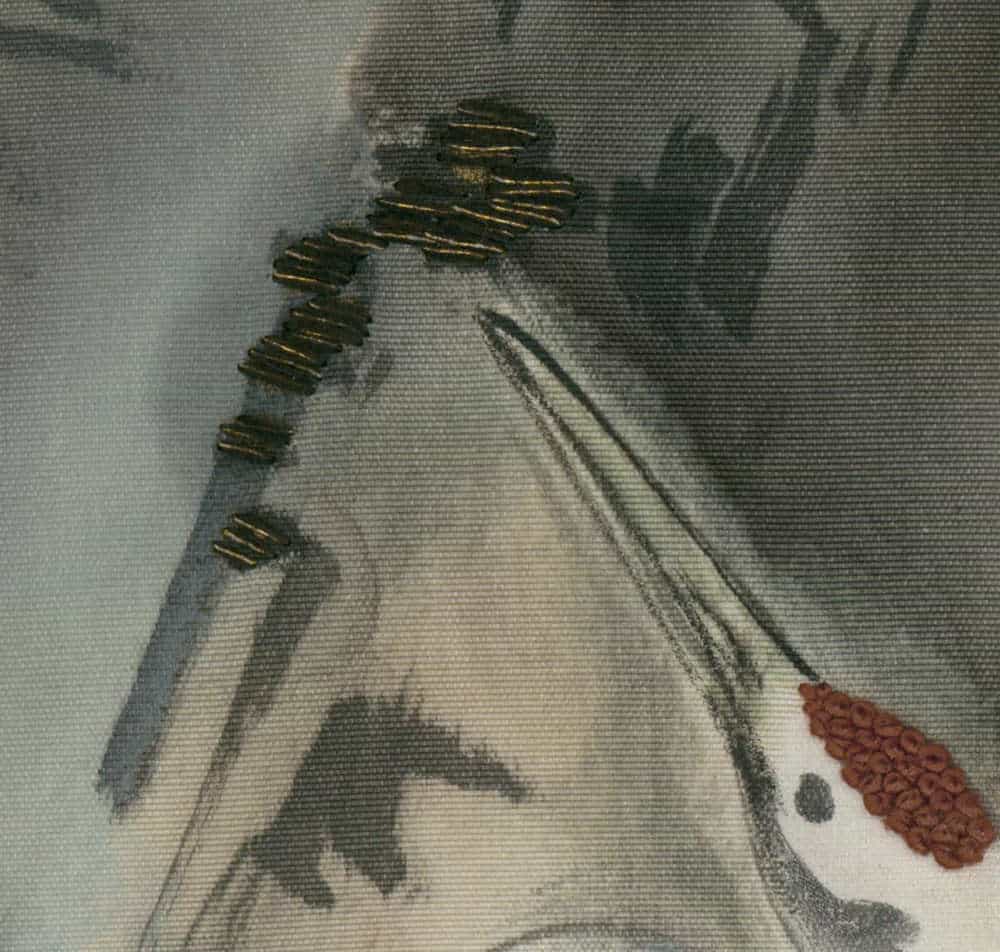 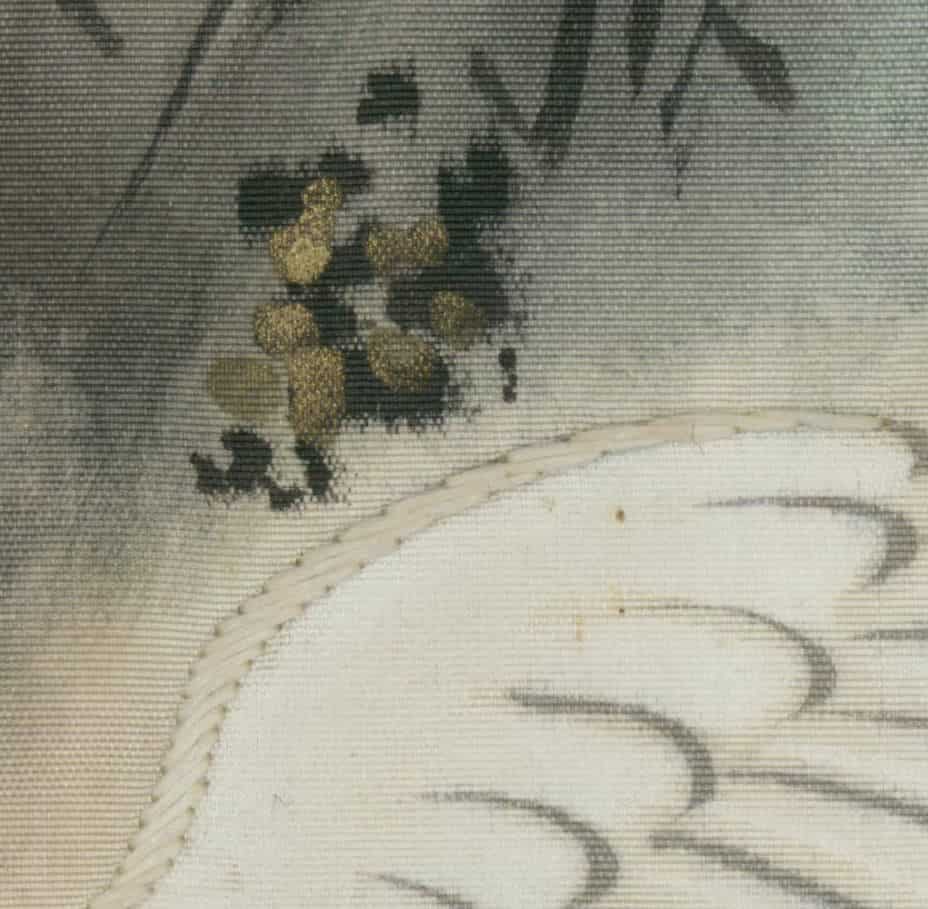 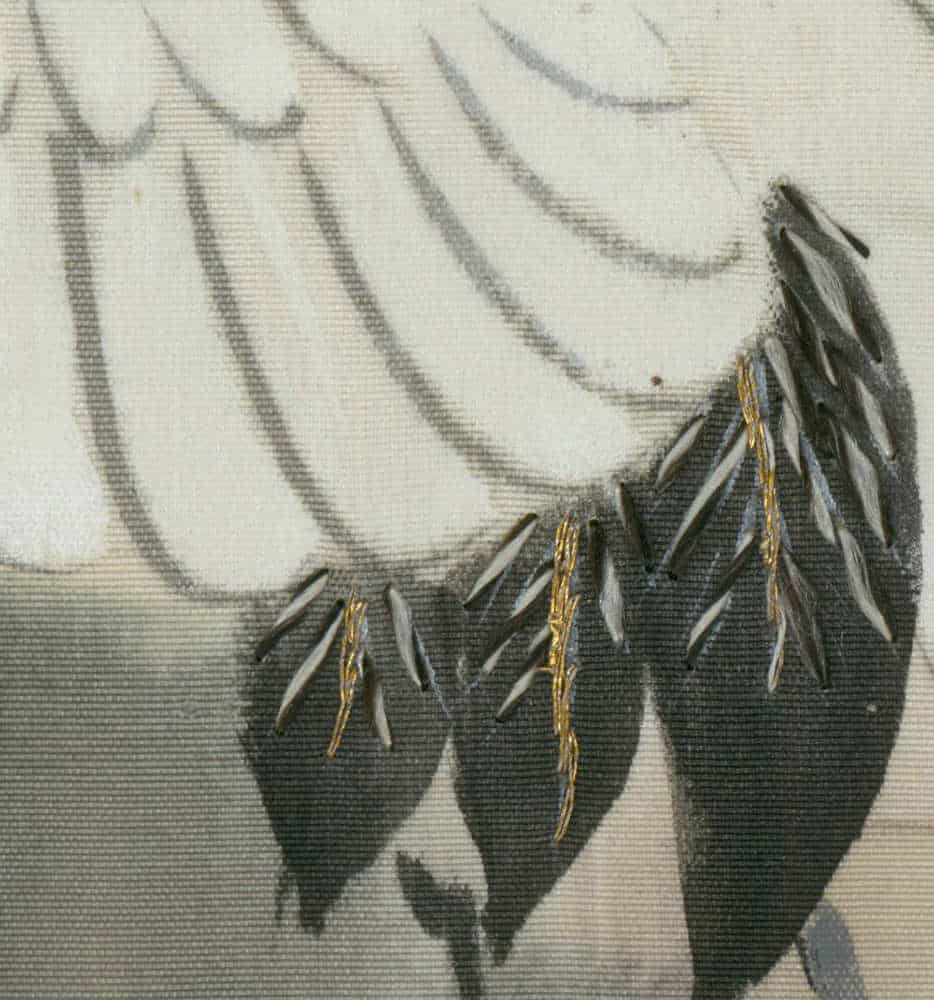 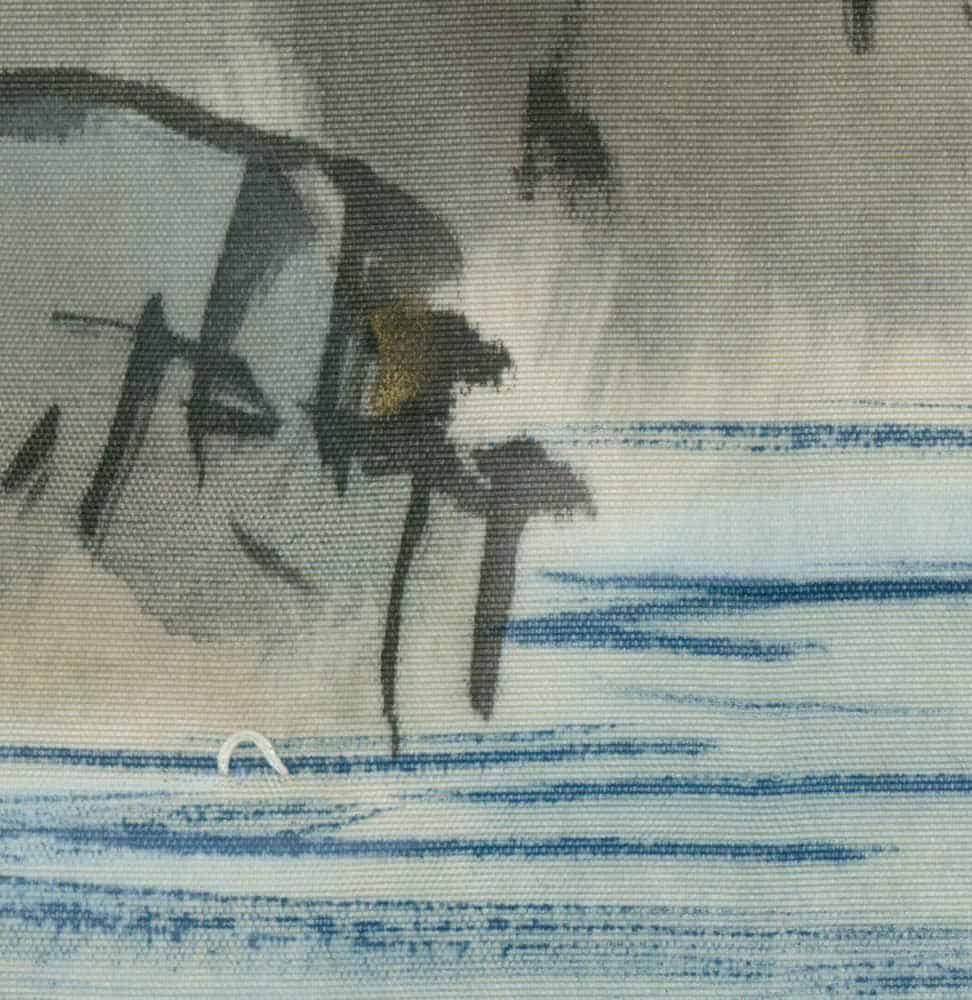 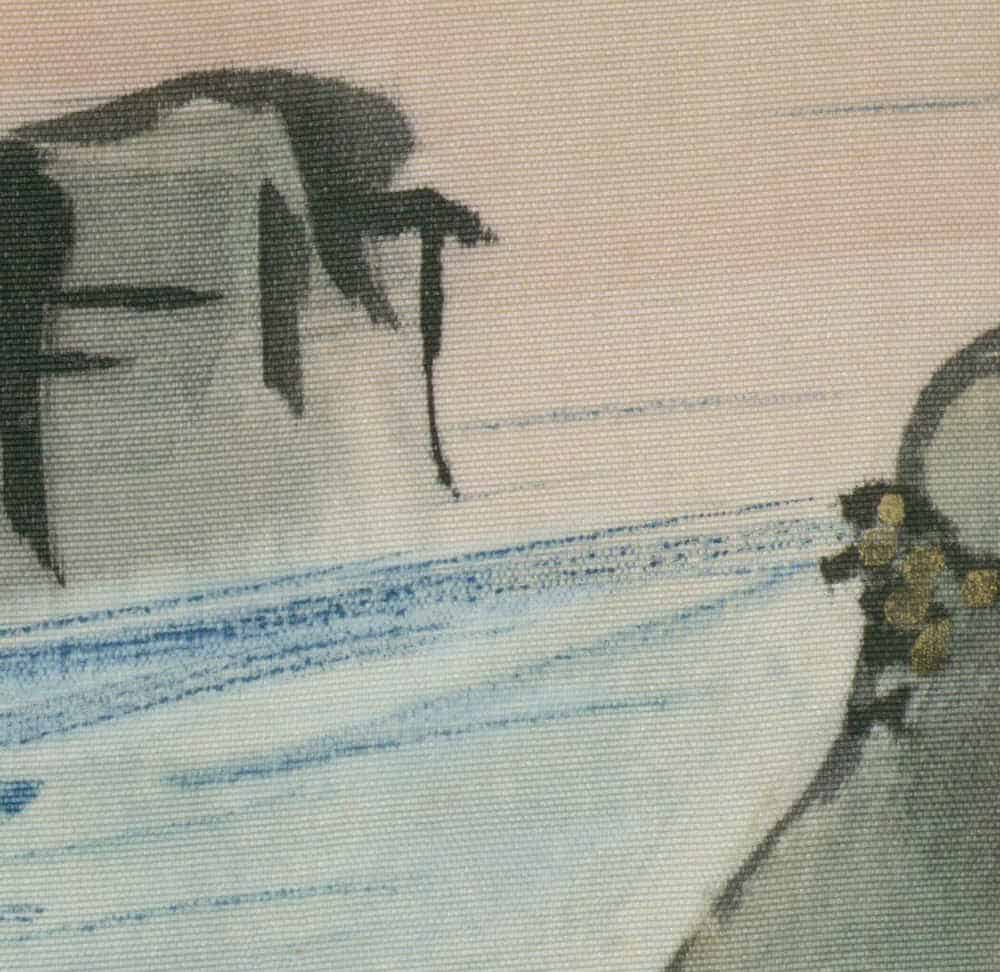 A silk boys antique miyamairi kimono, featuring the famous 'Meoto Iwa' rocks.  Painting  with embroidered highlights.  25" across shoulders x 39.5" height.'Meoto Iwa' translates to 'the husband and wife rocks', which are located near Futami City on the southwestern coast of the main island of Japan, near the Grand Shrine of Ise, the most important location in the Shinto religion.   According to the Shinto religion, these rocks represent the union of the Shinto creator gods Izanagi and Izanami.   The rocks therefore celebrate the union in marriage of man and woman. The rope, which weighs over a ton, must be replaced several times a year in a special ceremony.  The larger 'male' rock, a small Shinto 'torii' (Shinto shrine entrance) at its peak, is nine meters high and the smaller "female" rock is four meters.  These 'Husband' and 'wife' rocks are tied together with a 'shimenawa', a sacred rope made of rice straw which weighs over a ton and must be ceremonially replaced three times each year, in May, September and December.  The 'shimenawa'  is blessed by the local Shinto priests with water and salt. The tassels that hang down, sometimes represented with carefully pleated white paper, are called 'shide'. The 'shimenawa'  possesses the magical property of keeping evil spirits away and welcomes the faithful to a sacred place. Some say that when a couple makes a pilgrimage to this shrine and the wind blows between the rocks rustling the tassels, a prayer is said by the unseen spirits of the wind and the water to protect them and bring good fortune.  Twice a year, the sun rises through the saddle of the two rocks from a certain angle, providing a beautiful natural frame for an important symbol of Japan---Hinomaru, the rising sun. To some, this symbolizes the birth of Japan.