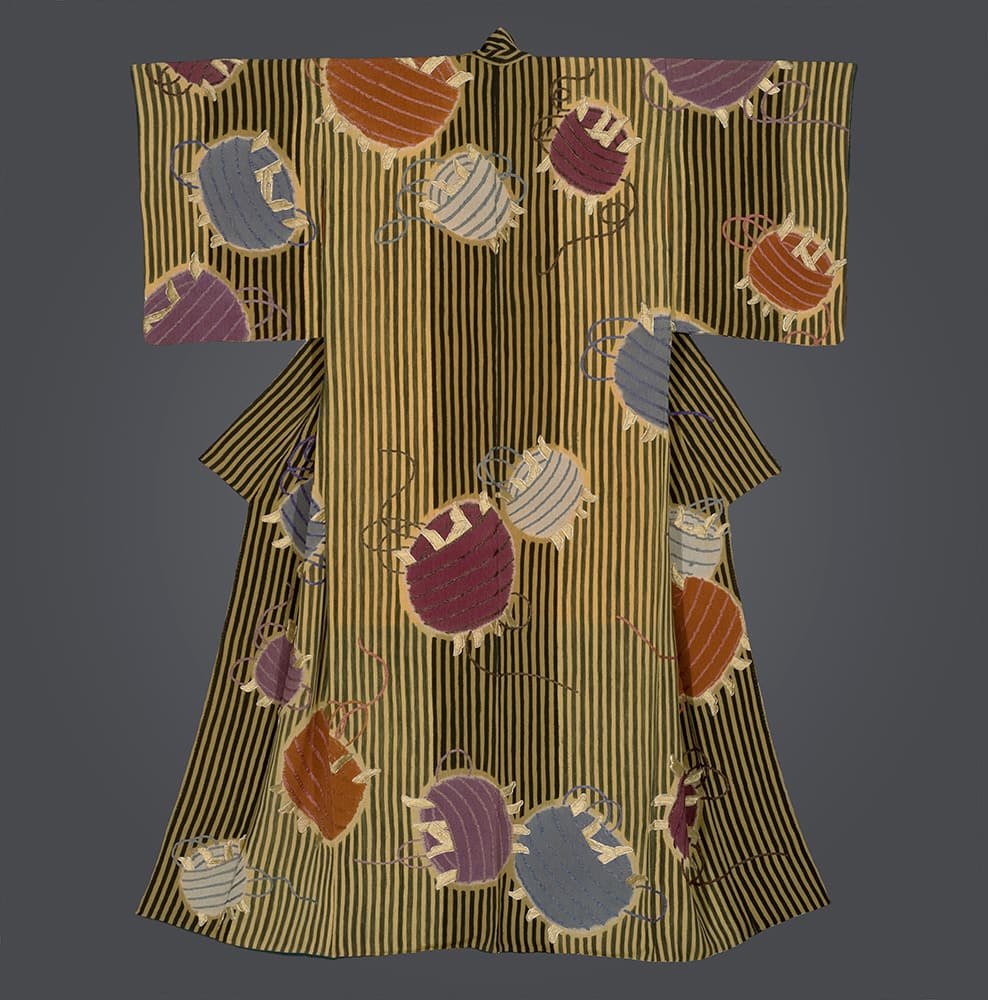 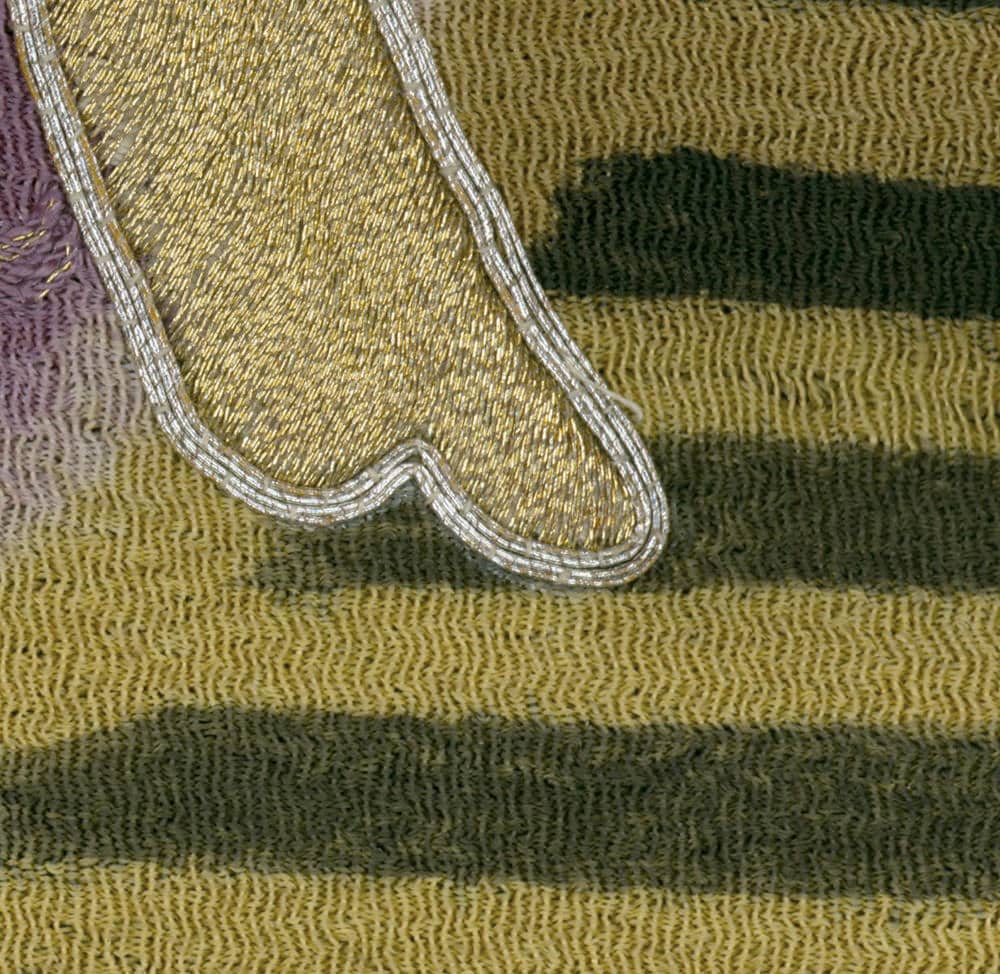 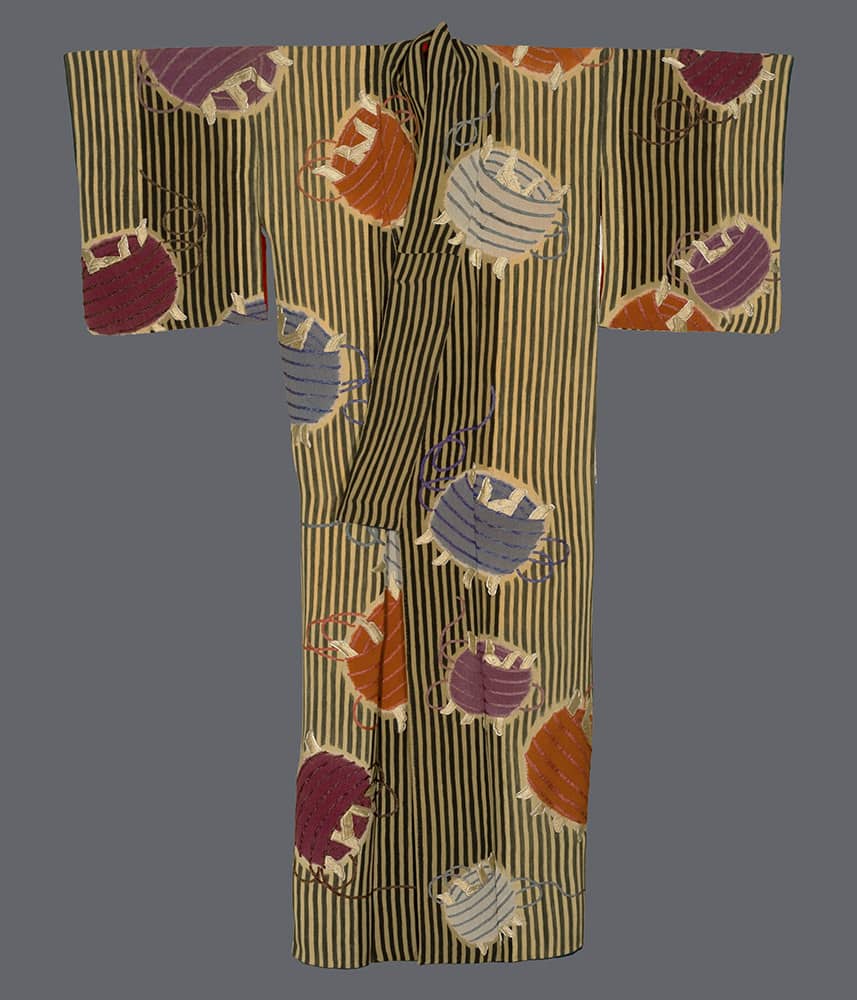 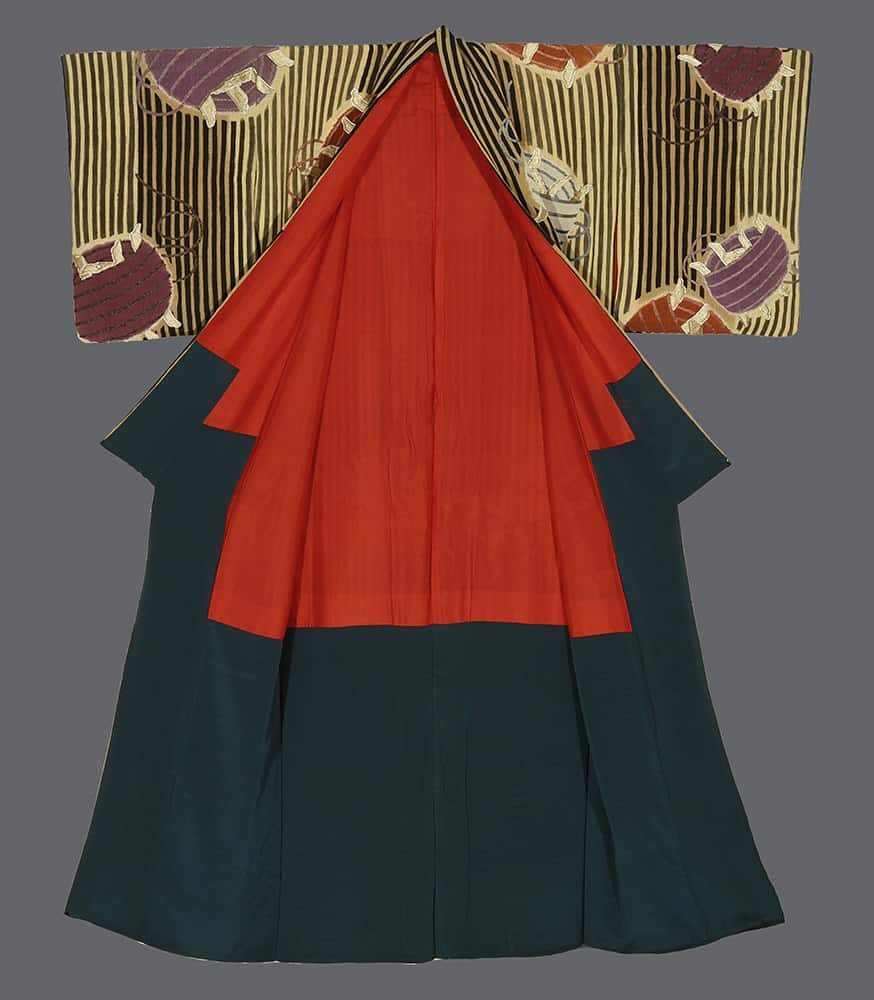 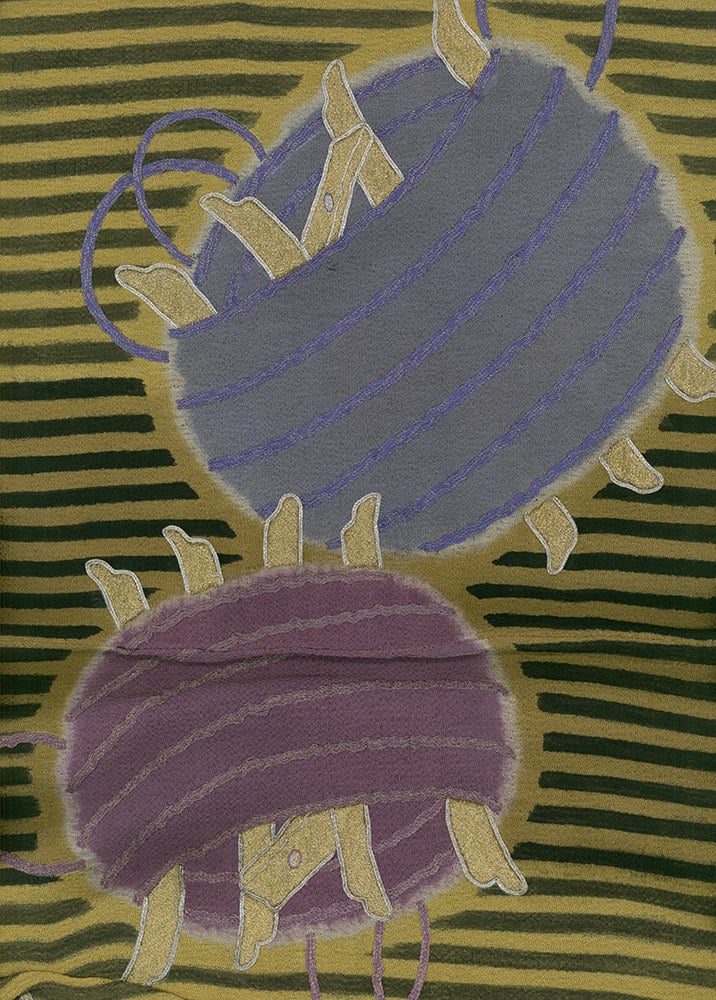 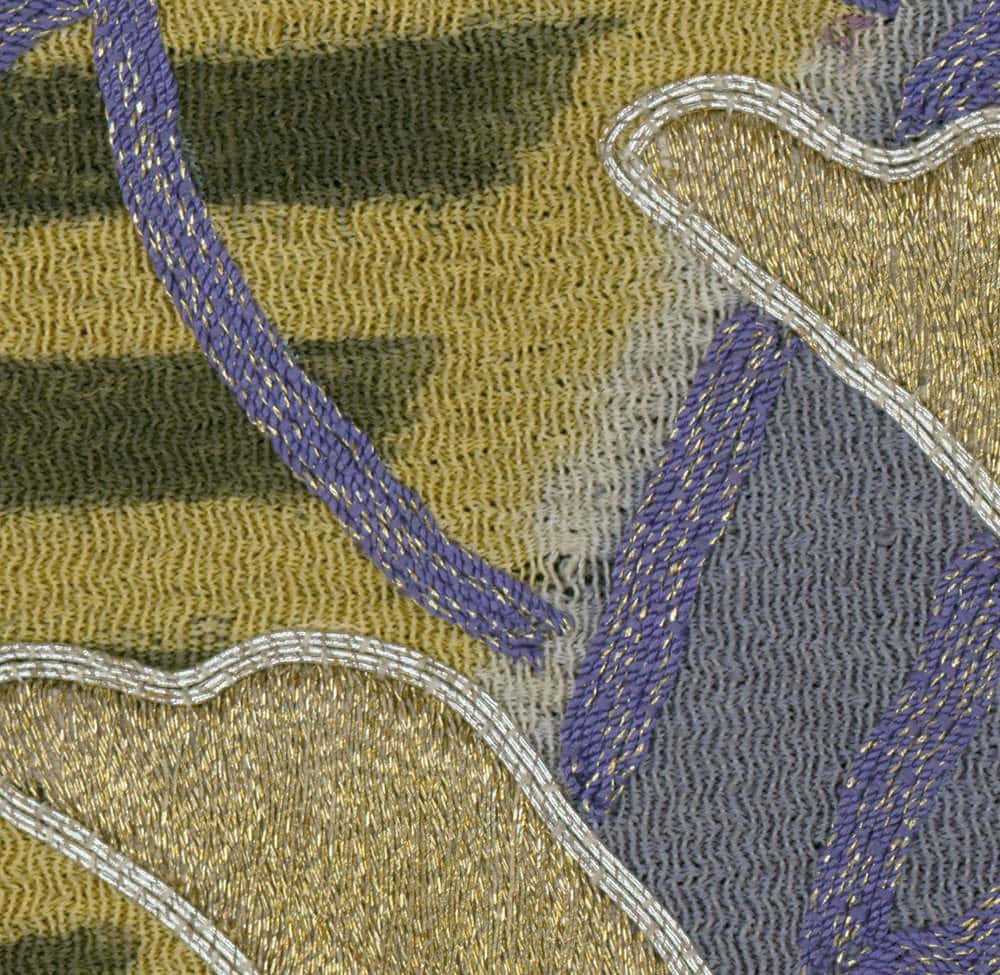 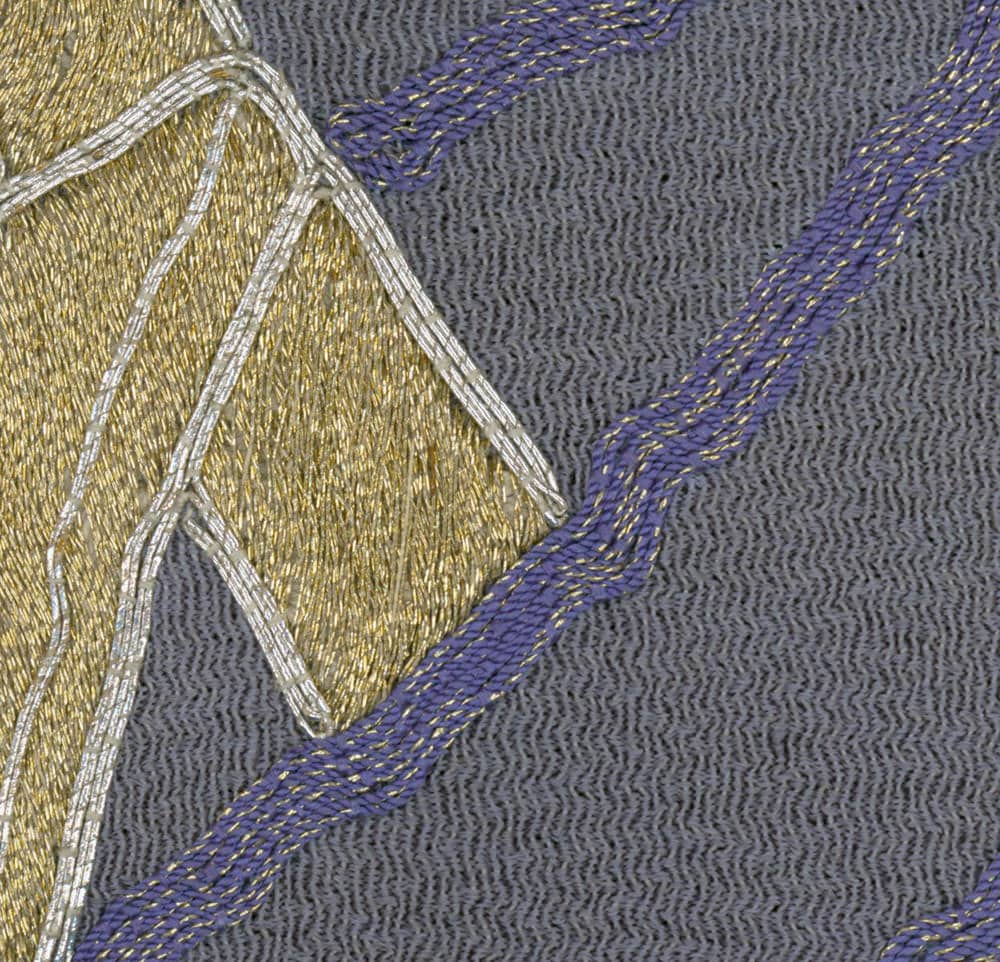 An exceptional chirimen silk kimono featuring threaded bobbins amongst alternating golden yellow and black vertical stripes. This kimono was obviously created as a labour of love by skilled artists: our best understanding is that the artists first created a white crepe silk kimono. Step 2 involved dyeing in areas - using the shibori (tie-dye) to leave a background color for the large bobbins. Step 3 involved dyeing the remainder of the kimono a golden yellow - excluding the bobbin areas and a narrow white border surrounding the bobbin motifs. Step 4 had the artists painstakingly hand-stain vertical black stripes on the yellow background, creating the effect of black and yellow alternating stripes. Finally, much 3-D silk and metallic-thread embroidery to decorate and give depth to the bobbin motifs. 50" from sleeve-end to sleeve-end x 62" height. Traditionally, silk-reel bobbin (itomaki) motif, because of it's association with thread and weaving, is emblematic of the Tanabata festival, observed on the seventh day of the seventh month, celebrates the yearly reunion of the Herdsman (Altair) and Weaver Girl (Vega) stars. The legend in short has that the Weaver Girl, daughter of the Celestial Emperor, was said to have fallen in love with a Herdsman and consequently neglected her weaving duties. As a result, the two lovers were condemned to spend the entire year on different sides of the Heavenly River (Milky Way) until the seventh day of the seventh month, when the Herdsman was allowed to cross the Milky Way and be united with his lover for a single night. Thus the silk-reel bobbins on this kimono were intended to be emblematic of the Tanabata festival; moreover, weaving implements could and were used by the Japanese for the appeasing vengeful spirits.

Price:
$
75,000.00
US
Available: Inquire
GalleryOrderingContactAbout UsGallery StatementNewsGlossary
Copyright © 2023 Yorke Antique Textiles
Thank you! Your submission has been received!
Oops! Something went wrong while submitting the form.