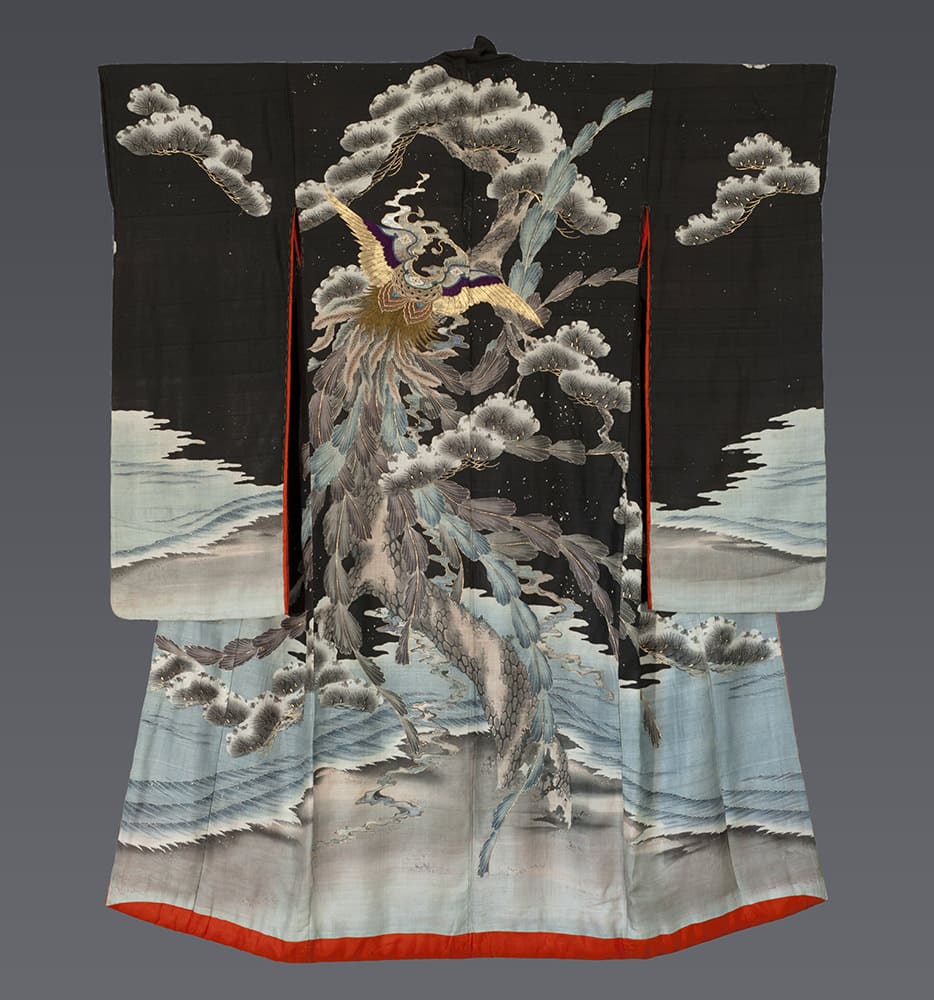 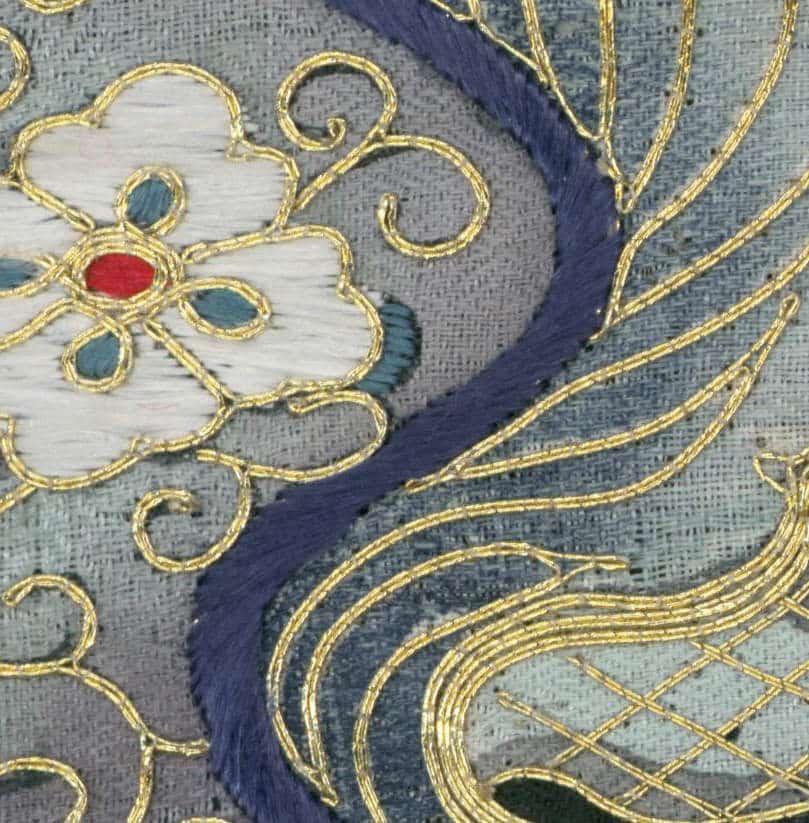 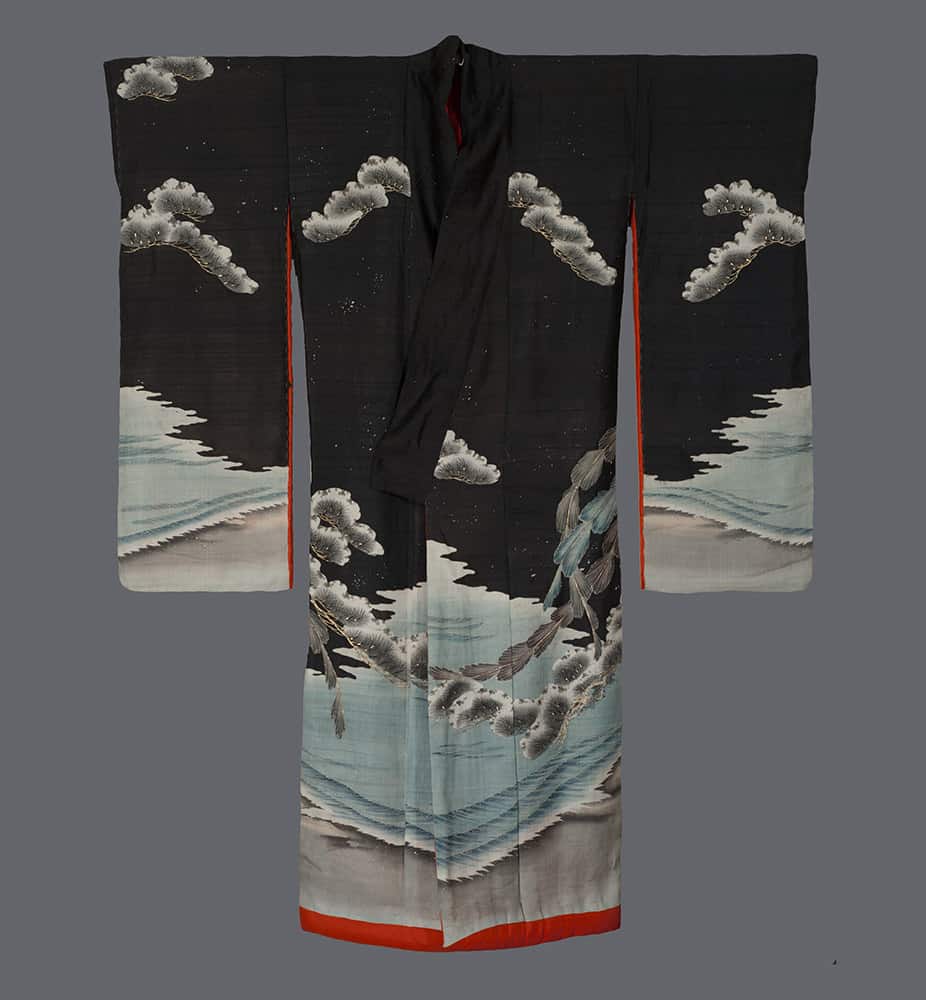 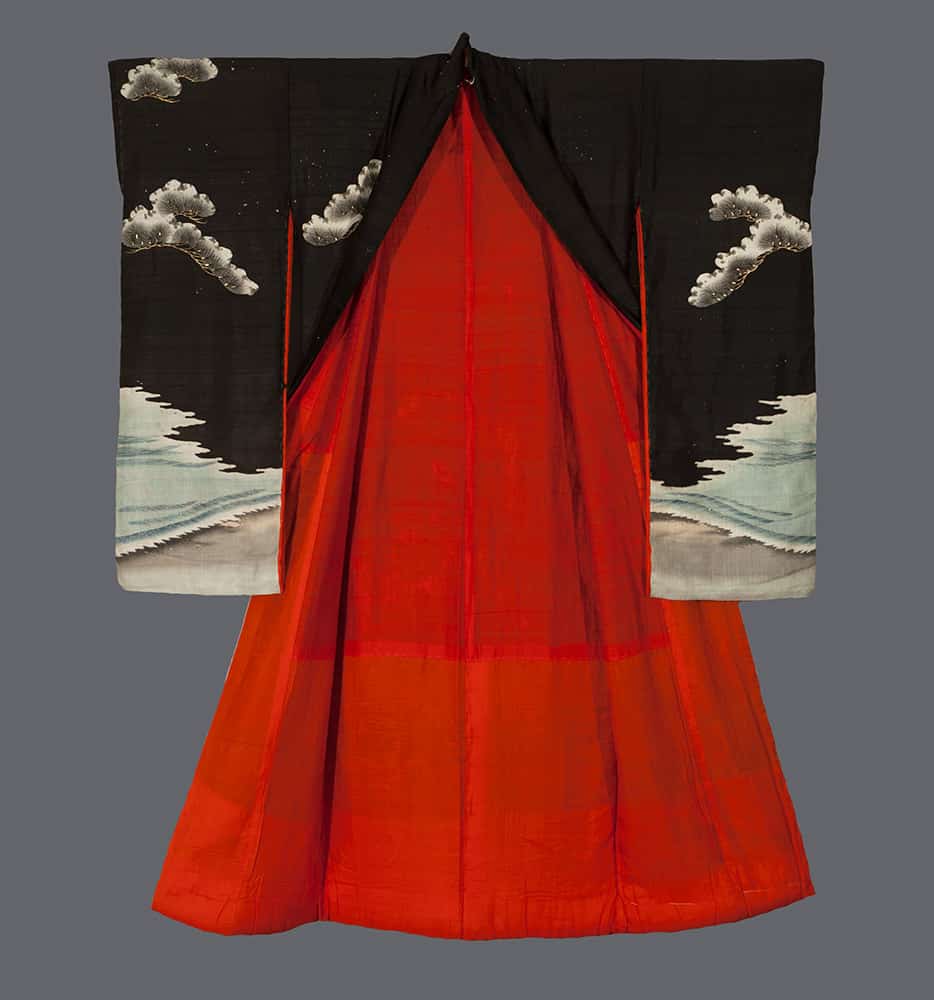 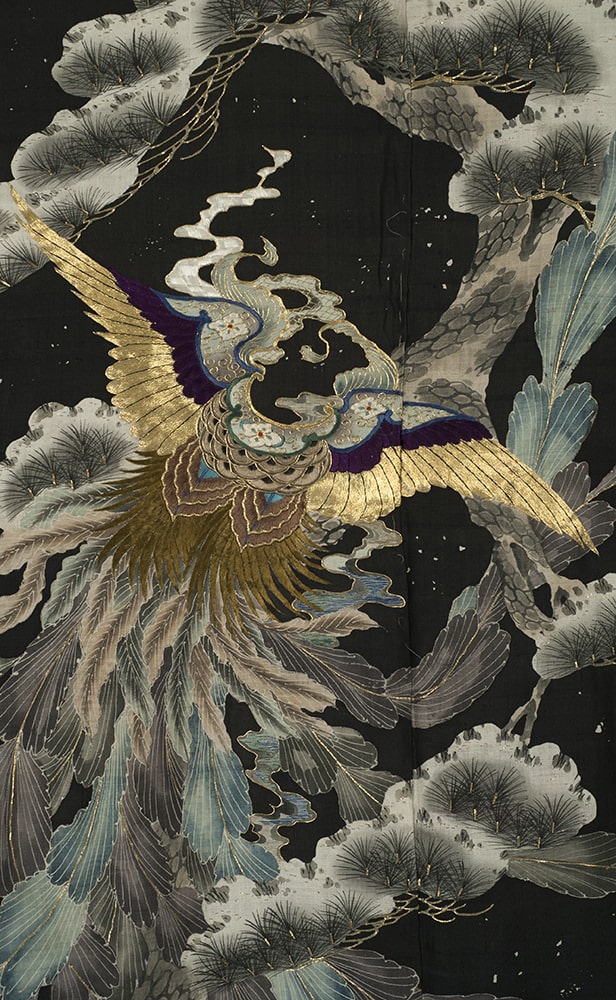 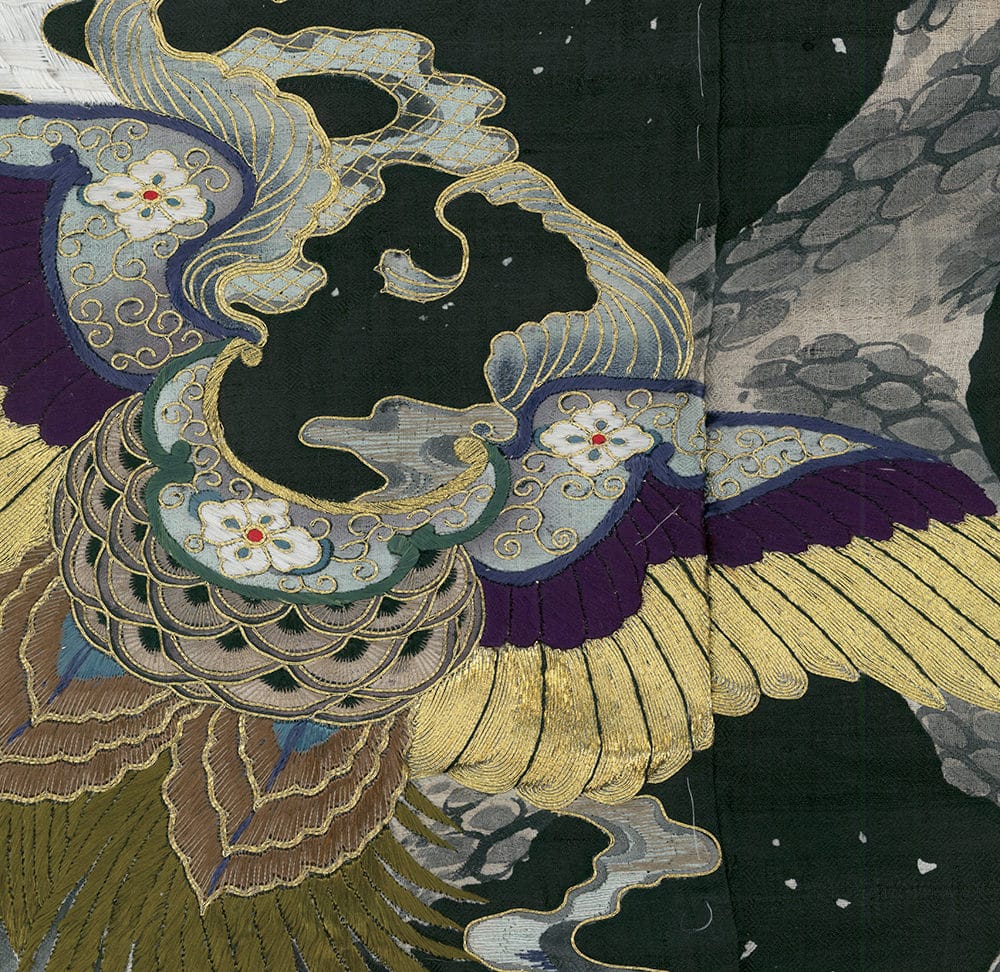 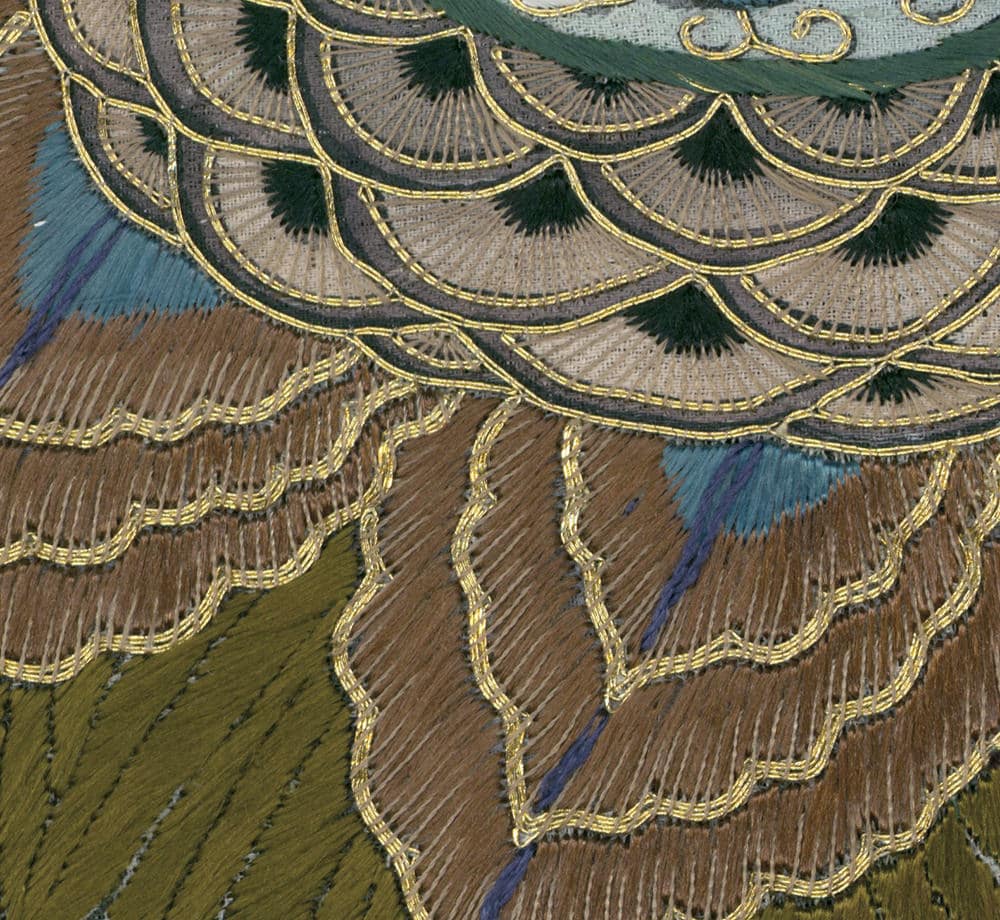 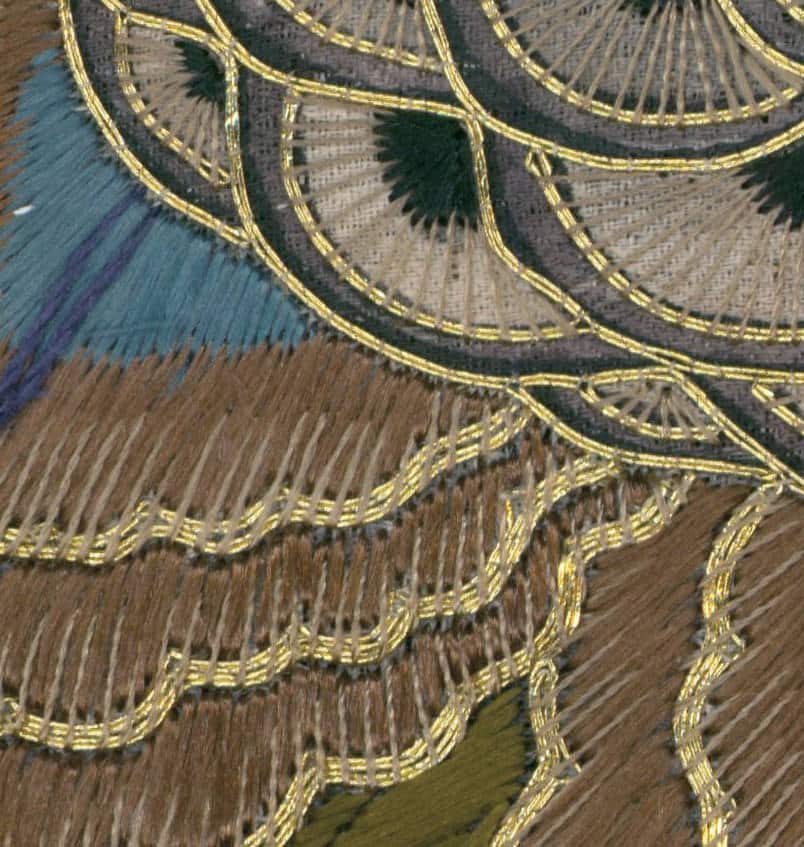 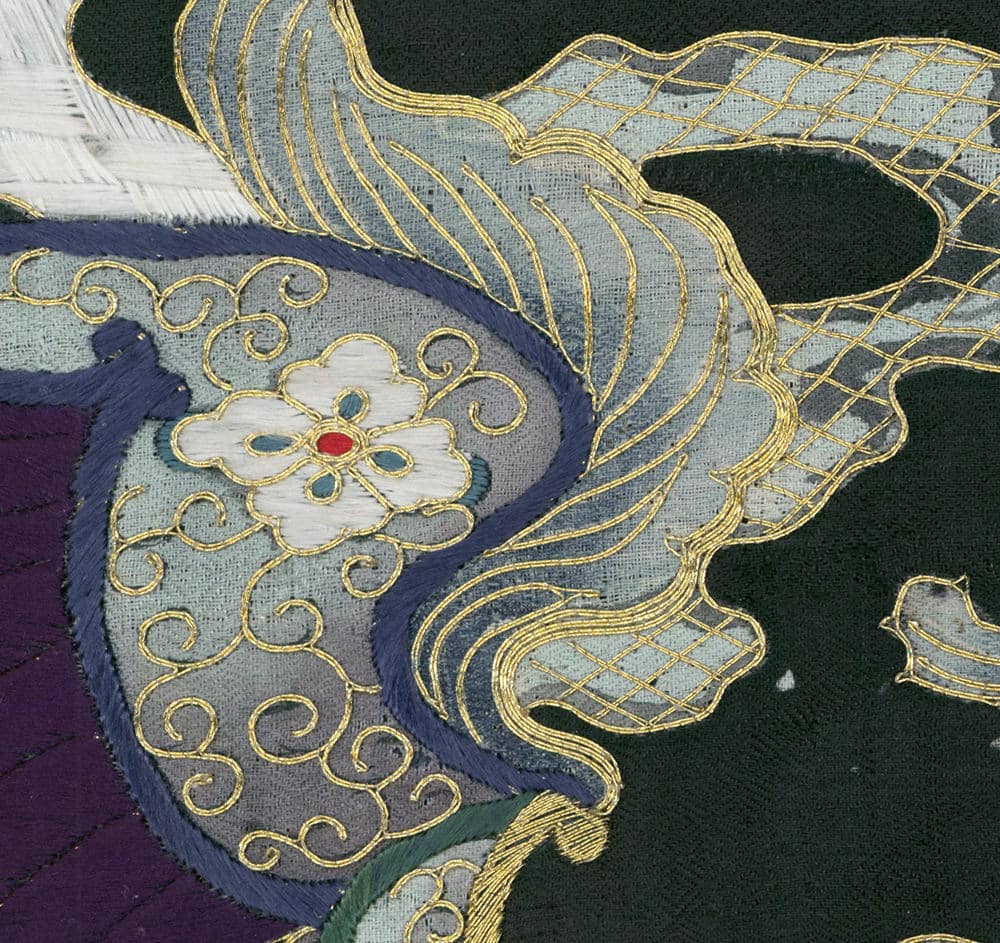 A very fine and soft rinzu (figured silk) wedding robe featuring motifs from the Noh play Hagomoro (The Feathered Robe).  This uchikake has a rinzu (figured silk) base of tiny interlocking diamonds.  The robe is lightly padded, with a thickly-padded hem.  The inner lining is dyed with beni (red-orange hue derived from the safflower).  48" along shoulders x 60" height.  The Hagomoro legend involves the story of a poor fisherman named Hakuryo, who, walking at night near Miho's Matsubara Beach, comes across hanging on a pine branch a magical feather-robe called Hagomoro, embroidered heavily with gold.   After the fisherman takes the Hagomoro into his possession and feeling much wealthier, he is confronted by the owner of the robe who had removed the robe to indulge in an ocean swim, a Tenyyo, a female Buddhist immortal who is incapable of returning to heaven without the powers of the Hagomoro.  Initially, the fisherman refuses to return the robe, but eventually relents after she consents to perform a celestial dance for him, wearing the hagomoro.  She dances joyfully, fulfilling her promise, and rises slowly back to heaven. Why place the motifs of this legend onto a wedding robe?  For at least a few hundred years there has existed a Buddhist shrine in proximity to Matsubara Beach, a place popular for visitors viewing spring cherry blossoms, a place said to produce harmony between married husband and wife.  Wedding robes typically sport five mon (family crests); the fact that this example lacks family crests is interesting and perplexing.  Stage costumes such as those used in kabuki also are devoid of family crests, however, such stage garments only had to impress viewers from afar, so were of thick silk with motifs works in extremely thick and robust embroidery.  This could potentially be a Tayuu (elite geisha from Kyoto) robe, but this idea would have to be researched more.The scene depicted on this robe probably represents the moment the fisherman Hakuryo first sights the magical feather robe.  On a clear star-filled night near the seashore, the hagomoro resplendently lies on a branch of a pine, it's gold wings surely causing Hakuryo's heart to race.  The artist depicting this scene has utilized for the magic robe the most refined gold-covered couching, and embroidery and painting of the highest order. The artistry and refinement exhibited by this robe is extraordinary.

Price:
$
75,000.00
US
Available: Inquire
GalleryOrderingContactAbout UsGallery StatementNewsGlossary
Copyright © 2023 Yorke Antique Textiles
Thank you! Your submission has been received!
Oops! Something went wrong while submitting the form.