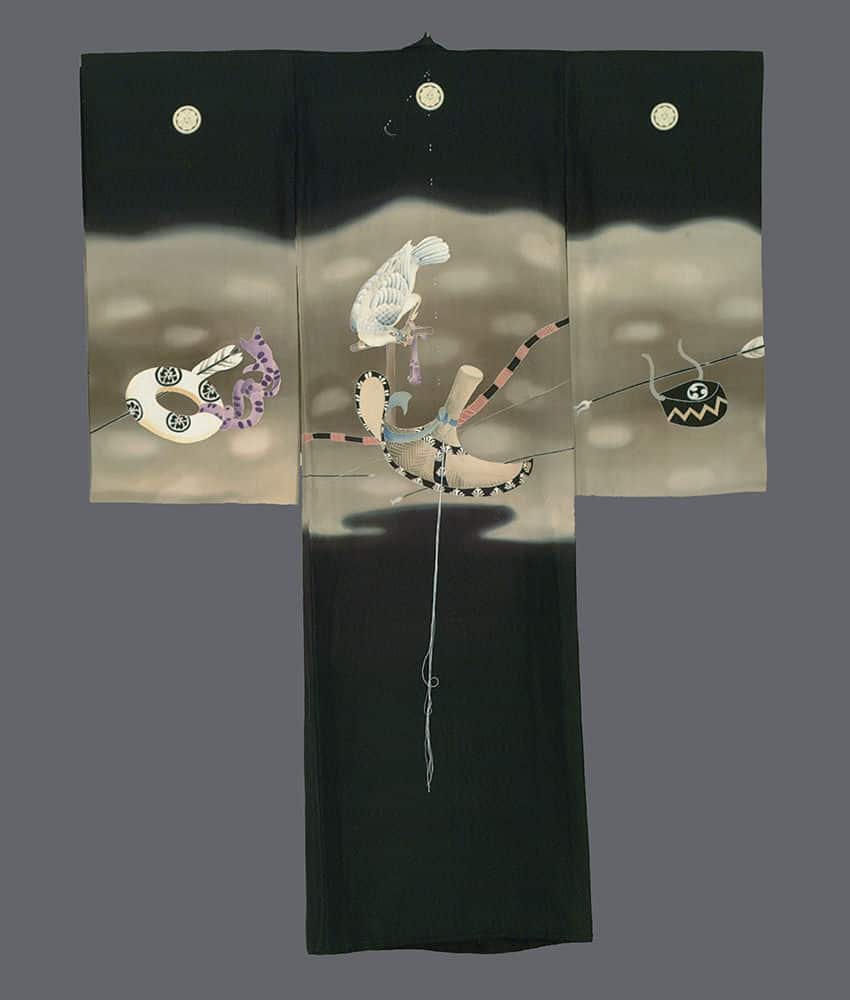 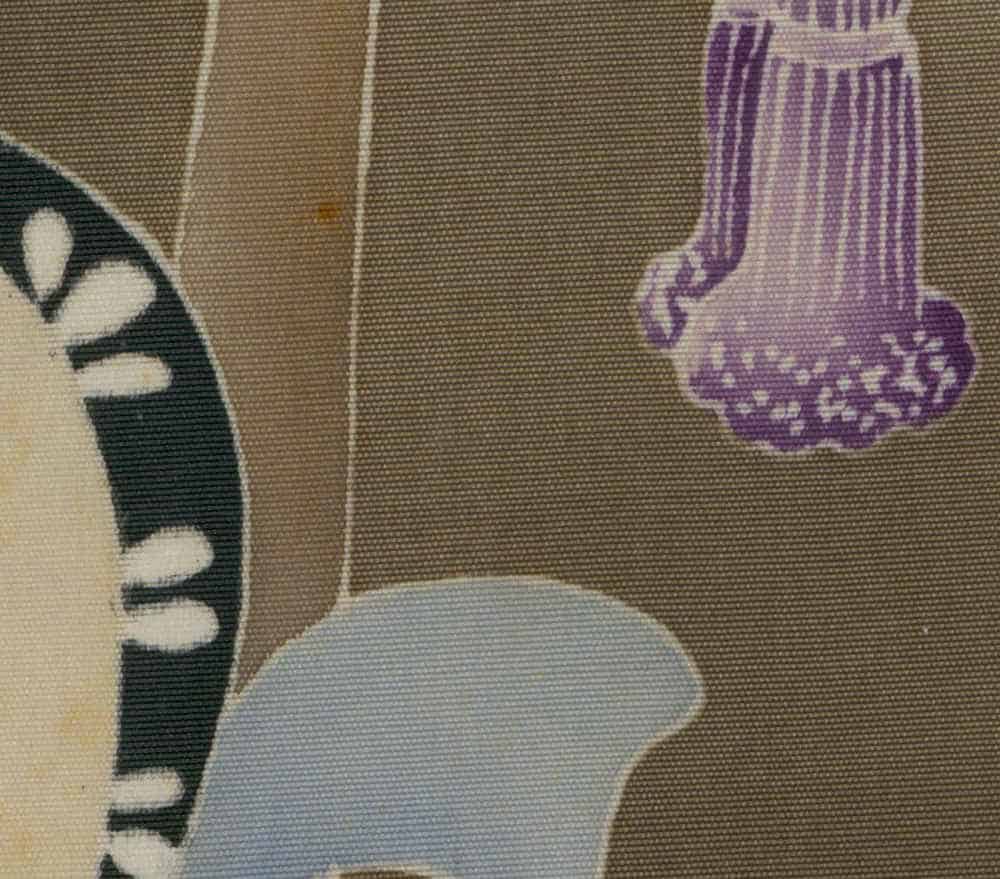 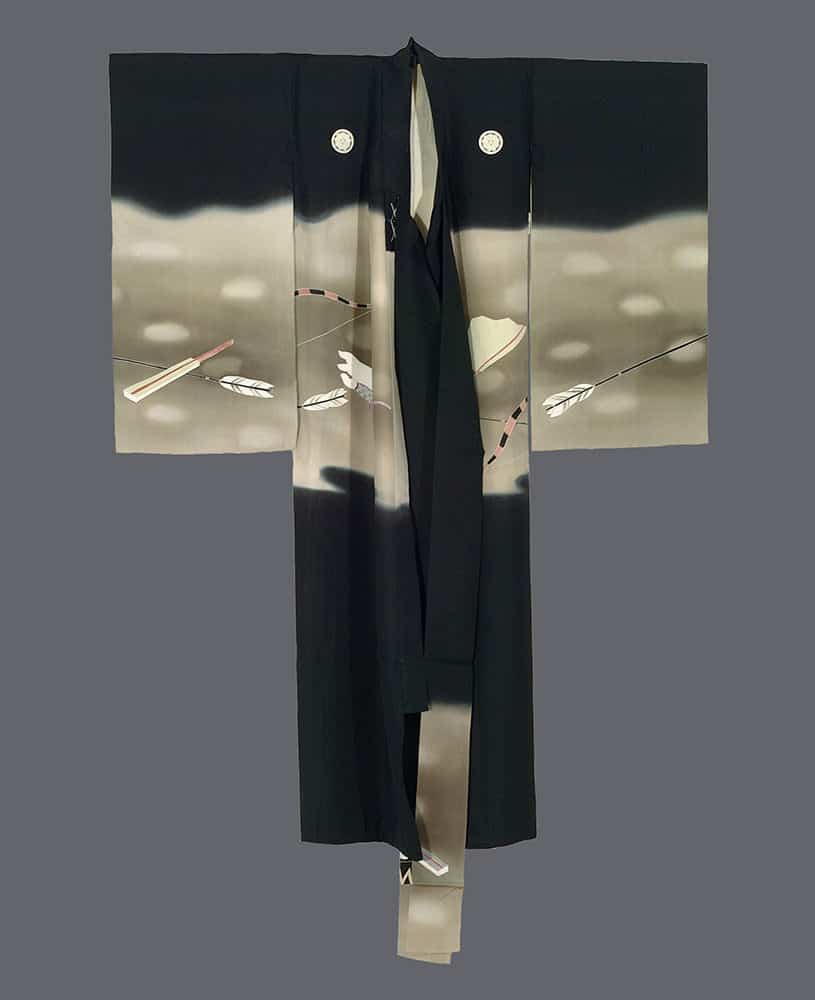 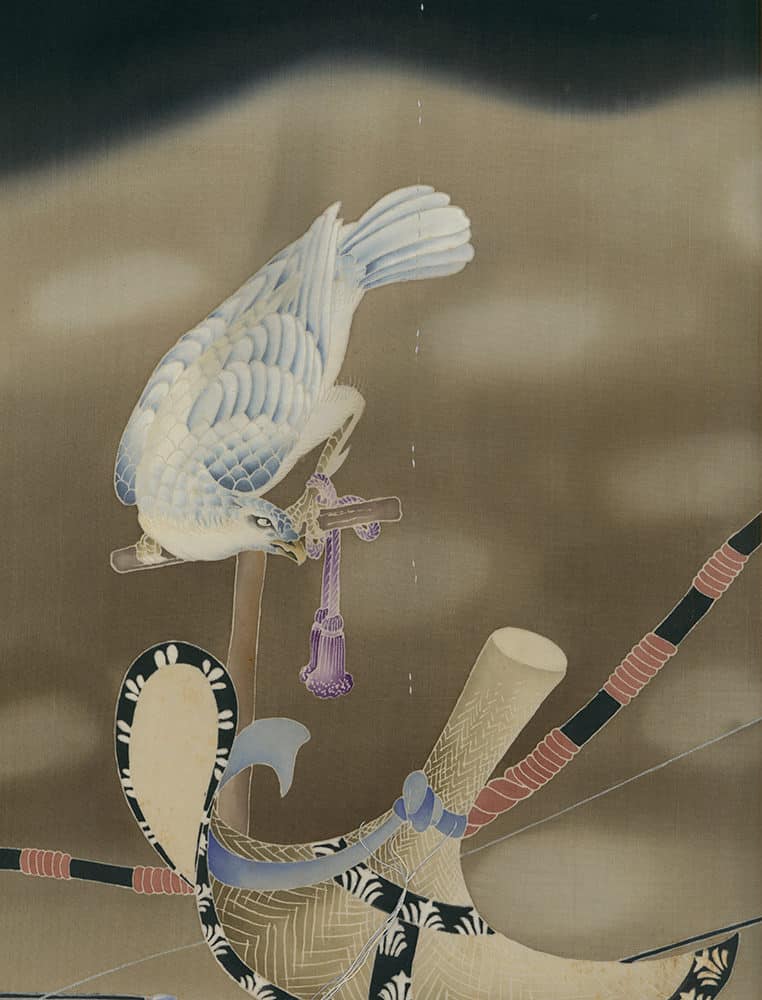 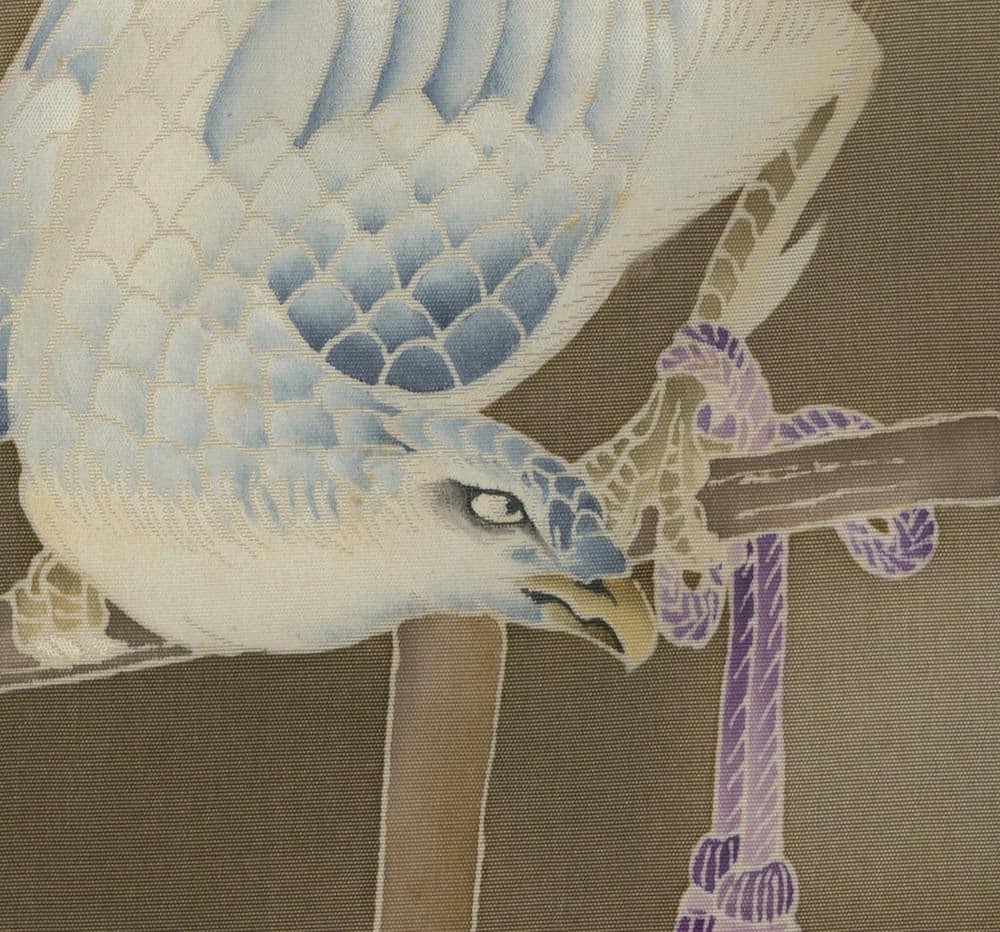 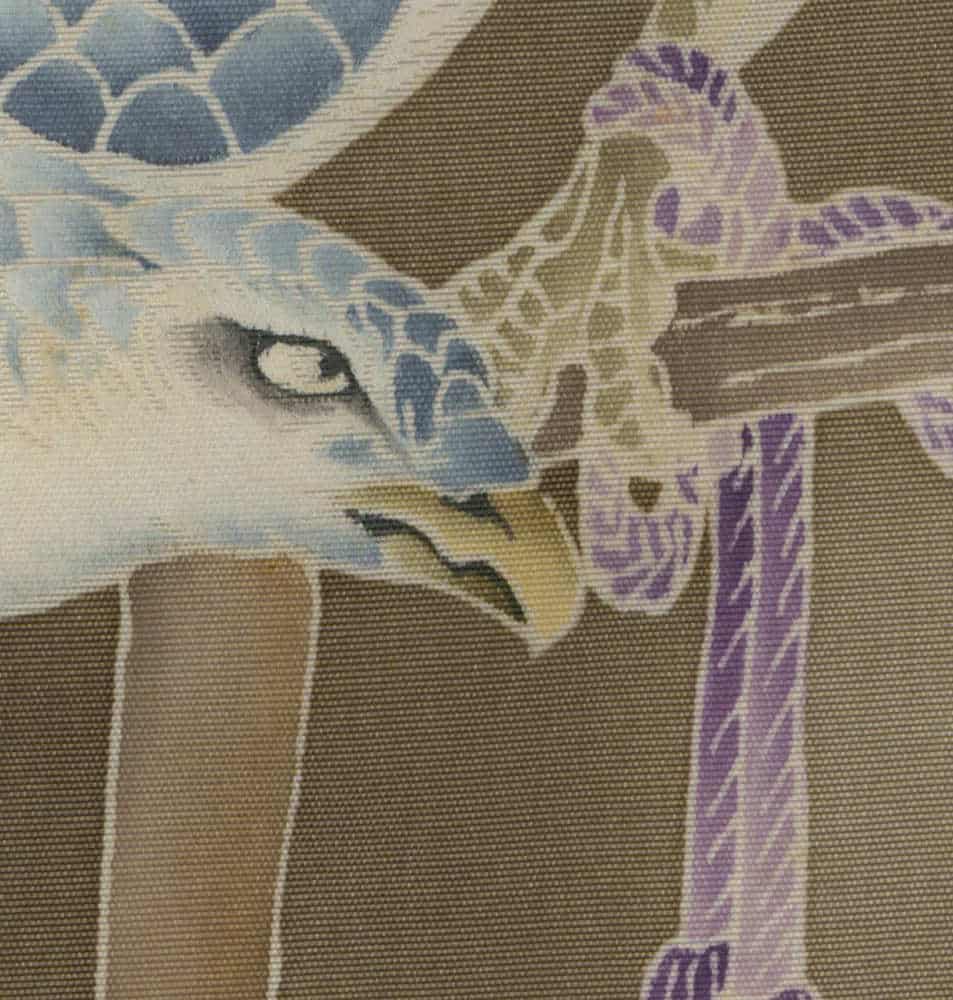 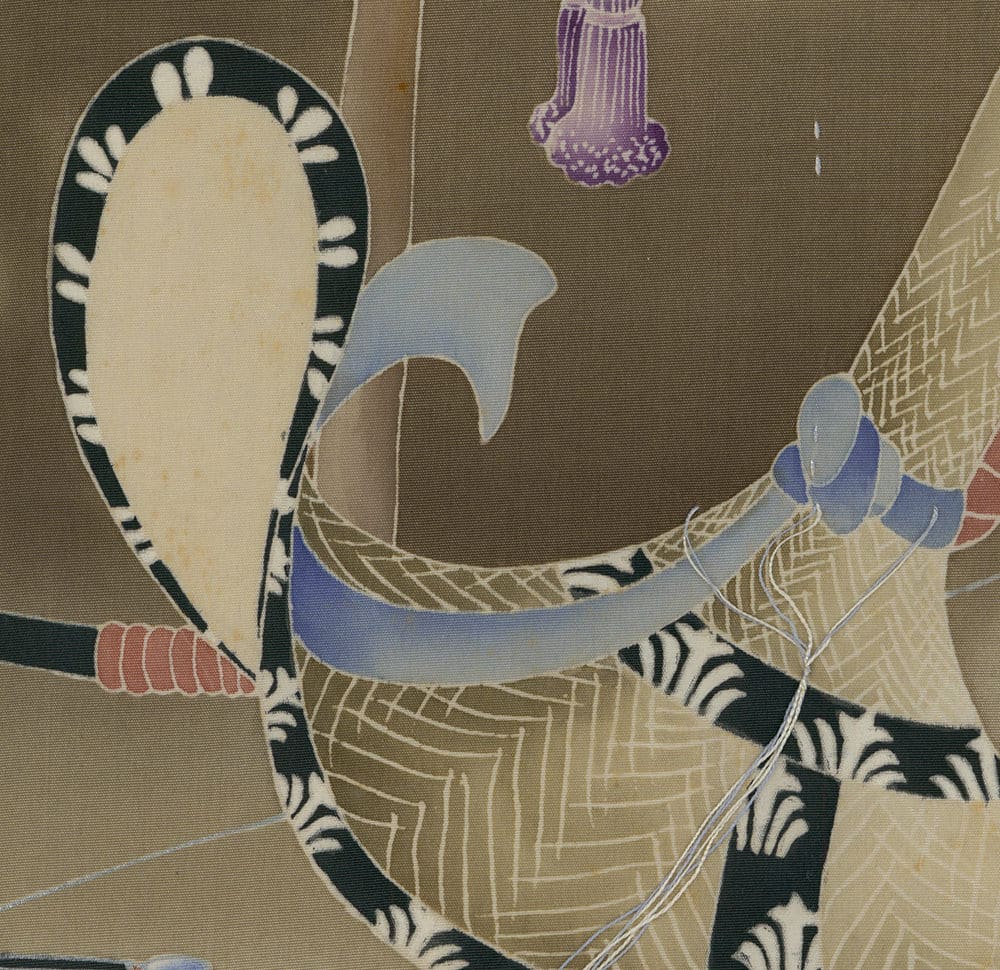 A plain silk miyamairi kimono used for christening a baby boy at a Shinto ceremony, featuring yuzen-painted martial motifs. 33" from sleeve-end to sleeve-end x 44" height. Among the martial themes on this kimono, the one that calls one's attention for it's rarity and prime positioning is the tethered falcon them. Falcons were revered for their ferocity, regal quality, and directness of action, and symbolized the soul of the owner. As the visibility and popularity of falconry grew during the Edo period many falcon-related paintings were commissioned by samurai and other nobility: images of the hunt and especially portraits of favored individual birds depicted tethered to a stand. The long silk embroidery threads hanging down from the upper back of the collar are referred to as 'good luck threads', and are placed there by the boy's mother. They are also referred to as a 'back guard', just as the decorations on the boys kimono included other auspicious symbols to achieve the same objective. The use of these hanging threads was passed down through generations from an old superstition which gave these threads protective powers over the young male wearing them. The tassels (lowest free-hanging threads) "were said to provide a symbolic means for the parents to grasp and safely keep the child from being whisked away by evil forces". The patterns for the stitching down the back also determined whether the kimono was for a boy or for a girl: the straight line of paired dots and stitches, as well as the diagonal line that runs to the left instead of to the right, indicate that it was destined for a boy.Another group of hand-sewn protective symbols appear on the front of the kimono, where the front ties meet the forward edge. They range from very simple in design to very elaborate. All of them, however, serve the same purpose: a parent's desire to provide an all-enveloping protective wrap for their son. In a time and age when children often died young, all sources for the placement of good luck talisman were utilized.

Price:
$
12,000.00
US
Available: Inquire
GalleryOrderingContactAbout UsGallery StatementNewsGlossary
Copyright © 2023 Yorke Antique Textiles
Thank you! Your submission has been received!
Oops! Something went wrong while submitting the form.