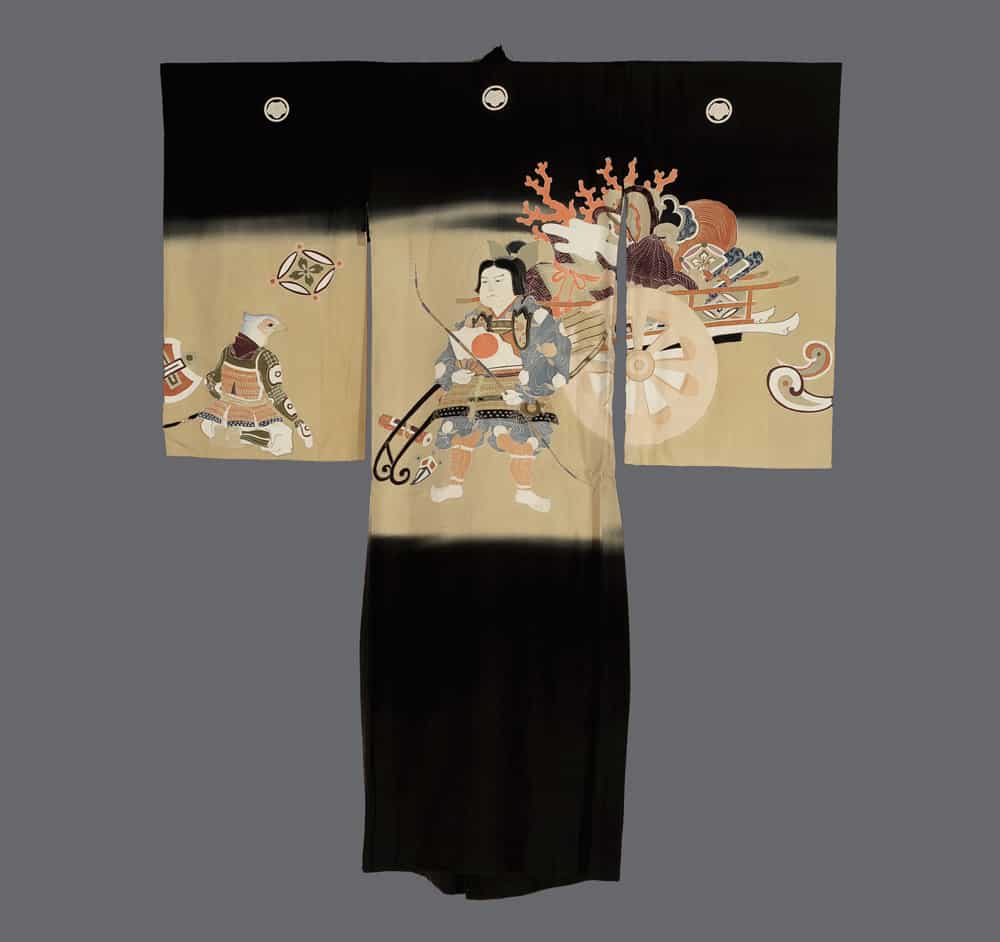 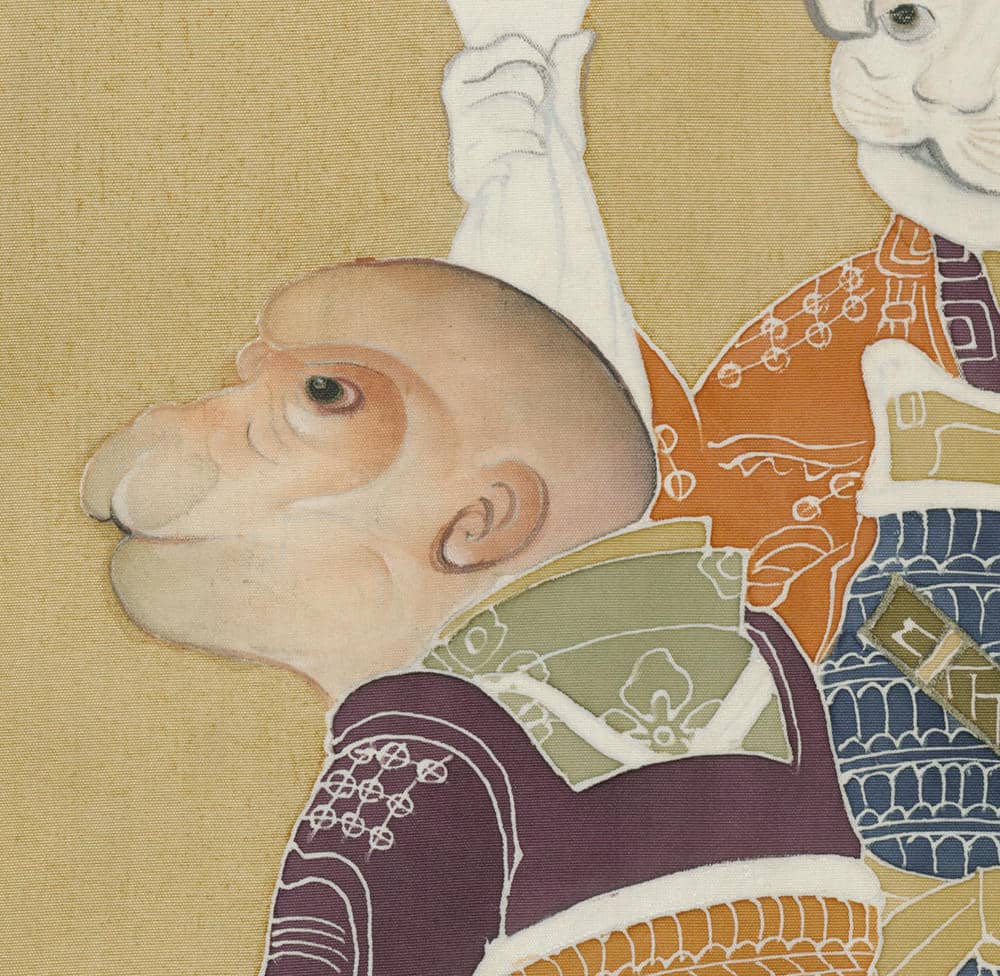 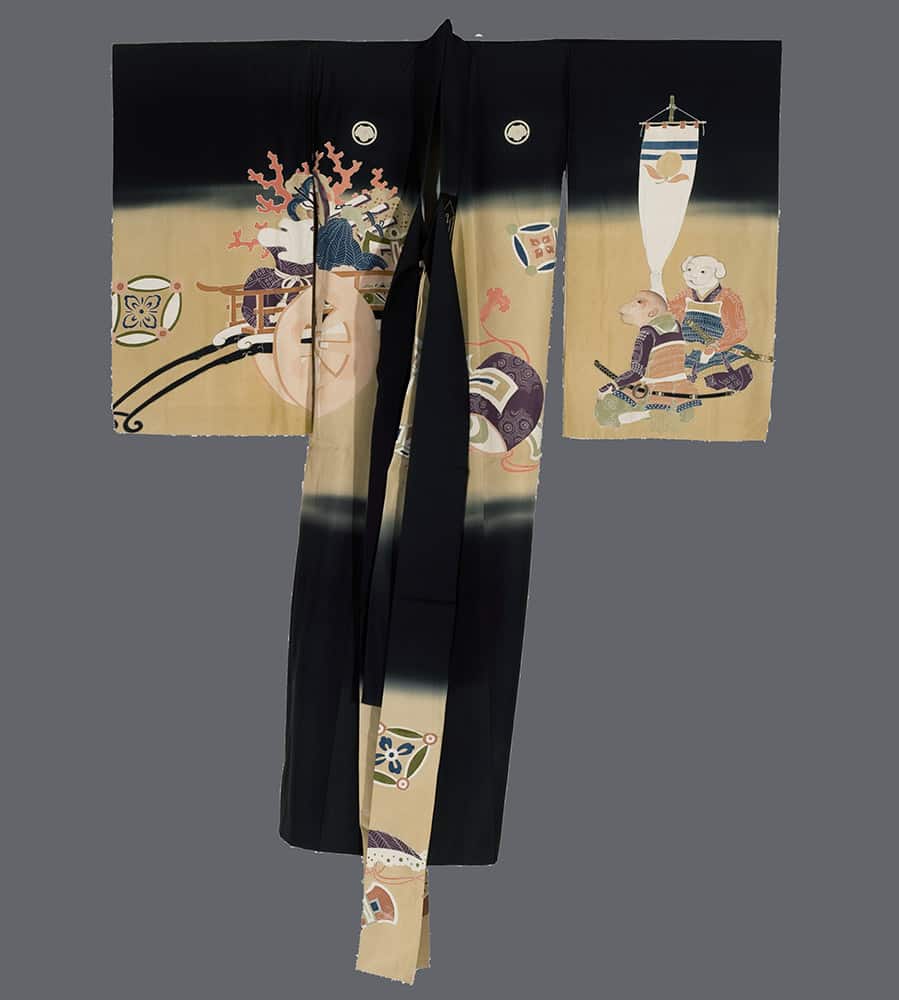 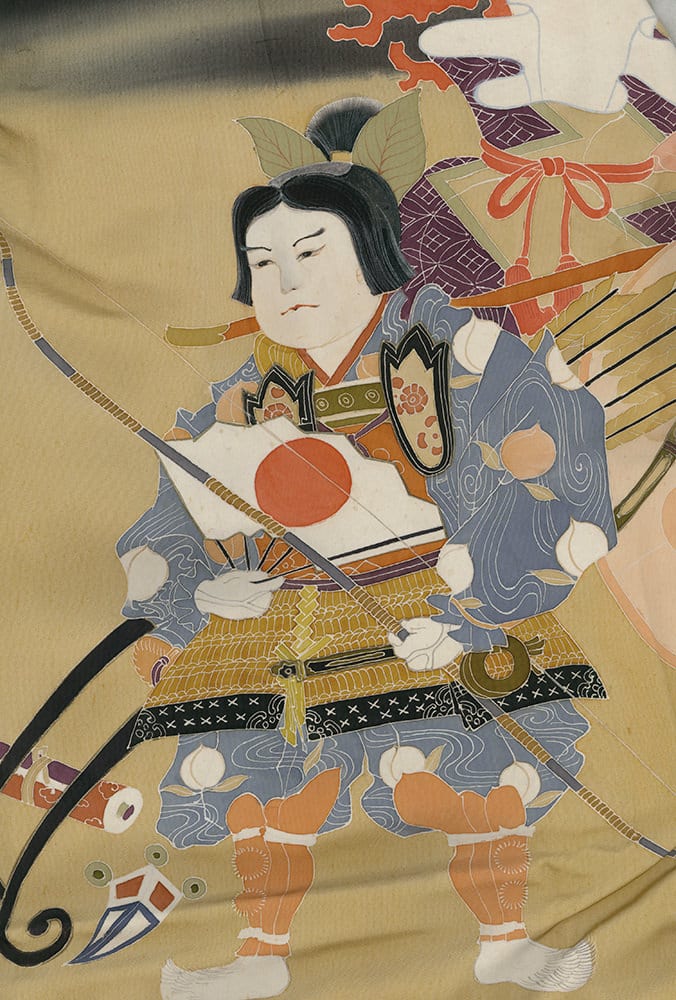 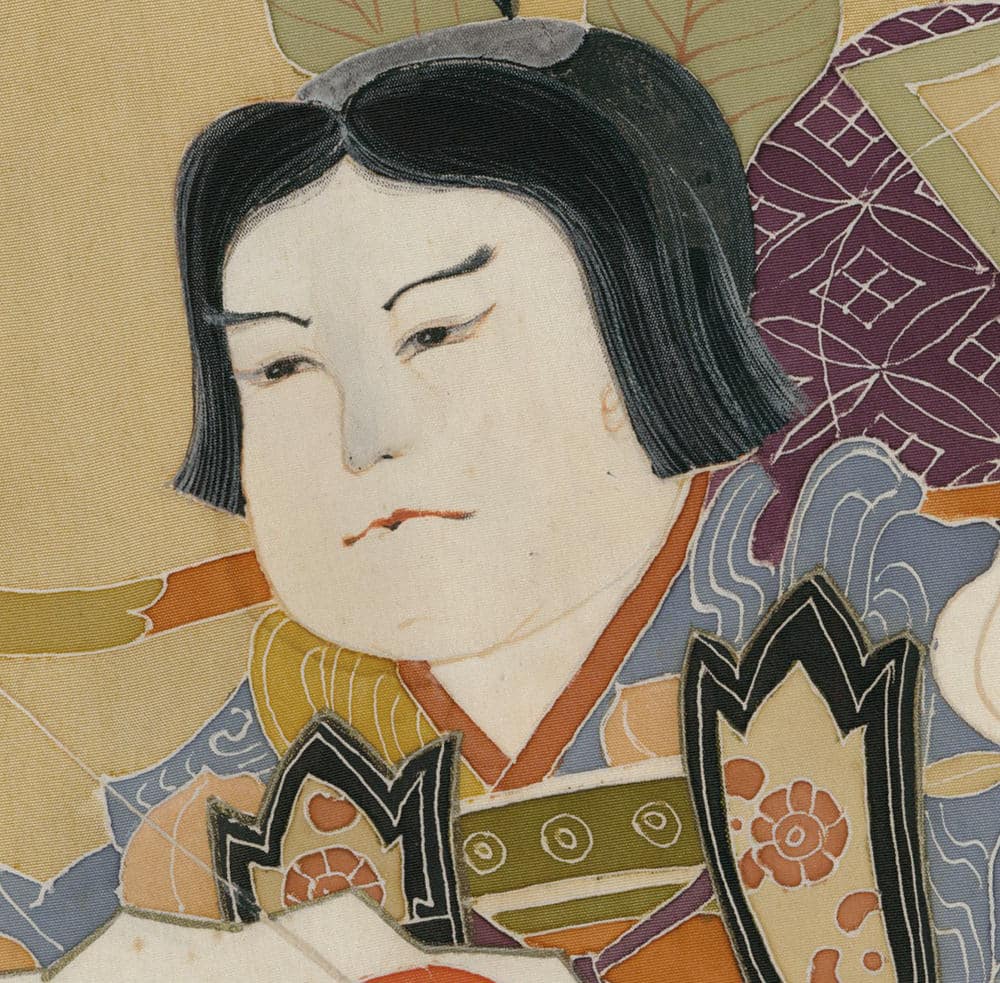 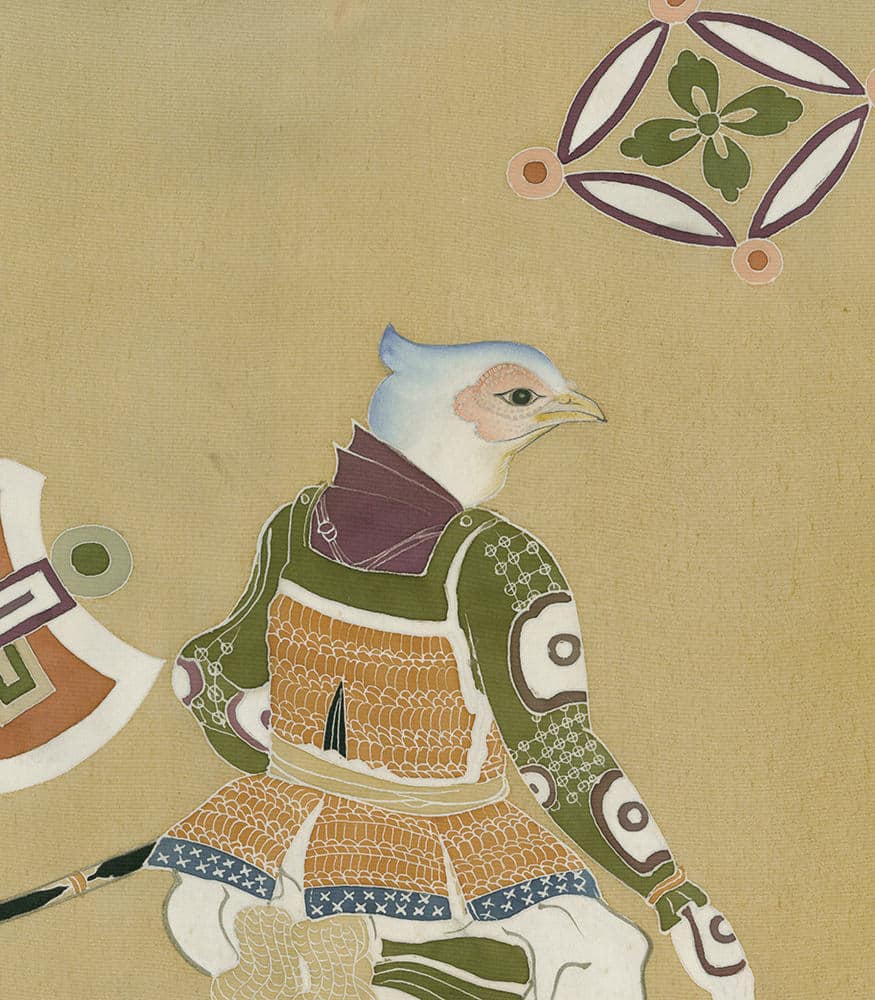 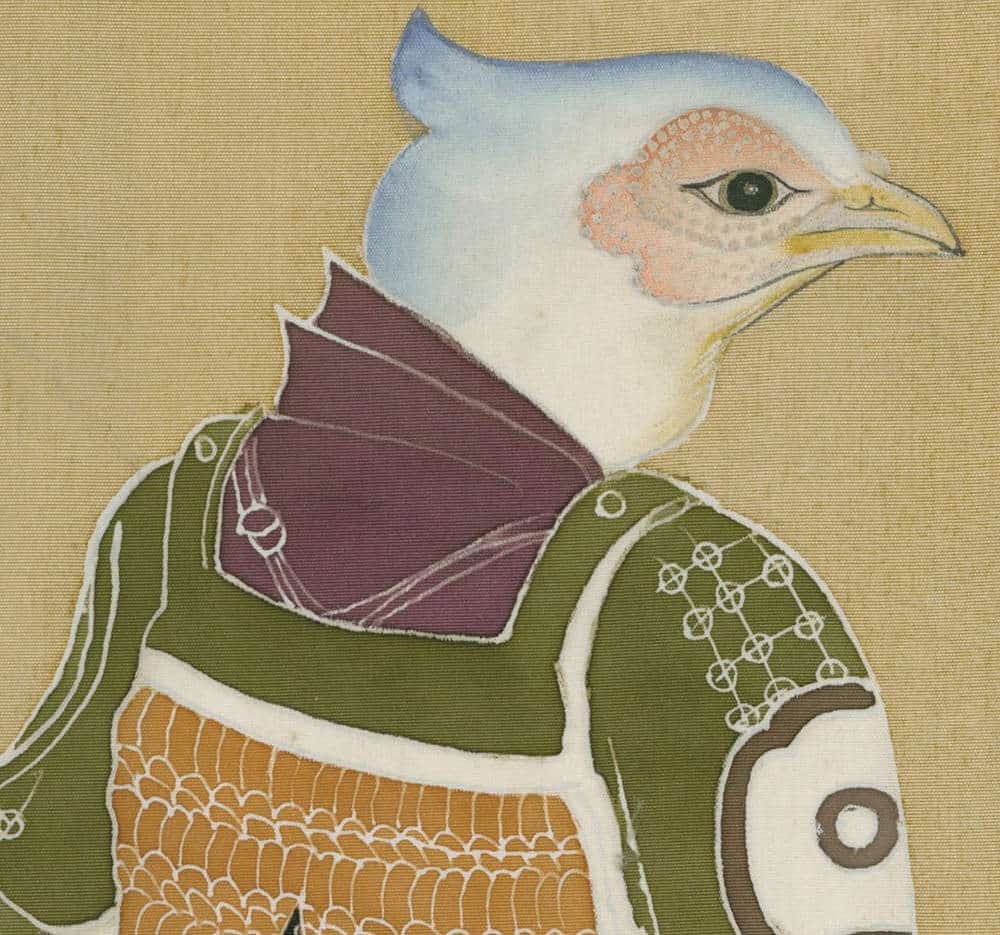 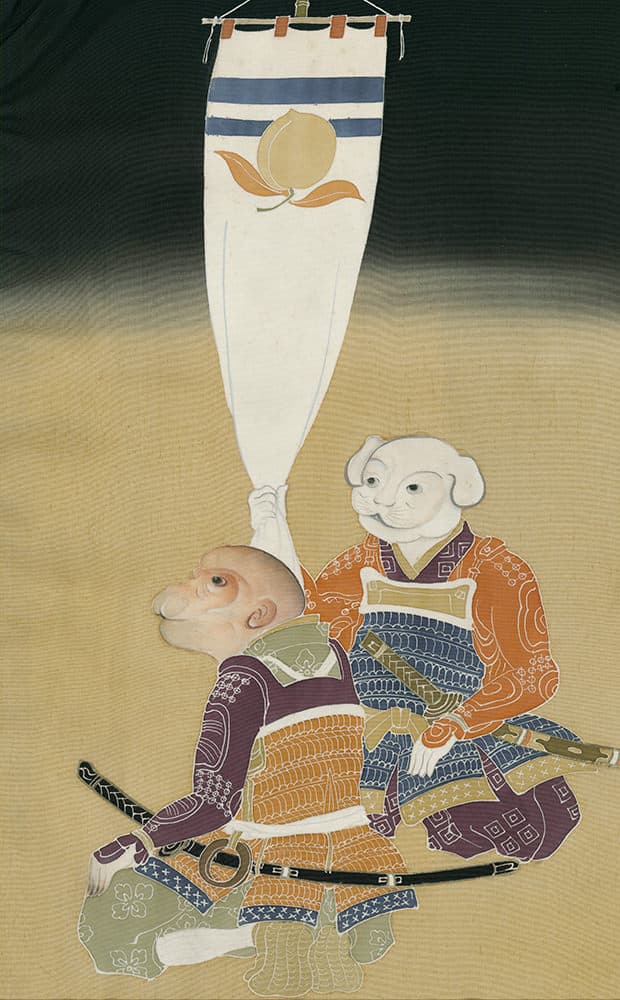 A plain silk miyamairi boys kimono created as the main accessory during the child's ceremonial anointment at a Shinto shrine. This kimono features yuzen-dyed depictions of the folk-legend Momotaro and his animal companions. Minor stains. 36" from sleeve-end to sleeve-end x 42" height. Momotaro, or 'peach boy', is legendary in Japan, but not very often are he and his companions depicted with such detail as on this garment. Following is a short and succinct version of this legend take from the http://www.pref.okayama.jp website: "Once upon a time there lived an old man an old woman in the country of Okayama. The old man went everyday into the mountains to cut wood, while his wife would go to the river to wash clothes. One day, while the old woman was down at the river washing clothes, a big peach came floating down the river! It looked so delicious, she decided to take it home for her and her husband to eat. When the old man came back to their home, the old woman cut the peach open, and to their surprise, there was a small boy inside! They decided to call him Momotaro, which means 'peach boy'.The old couple raised Momotaro to be big and strong. One day, he decided to go and defeat the ogres living on Ogre Island that were pillaging the land. The old woman fixed him some delicious millet dumplings, known as kibi-dango, for his long journey to the island. On the way, a monkey, a dog, and a pheasant joined him, giving them a dumpling each in return for their help in fighting the ogres.Upon reaching the Ogre Island, Momotaro and his companions found that the gate was locked to the Ogre's fort. The pheasant flew inside, and grabbed a key to let the others in. Once inside, they fought the evil ogres. The pheasant pecked their eyes, the dog bit their legs and the monkey jumped on their backs, clawing at the beasts. Finally, the ogres cried for mercy! They gave the strong Momotaro all of their treasure, and he returned to his village triumphantly. Momotaro and the old couple lived happily ever after."

Price:
$
3,500.00
US
Available: Inquire
GalleryOrderingContactAbout UsGallery StatementNewsGlossary
Copyright © 2023 Yorke Antique Textiles
Thank you! Your submission has been received!
Oops! Something went wrong while submitting the form.