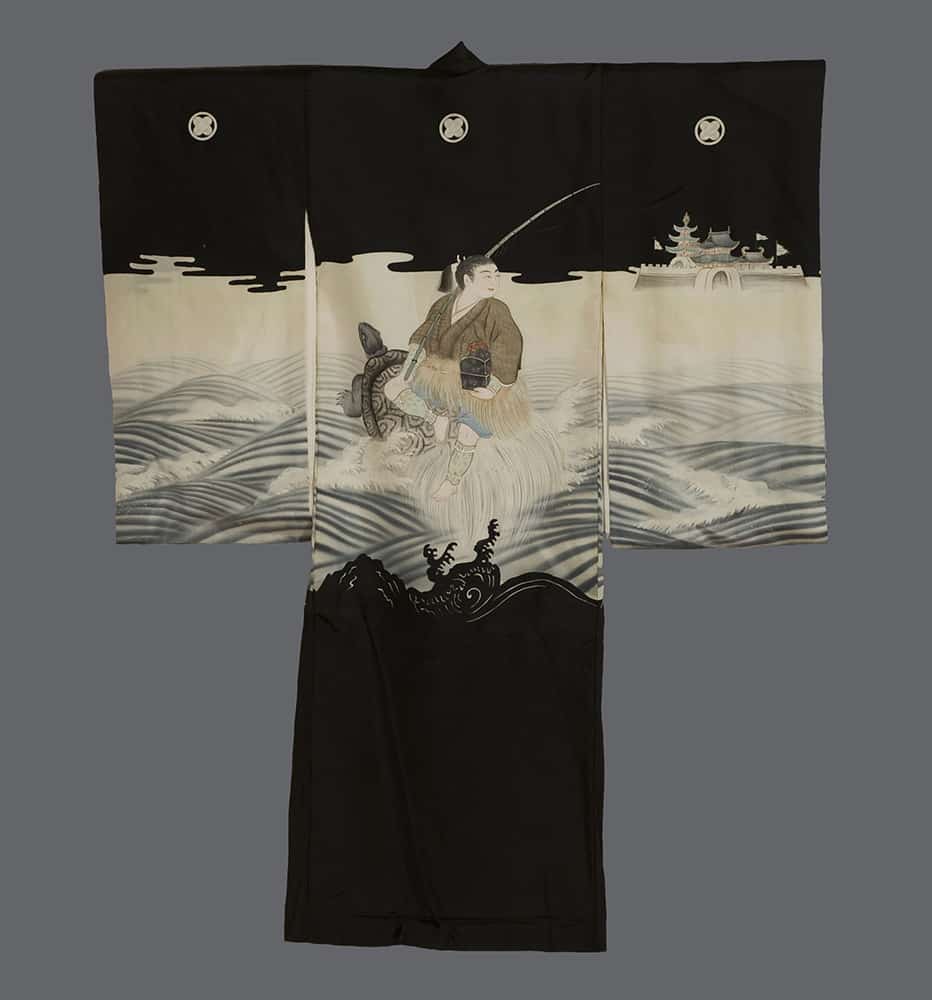 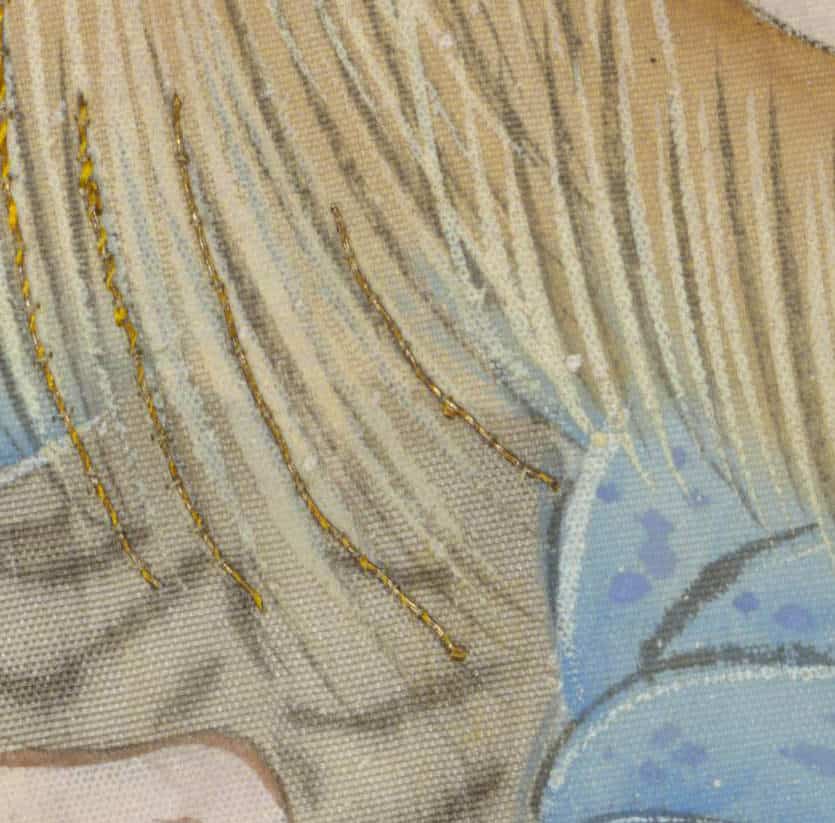 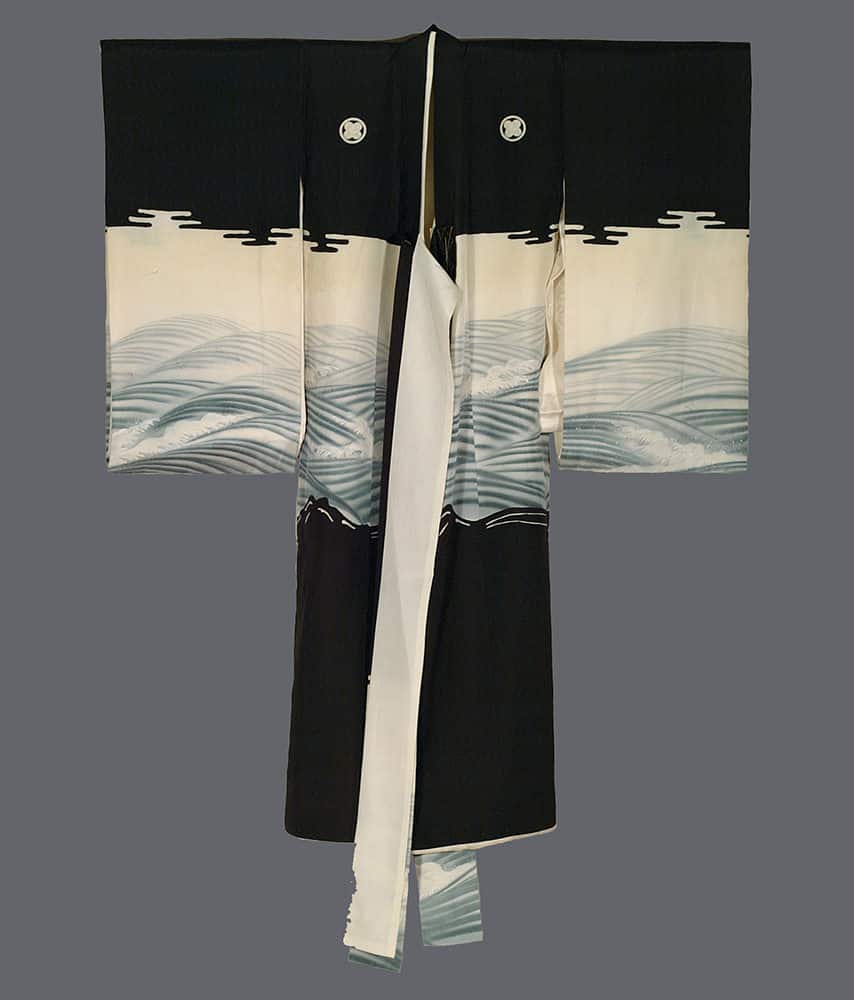 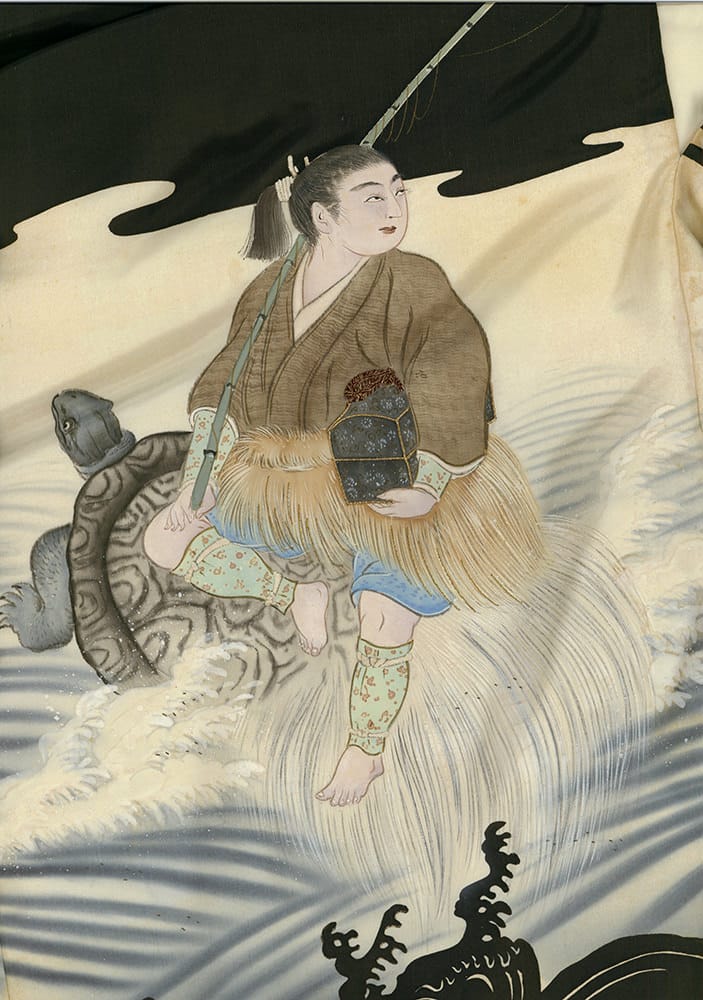 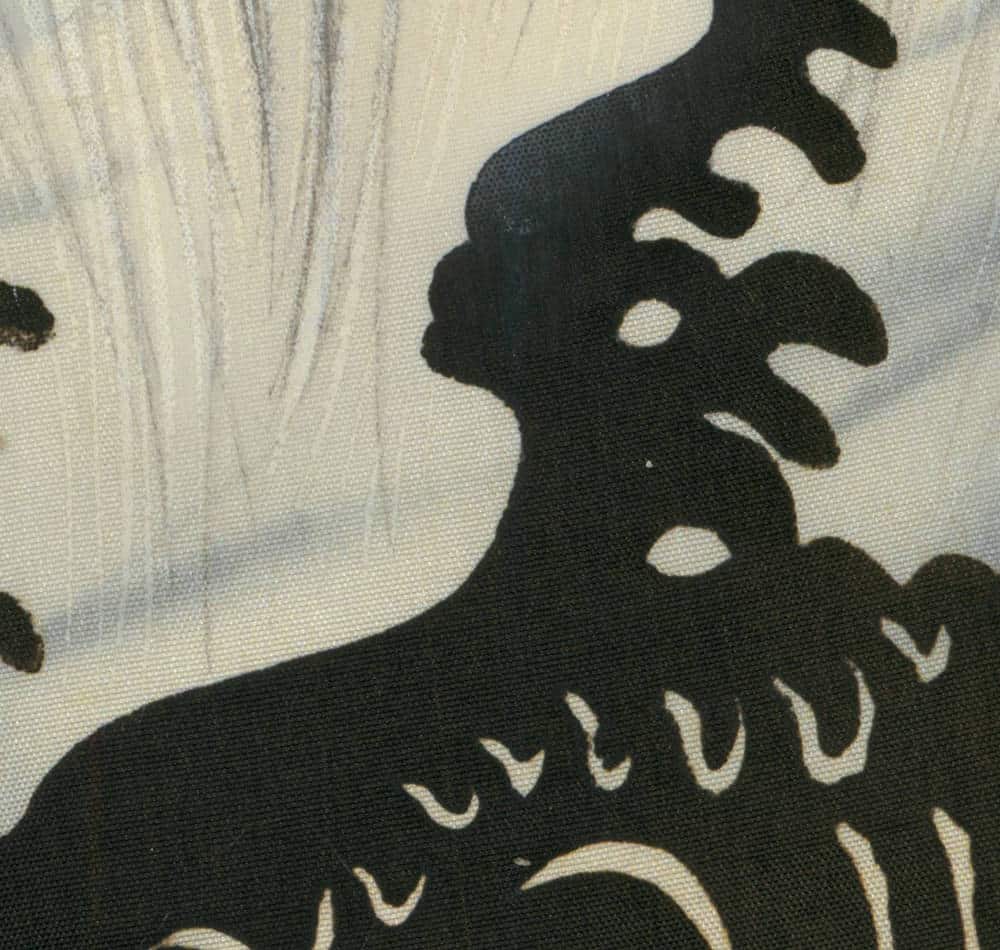 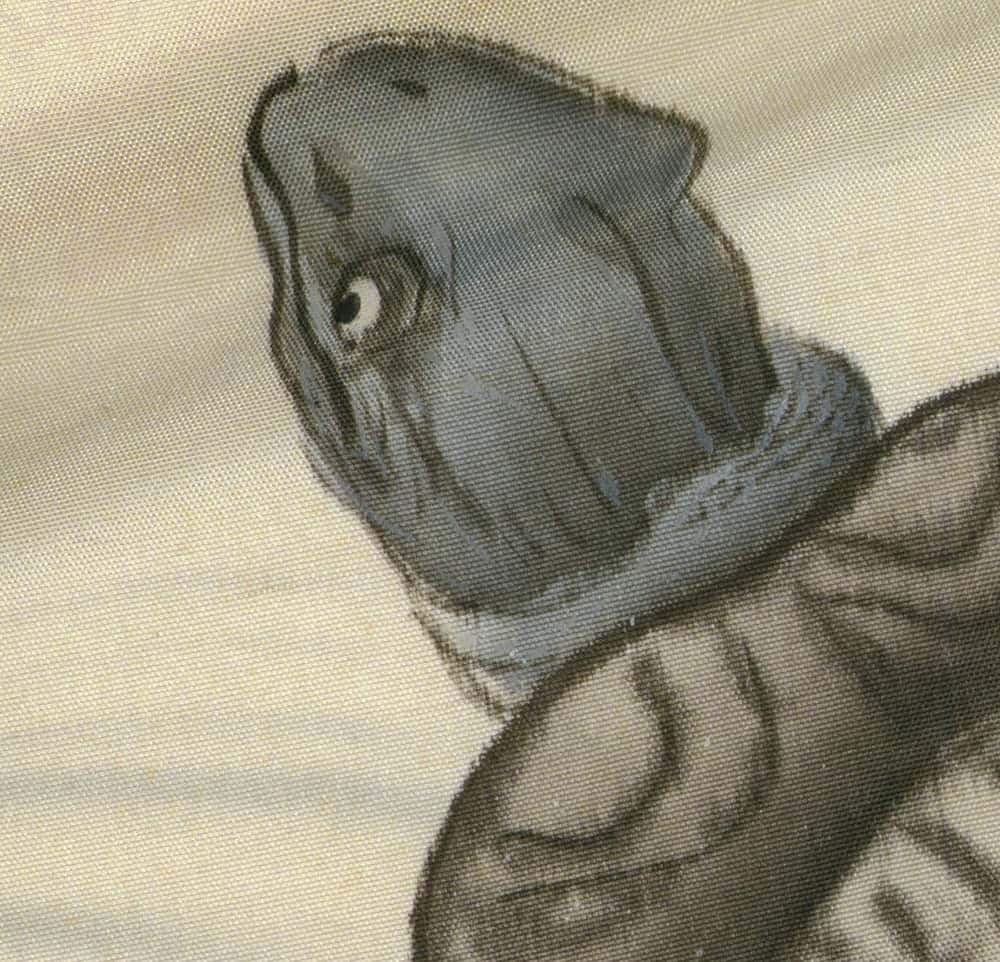 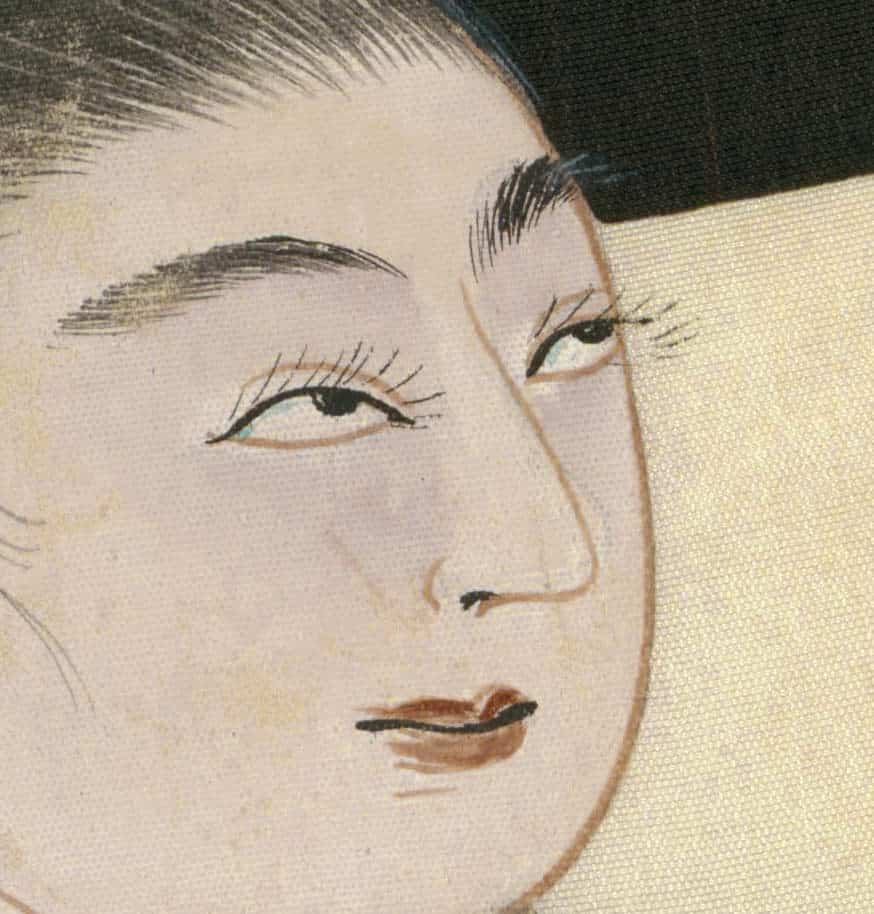 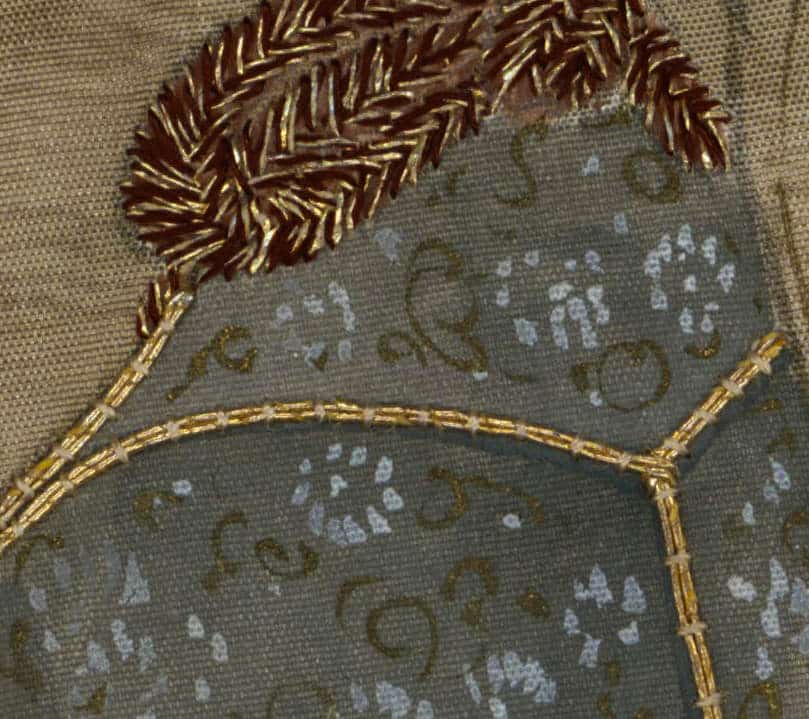 A fine plain silk ceremonial miyamairi kimono for a boy's initiation at a Shinto shrine, featuring yuzen-dyed motifs of Urashima Taro leaving the Ryugujyo underwater palace. Painting and couching embroidery highlights. 33" from sleeve-end to sleeve-end x 40" height. Following is the famous folktale taken from Wikipedia. "One day a young fisherman named Urashima Taro is fishing when he notices a group of children torturing a small turtle. Taro saves it and lets it to go back to the sea. The next day, a huge turtle approaches him and tells him that the small turtle he had saved is the daughter of the Emperor of the Sea, Ryujin, who wants to see him to thank him. The turtle magically gives Tar? gills and brings him to the bottom of the sea, to the Palace of the Dragon God (Ryugujo). There he meets the Emperor and the small turtle, who was now a lovely princess, Otohime. Taro stays there with her for a few days, but soon wants to go back to his village and see his aging mother, so he asks Otohime permission to leave. The princess says she is sorry to see him go, but wishes him well and gives him a mysterious box called tamatebako which will protect him from harm but which she tells him never to open. Taro grabs the box, jumps on the back of the same turtle that had brought him there, and soon is at the seashore.When he goes home, everything has changed. His home is gone, his mother has vanished, and the people he knew are nowhere to be seen. He asks if anybody knows a man called Urashima Taro. They answer that they had heard someone of that name had vanished at sea long ago. He discovers that 300 years have passed since the day he left for the bottom of the sea. Struck by grief, he absent-mindedly opens the box the princess had given him, from which bursts forth a cloud of white smoke. He is suddenly aged, his beard long and white, and his back bent. From the sea comes the sad, sweet voice of the princess: "I told you not to open that box. In it was your old age ..."