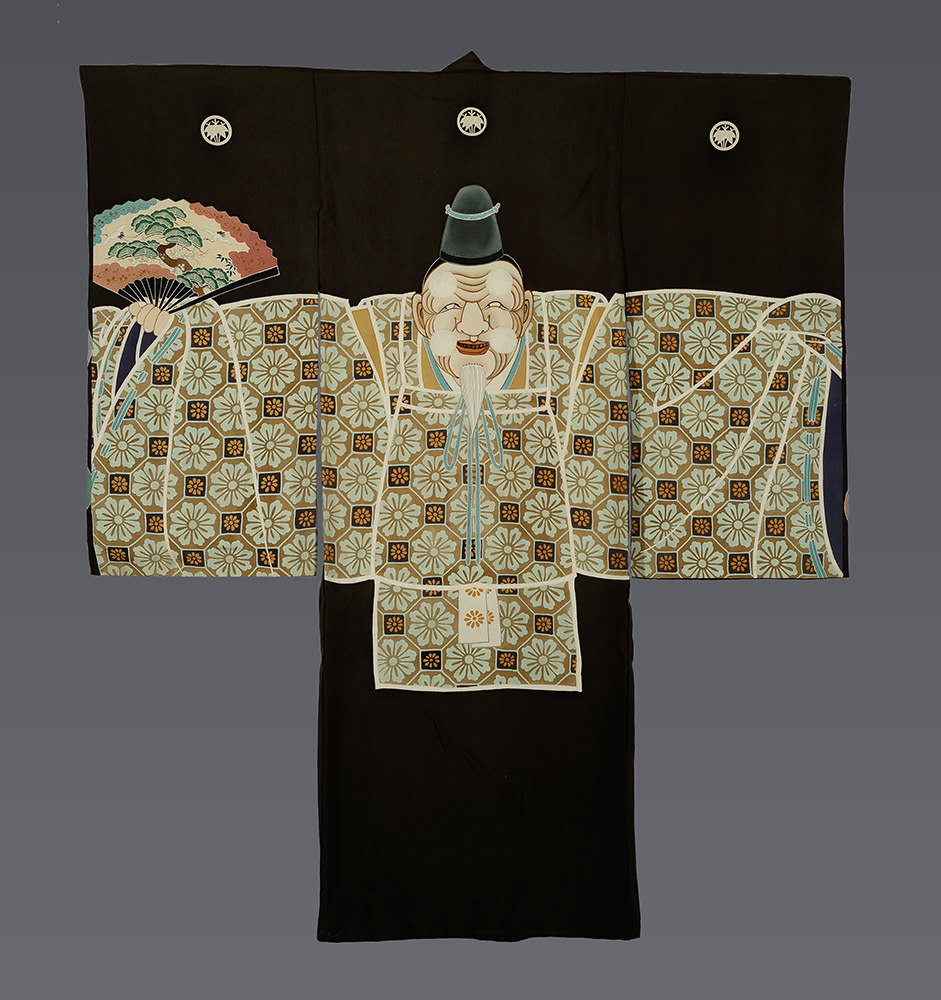 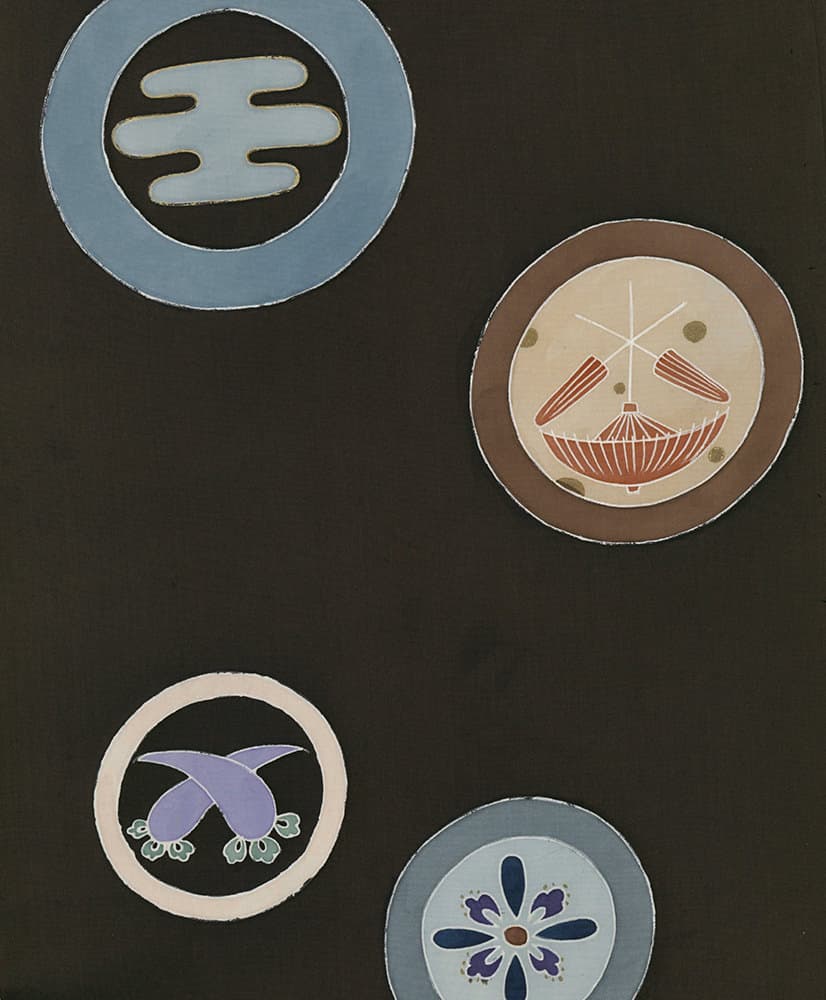 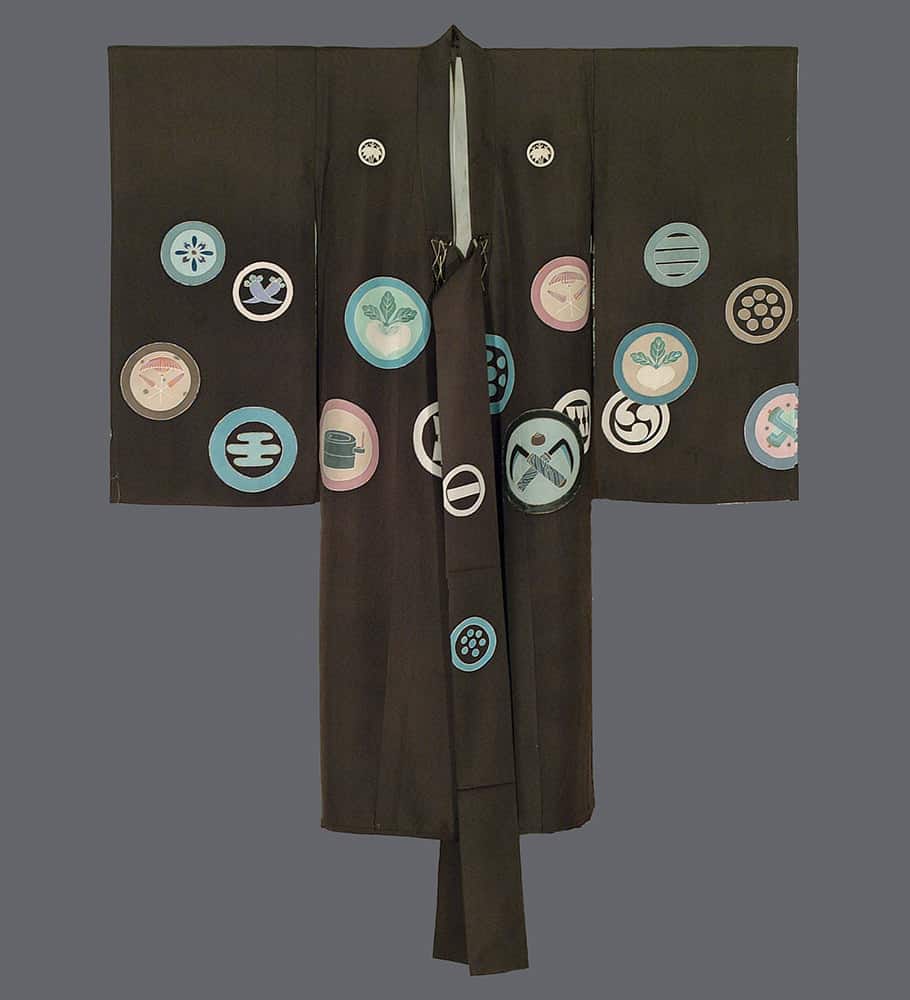 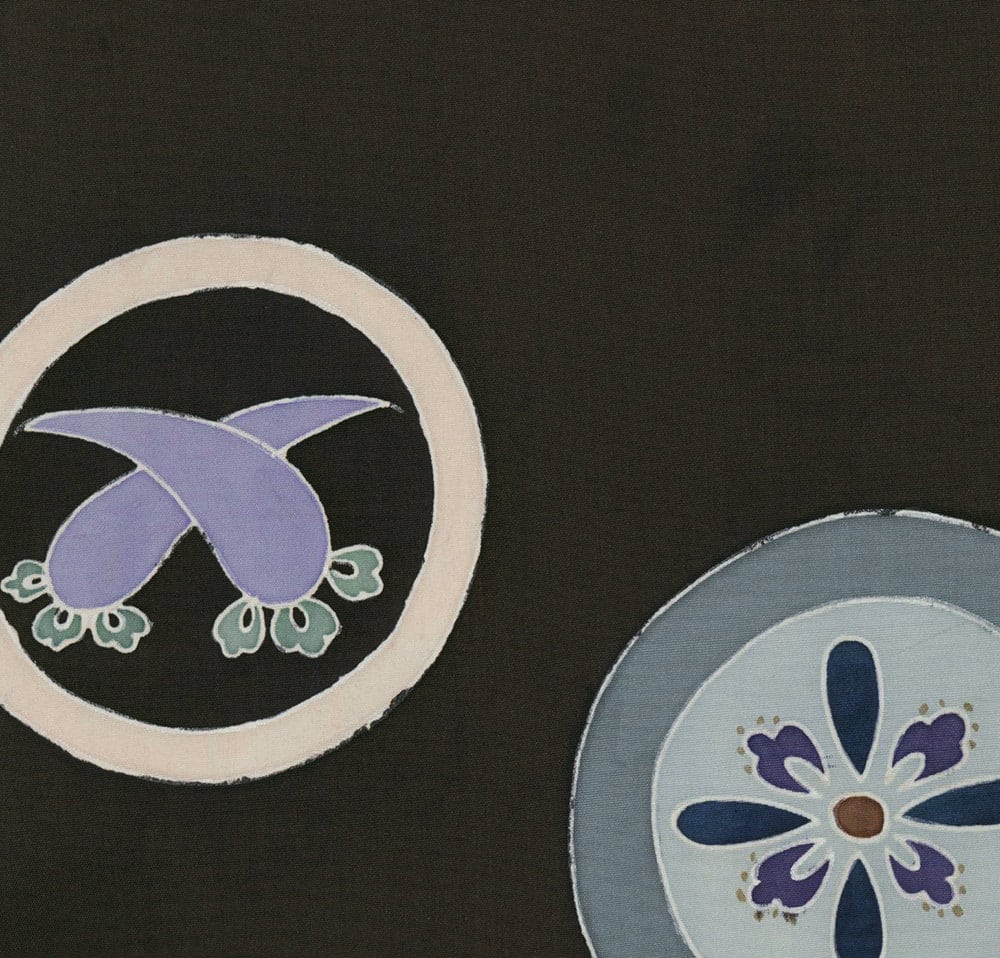 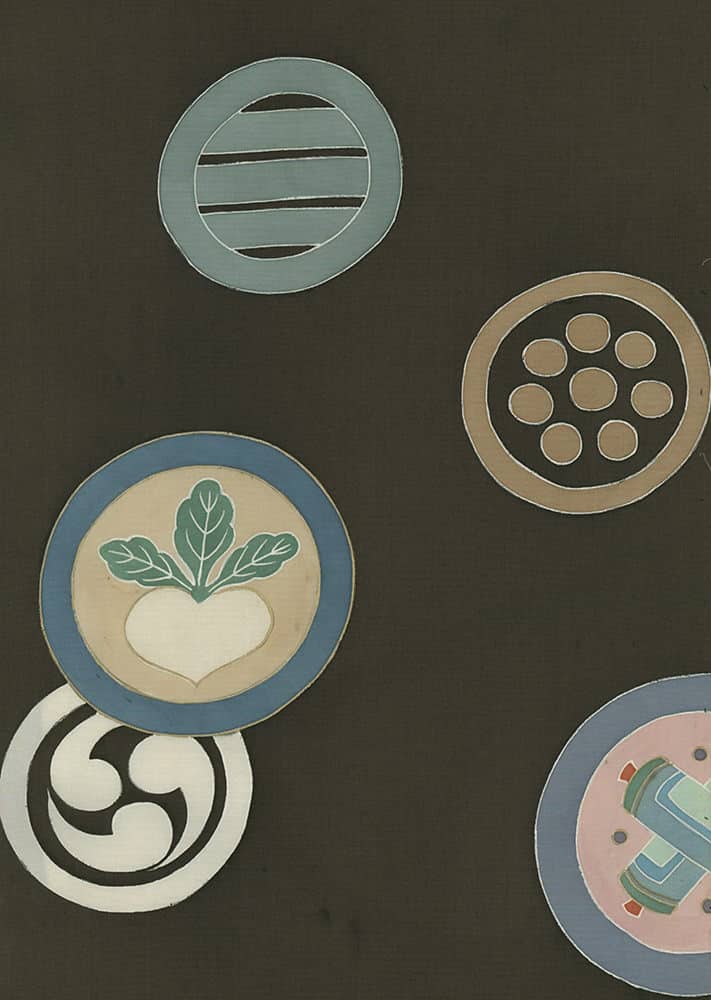 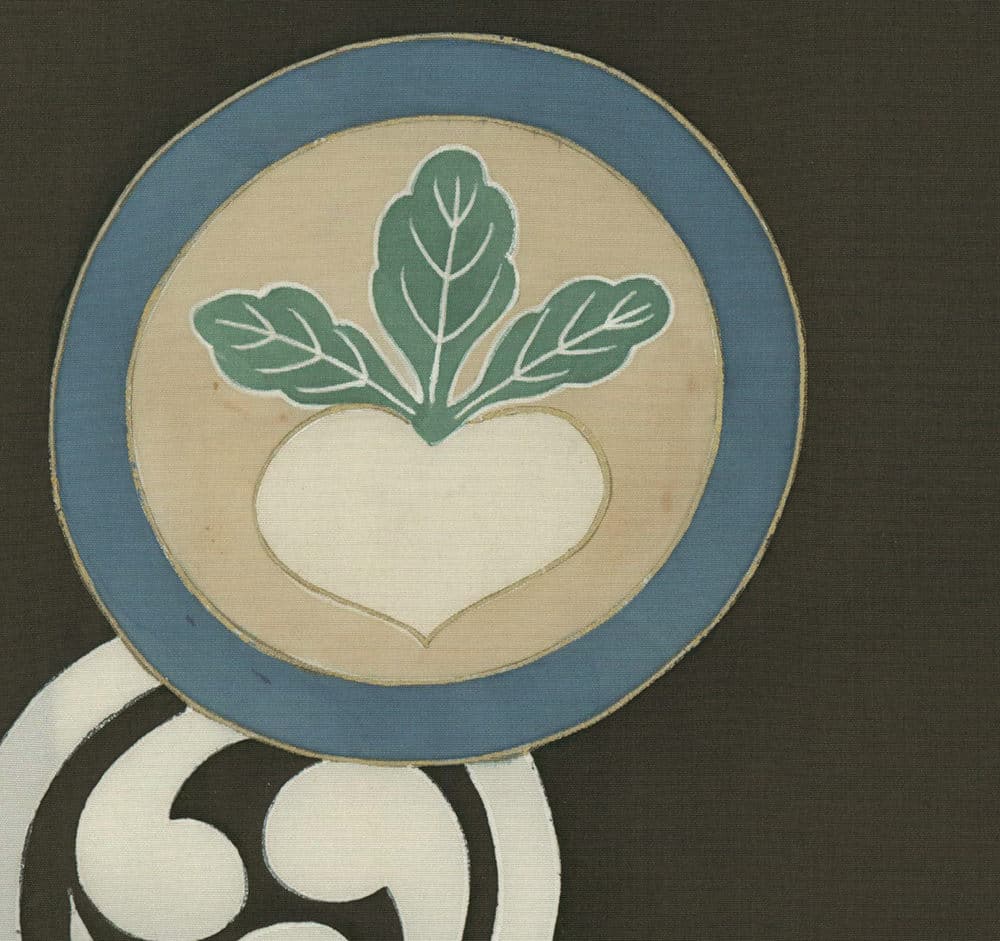 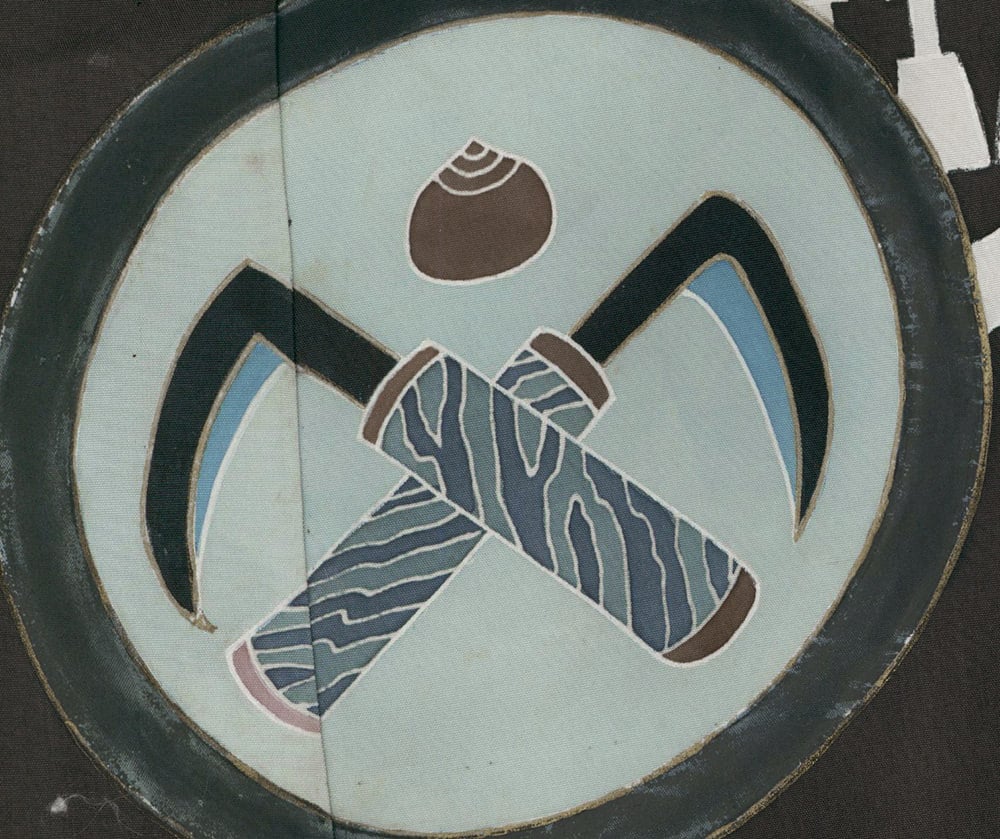 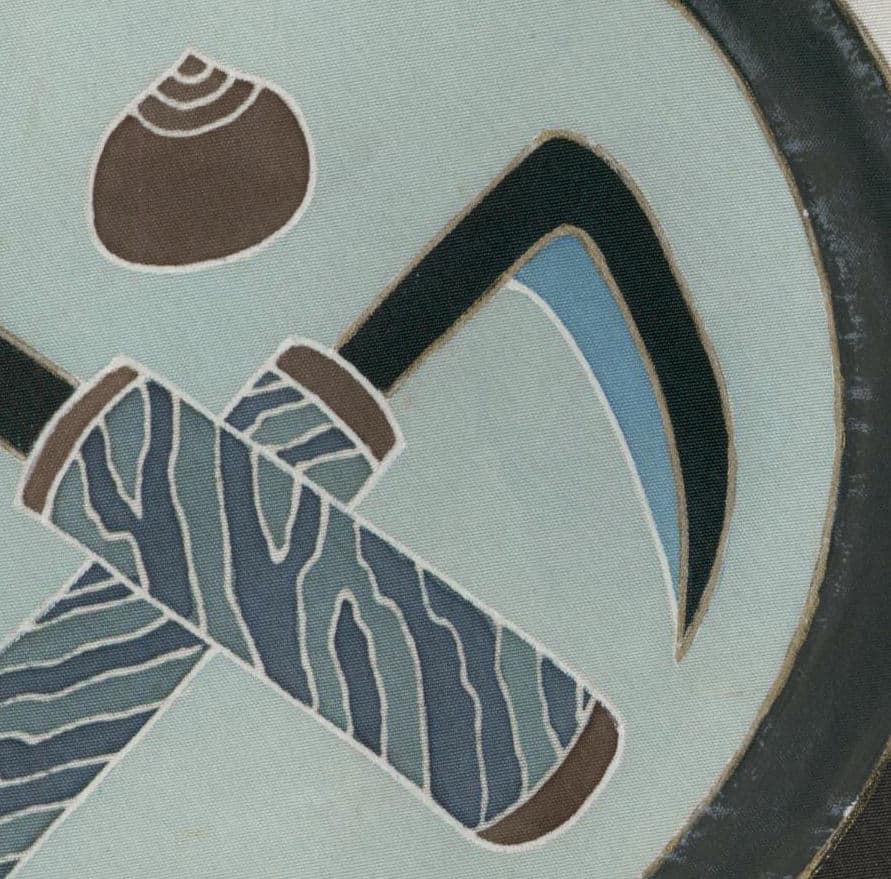 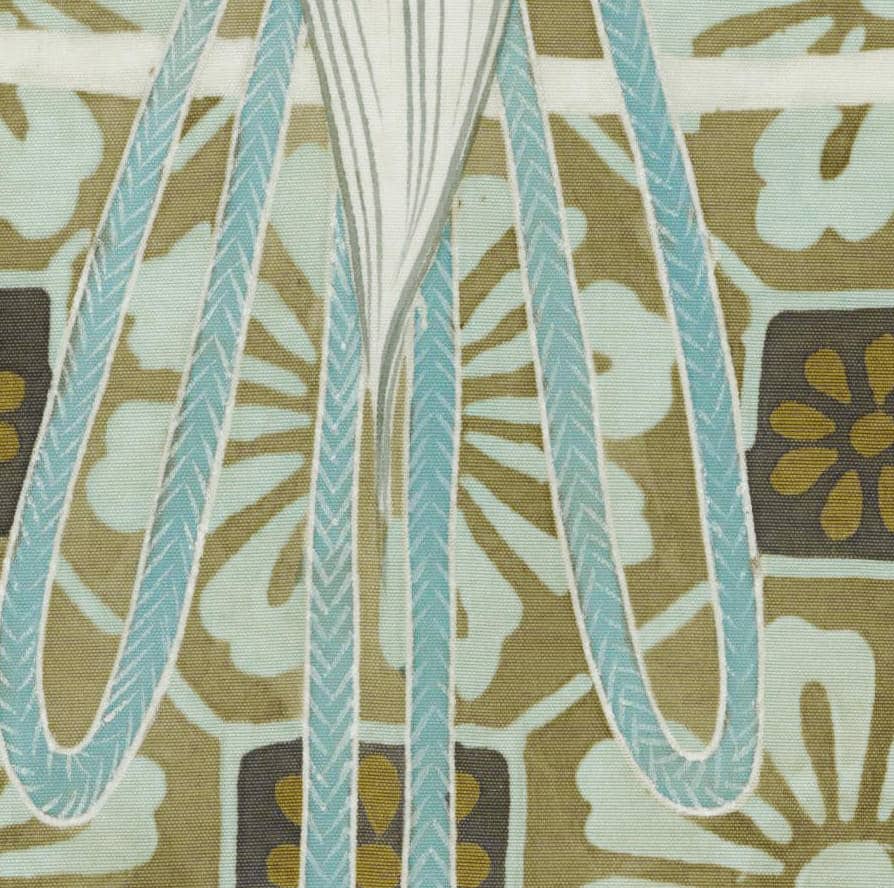 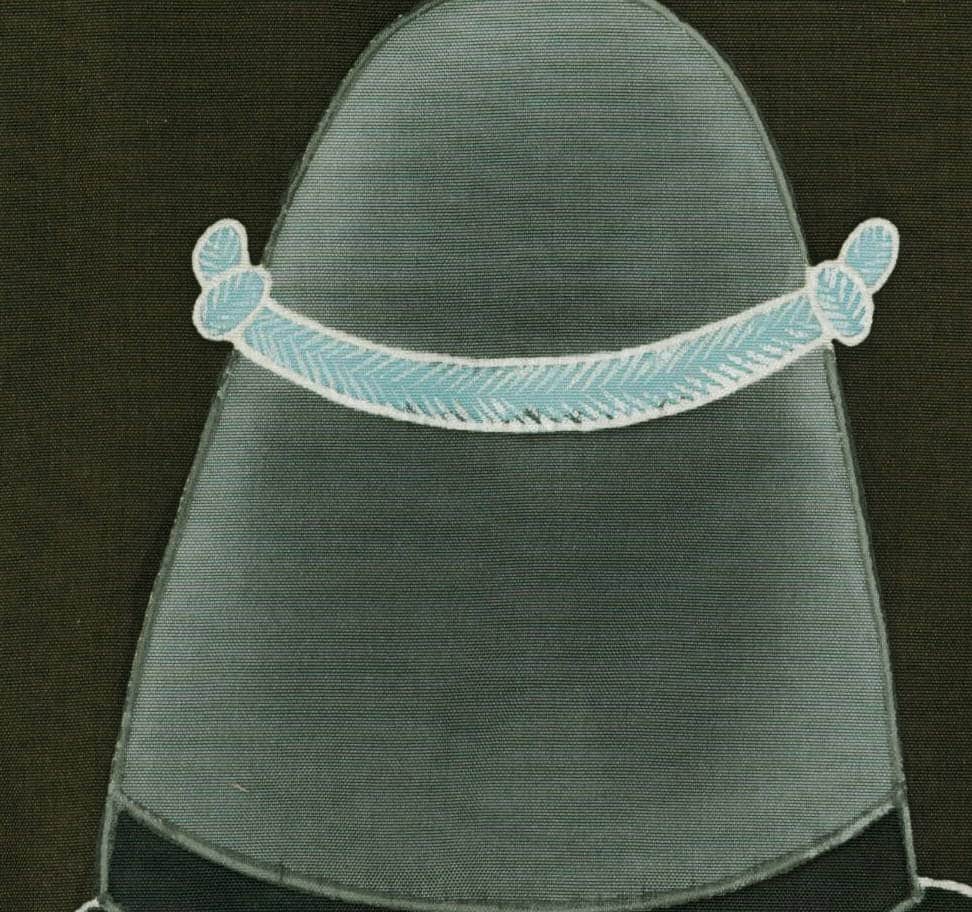 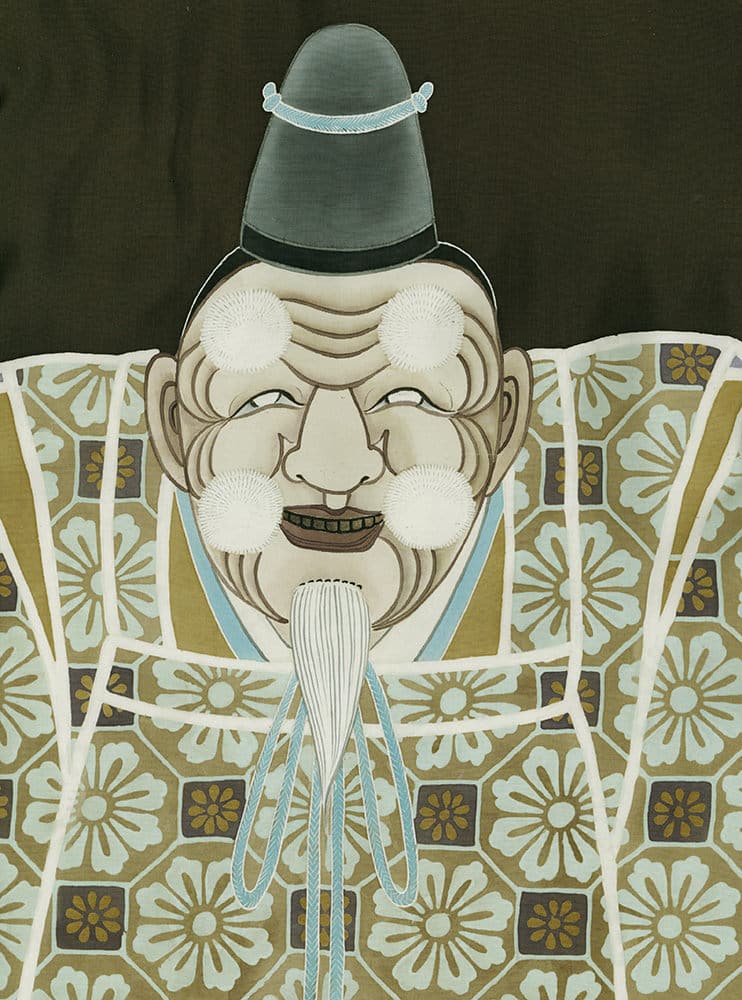 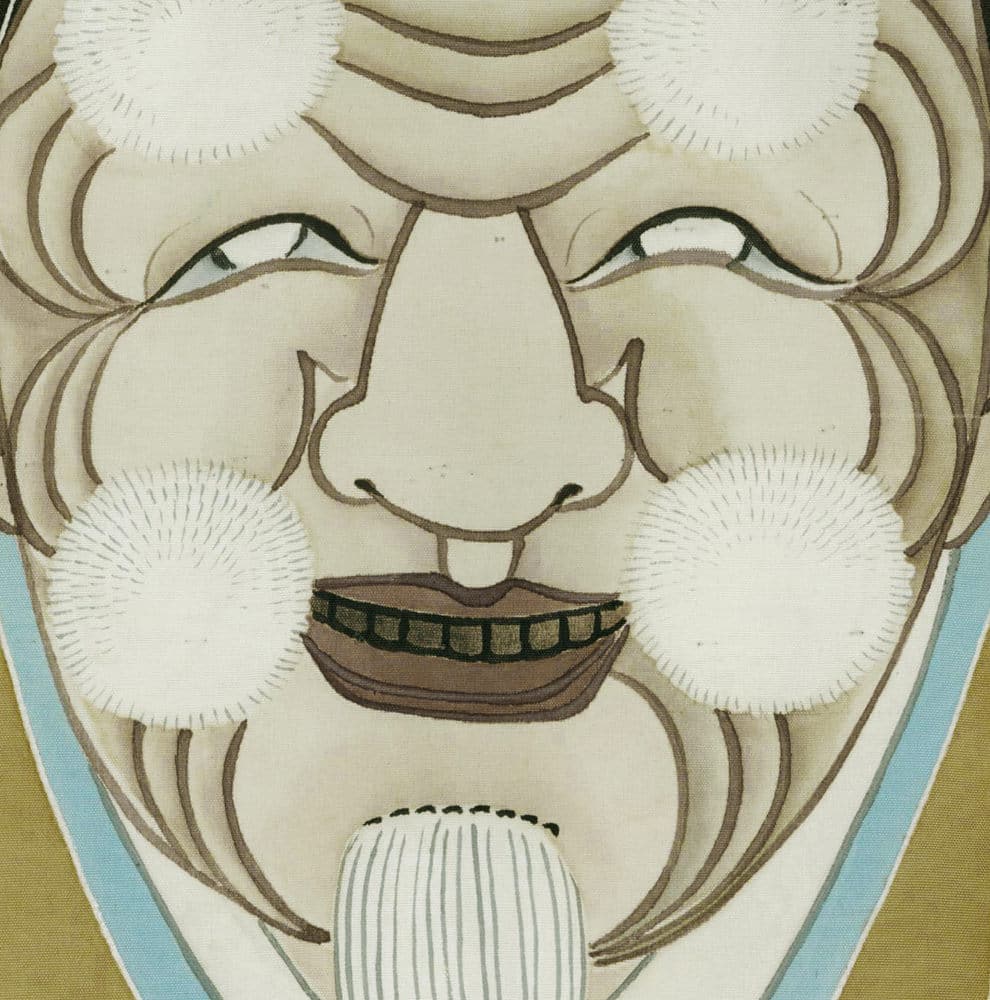 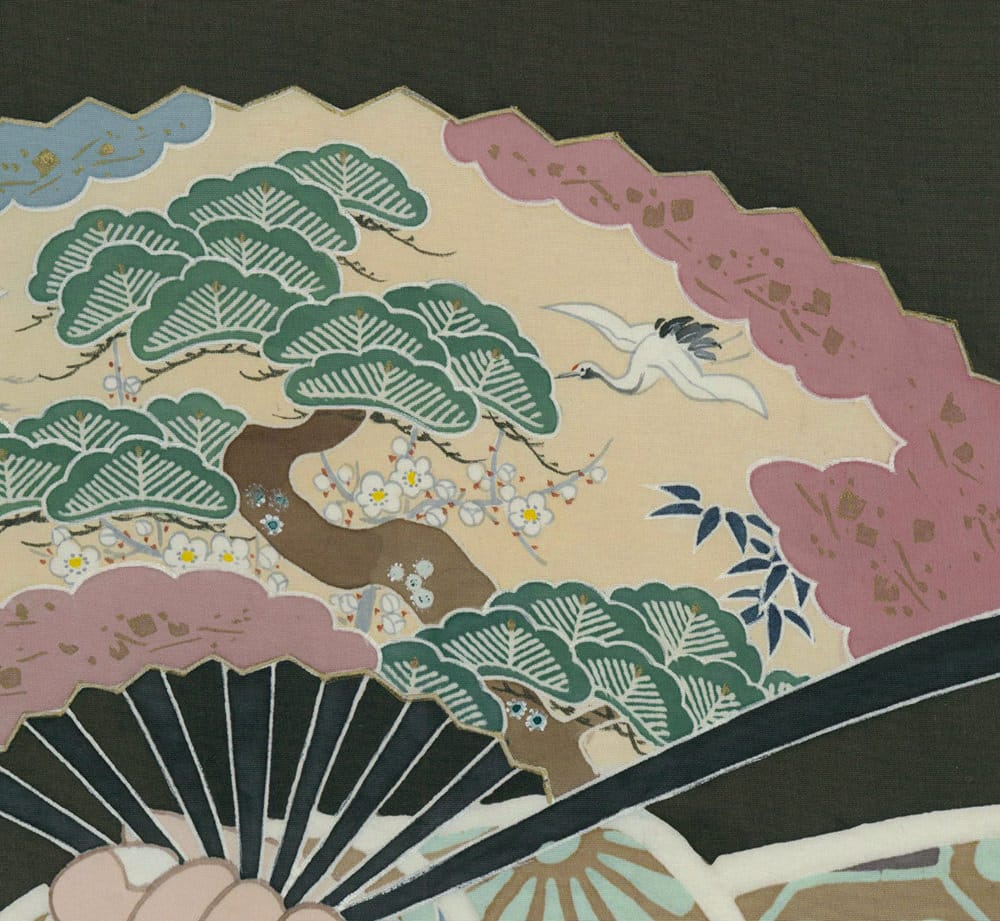 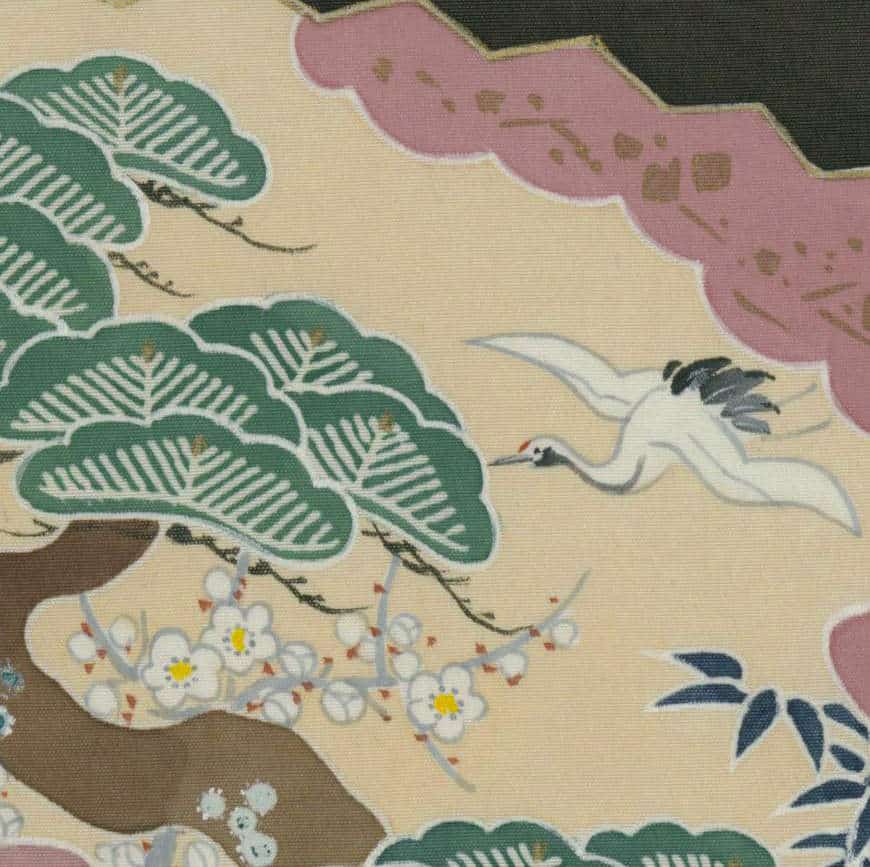 An exceptional plain silk miyamairi kimono used for initiating a baby boy at a Shinto ceremony. Yuzen-painting with freehand painting highlights. The back of this remarkable kimono is unique: it is completely dominated by the image of a Noh actor performing in the auspicious 'Sambaso'. 32" from sleeve-end to sleeve-end x 37" height. The front of this kimono is decorated with a number of family crest motifs. The 'Sambaso' is a traditional sacred dance performed prior to certain Noh plays, celebrating fertility and good harvest, with the additional intent to thwart earthquakes and appease the gods. It is performed at New Year, theater openings and other ceremonies; it is a noble piece, solemn and elegant, yet somewhat humorous. During the 'Sambaso', a man with the mask of an old man in long dark robes [not in this case!] and a tall hat enters with a fan. On his feet are tabi, Japanese split-toed socks. He uses a loud gruff voice and flaps his long sleeves to the beat of the drums. His feet primarily either slide from heel to toe, or stomp. His trunk remains static. When he glides, the performer moves in straight lines, in a box, making it feel like he is traveling long distances. The stomps are flat-footed, pressing firmly into the ground, and apparently are symbolic of harvest. A second man later joins the first on the stage. The two men face each other, and the newest wears the mask of an old man. The old man figure shakes a stick of golden bells in all directions, symbolizing happiness and harmony and forming part of a sacred ritual blessing. The stomping of Japanese dance is in great contrast to the jumps of ballet. While an oversimplification, Japanese dance tends to emphasize our connection to the earth versus some Western styles of dance that fight to defy gravity. In the case of this kimono, the Noh actor is carrying a fan which displays finely-rendered auspicious motifs representing good luck, prosperity and longevity for the child for whom the kimono was created. The family crest motifs on the front of this kimono include the small formal one representing 'bamboo', representing constancy and integrity, a popular family crest with warrior families. The enlarged crests include one representing 'mist', a motif popular for scrolls but not textiles; 'cloves' representing health, comfort and luxury; 'triple 'pestle' representing a tool utilized in the making of rice cakes served on festive occasions and so was regarded as a felicitous motif ; 'umbrella' representing the status of the nobility; single and triple horizontal stripes which have strong martial connotations' 'tomoe' representing Hachimon, god of war, possessing both religious and martial qualities; 'turnip' having quasi-magical qualities;' 'star' to represent the protective war deity "Myoken", and 'crossed sickles', signifying cutting down ones enemies.The type of motifs on this child's kimono suggest that the owners were a wealthy military family.

Price:
$
30,000.00
US
Available: Inquire
GalleryOrderingContactAbout UsGallery StatementNewsGlossary
Copyright © 2023 Yorke Antique Textiles
Thank you! Your submission has been received!
Oops! Something went wrong while submitting the form.