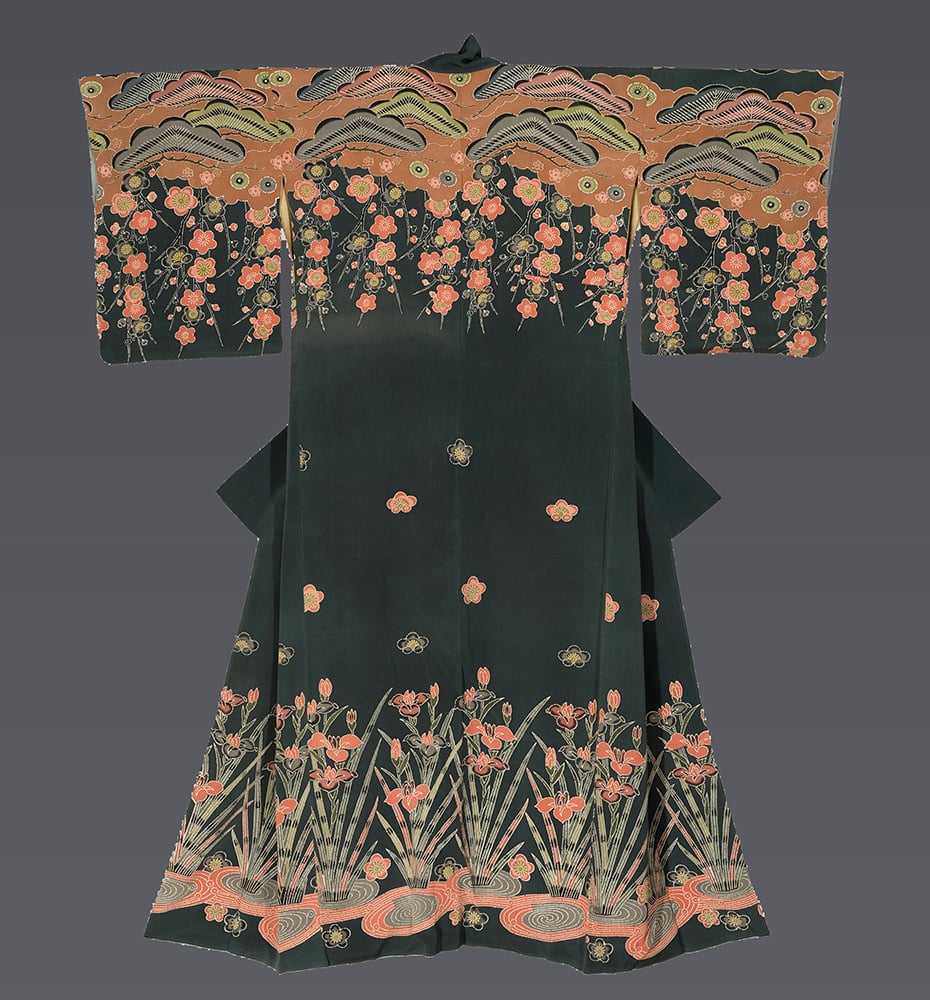 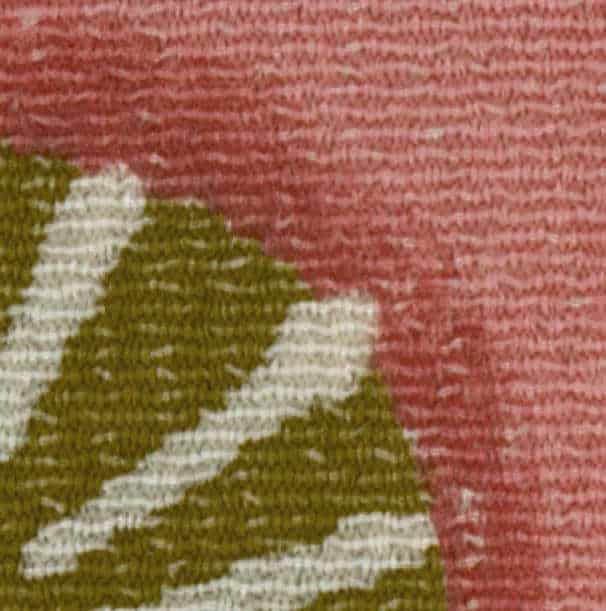 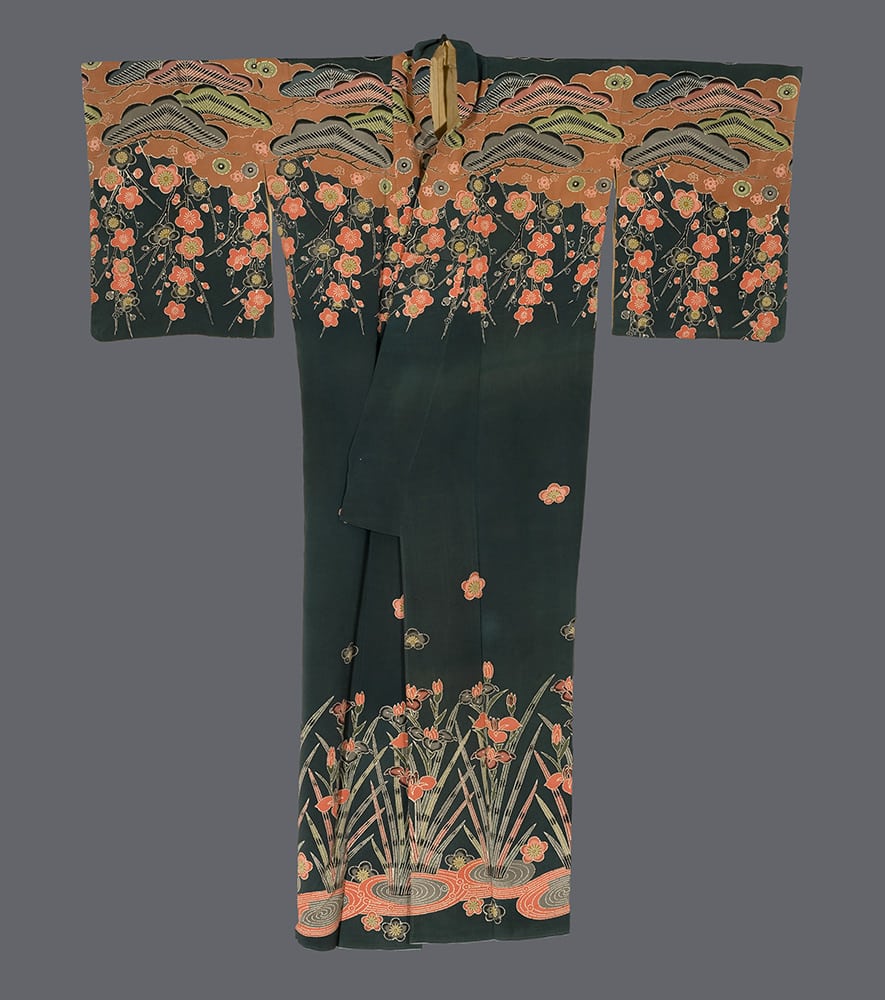 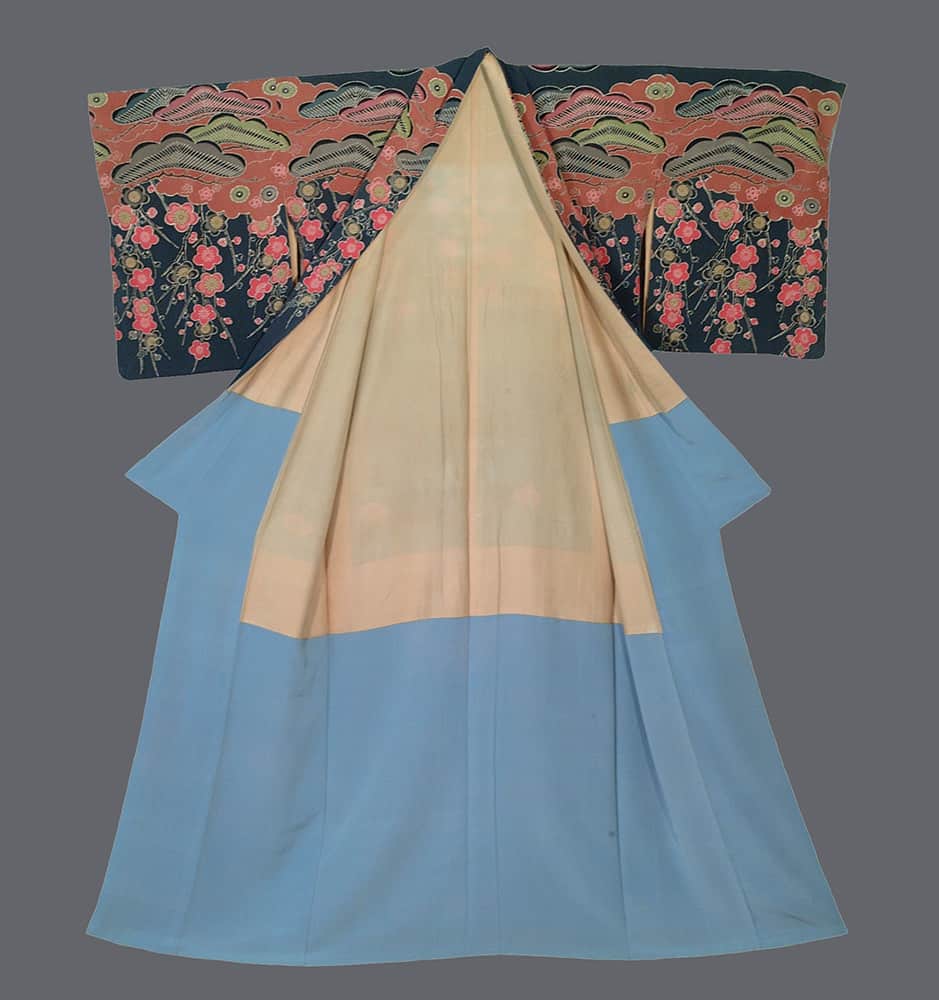 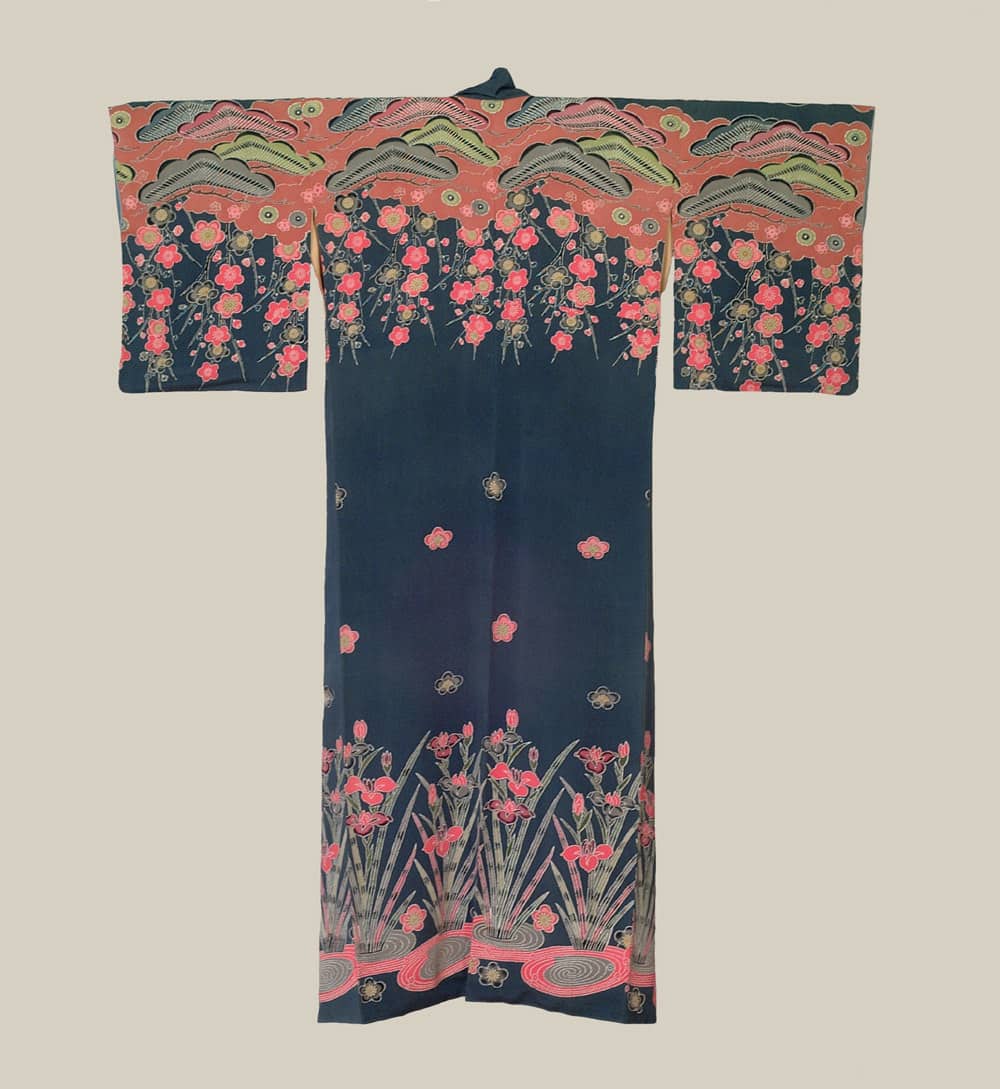 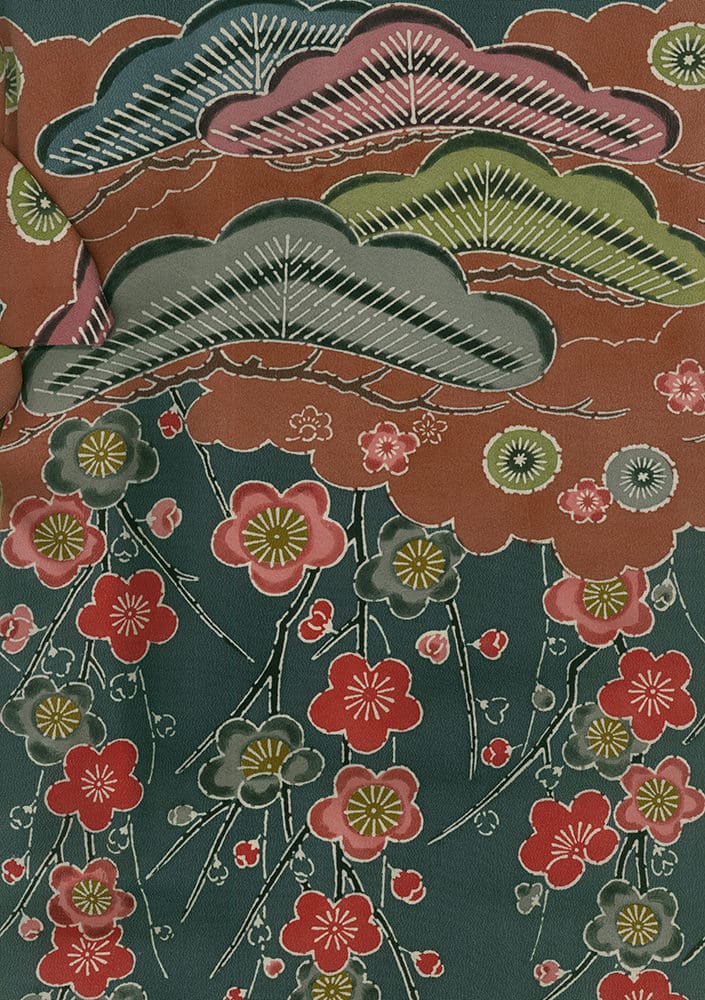 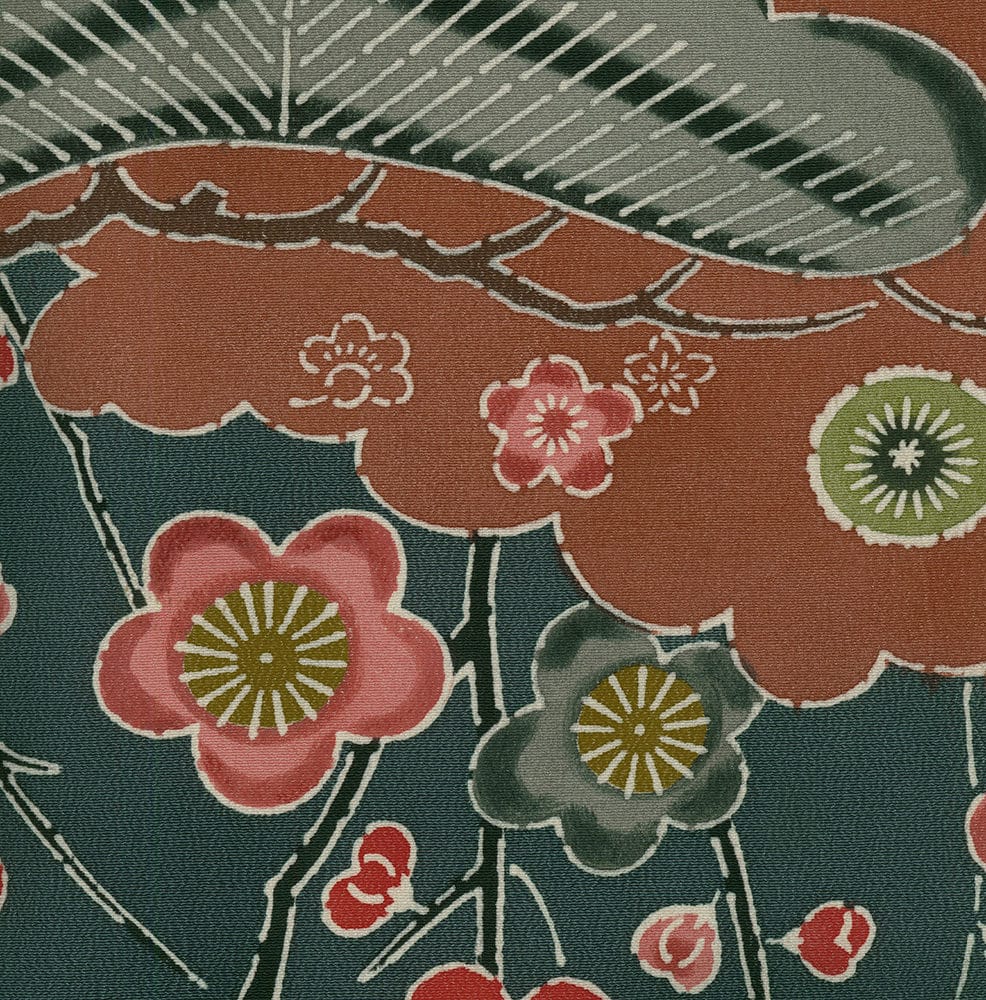 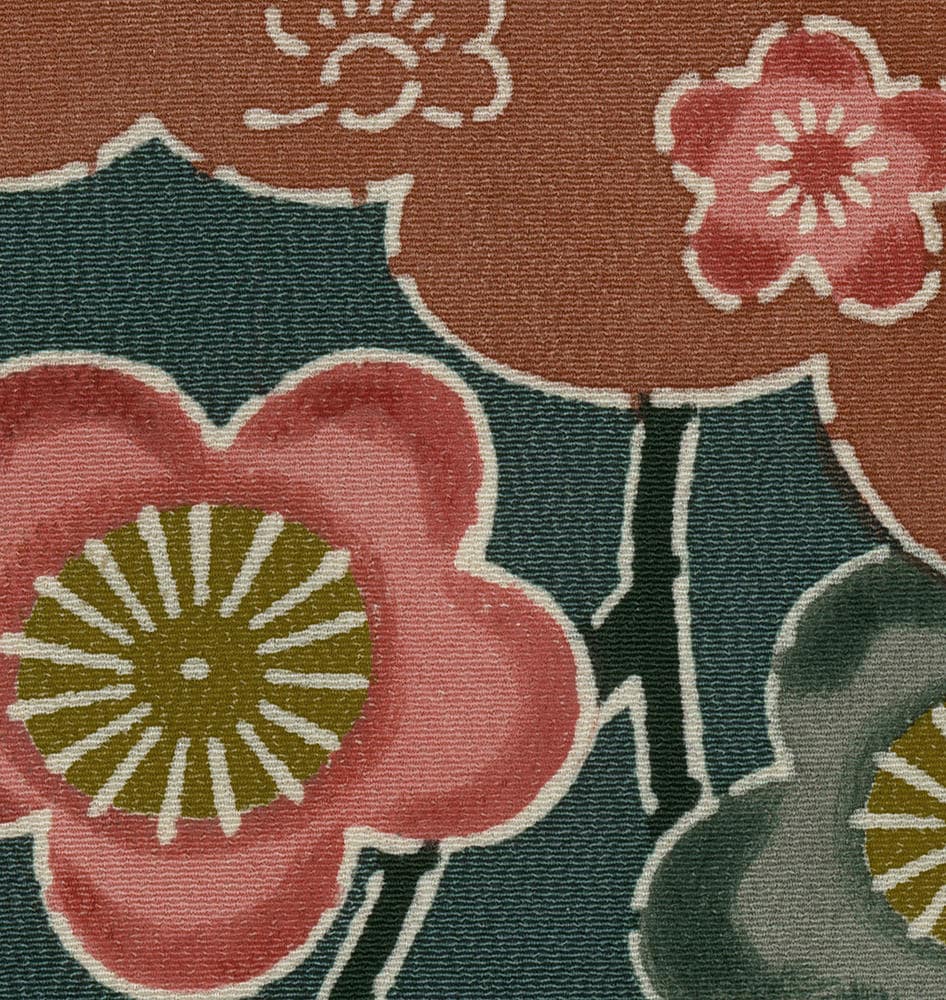 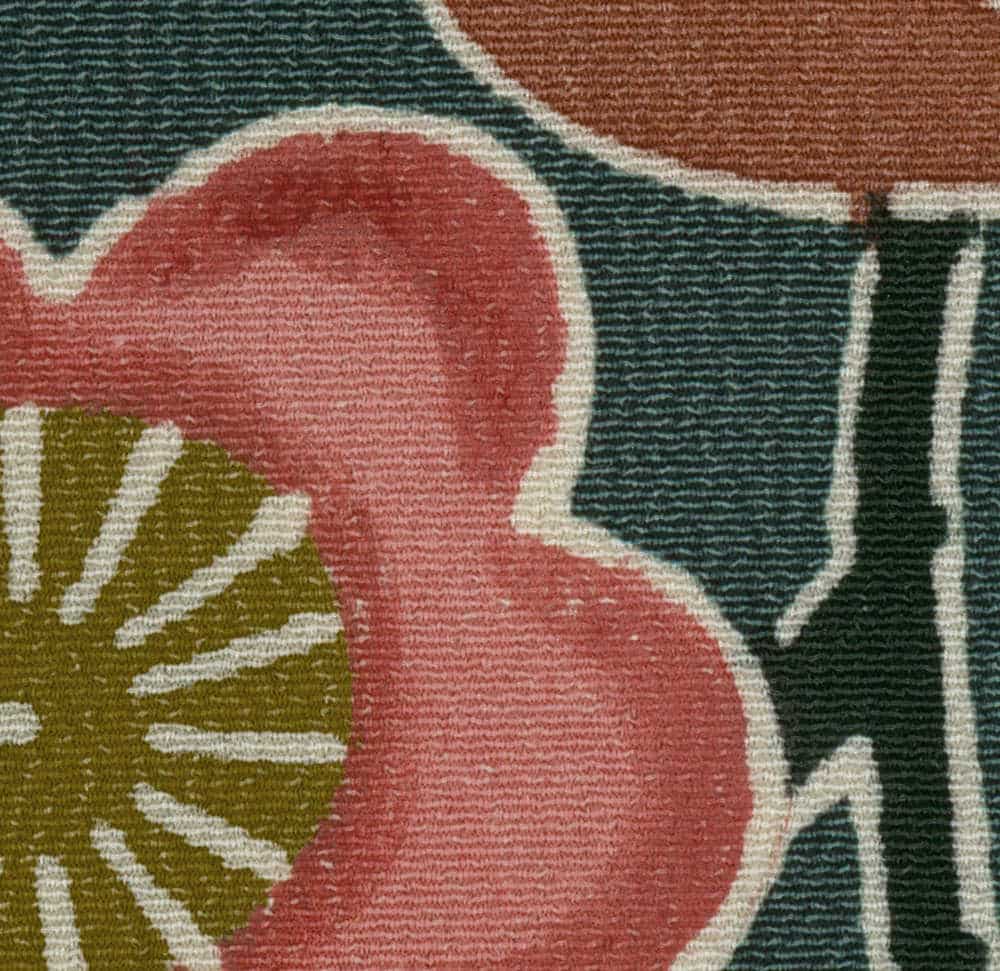 Older extant Okinawan bingata-patterned robes and kimonos are rare. Bingata robes were created using a specialized katazome (stenciling) technique unique to the island of Okinawa in southern Japan.  49" from sleeve-end to sleeve-end x 61" height.Okinawa and it;s surrounding islands was once part of the Ryukyu kingdom (1429-1879), when it was a prosperous trading center whose main trading partners were China, Japan and Southeast Asia.  During the 15th and 16th centuries, the Ryukyu Kingdom encountered various types of textiles in the Asian region, including block-printed fabric from India, wax-resist batiks from Java, and patterned fabrics from China.  China exerted a strong influence on the Ryukyu Kingdom.  Ryukyu's  most important and influential trading partner remained China.  Many among Ryukyu's nobility were intermarried with mainland Chinese.  With regards to textiles, the shape of the Ryukyu Court robes and some of the motifs bore Chinese influences, and several of the key dyes in their creation were imported from Fukien in southeastern China.  By the 17th and 18th centuries, artisans within the Ryukyu Kingdom had created a small yet very sophisticated textile industry.  The most renowned of these textiles eventually were referred to as "bingata", based on a complex and laborious technique involving stenciling and other techniques thought to have originated by incorporating a combination of Chinese, Indian and Javanese dyeing processes.  Bingata textiles were for several centuries reserved for the aristocracy: yellow robes for the royal family and blue for the remaining nobility. Larger motifs denoted higher rank and status. Bingata robes were also worn by Court-authorized dancers who welcomed important foreign delegations.  The robes were created from any of a range of materials, including cotton, silk, ramie, hemp, tunbian (agave fiber), or bashofu (banana fiber). Following the Japanese takeover of the Ryukyu Kingdom in 1879, and the renaming of the islands the "Okinawa Prefecture", the centuries-old monarchy was dismantled, and assimilationist policies were enacted.   Not surprisingly, Okinawans quickly adapted to Japanese ways, and seemed to embrace the strength and modernity that Japan represented in Asia at that time.Notwithstanding the fact that the kimono is a type of robe, we describe the gallery garment as a "kimono", and not a "robe" as researchers describe older Chinese and Ryukyu examples.  When one compares the dozens of existing 18th and 19th century Ryukyu robes in museum and private hands with this example, there are both similarities and differences.  Ryukyu robes predating the Japanese takeover in 1879 exhibit bright hues, with yellow, red and sky blue predominating. These robes also have slightly different tailoring: unlike kimonos, Ryukyu robes have sleeves that are fully attached to the main garment, and are completely open.  The collar/lapel on Ryukyu robes extends the full length of the garment, and often is rolled back to display the inner lining fabric a few inches. Lastly, Ryukyu robes typically were not intended to be folded under a wide obi (silk belt).There is at least one extant kimono/robe is tailored similarly to our example.  A 2016-2017 exhibition by the George Washington University Museum included a pale blue robe with similar tailoring as ours, but with a longer collar/lapel.  It's exhibition description is: "Woman's robe with pine bark, chrysanthemum, wisteria, swallows, mountains, and flowing water on an aqua ground. Shuri, Okinawa, 19th century. Private collection (on loan to the Okinawa Prefectural Museum and Art Museum).The motifs on our robe and the bingata technique involved are purely Okinawan. Our theory is that our robe was created within a few decades of the takeover and assimilation of Ryukyu culture by the Japanese following 1879. The Okinawan artists involved utilized that bingata technique and traditional motifs and layout, but in the endeavour to either please or emulate the Japanese, tailored the garment to more resemble the kimono of that time, and used the more somber color palette that was prevalent in Tokyo, Osaka, Kyoto and other Japanese urban centers. Perhaps significantly, the lower inner lining of this kimono is a pale blue of a similar hue of the main background color of the now-outlawed aristocratic Ryukyu robes.   Was choosing this pale blue a conscious decision to keep the aristocratic color tradition secretly alive, albeit hidden? Considering the silks and colors utilized, it is assumed that this very rare kimono would have been created during the period 1879 to 1912 (mid-to-late Meiji) for a wealthy Okinawan woman once from the disbanded aristocracy.